Happy new decade, readers! Many links have been collected over winter break for your enjoyment. I have only two resolutions: do my tiny part to roll back fascism in America, and finish the f*%$ing novel.

Writing for West Branch, the literary journal of Bucknell University, Kathryn Nuernberger reviews five recent poetry books under the heading “The Poetics (and Politics) of Spells”. Among them is the new collection A Sand Book from one of my favorite contemporary writers, Ariana Reines. Nuernberger examines how these books use techniques of ritual and magic, such as litanies and astrological concepts, to create poems that are a written artifact of a transcendent spiritual experience. Poems drawing on marginalized traditions like Vodou can also function as protection spells against racist oppression.

Fashion is another type of embodied ritual with a political dimension. At the literary journal ANMLY, the Issue #29 feature “Queering in Plain Sight: a folio of queer fashion” gathers creative writing and artwork that explores the frontiers of self-presentation. From editor Addie Tsai’s introduction:

These delightful, fierce, inimitable, and unapologetic contributions transcend the lines between genre just as we transcend the lines between gender, sexuality, aesthetic, and style. What we queers make of our bodies and community is how we insist on our own existence, then and now, especially in a world that works tirelessly to erase us, in small and large ways. The marvelous work included in this folio embraces all the layers of hybridity, just as we do. We are collages of our own making, in cut and line and color and seam and material and shade and skin and body. Sometimes, stitching ourselves to one another through the patterns our bodies make is all we have to get us through each year, each day, each moment.

I’m still reading this folio, but so far, I was especially struck by Miriam Bird Greenberg’s creative use of punctuation and line breaks to surprise the reader with multiple meanings, and Antonius-Tin Bui’s intimate yet glamorous genderqueer photo portraits.

It often seems like the mainstream image of queer style is a slender, tomboyish, young, white assigned-female-at birth person. Those folks are very handsome, no doubt, but the rest of us who don’t fit that body type can feel at a loss for personal style options. On the blog of clothing brand Qwear, founder Sonny Oram’s feature “9 Plus Size Cuties Share Tips for Androgynous Style” showcases larger butch and femme folks of different races who put together eye-catching looks from a mix of “masculine” and “feminine” pieces. Ree Melanen has inspired me to hunt down some vintage sweater clips as an alternative to my bowties and bolo ties. Personal shopper and stylist William “Beave” Brooks shows that you don’t have to give up pinks and florals to be a fine-looking dude. Check out Anastasia’s vintage clothing shop Androgynous God on Etsy, too.

The beleaguered Left in the age of Tan Dumplord is doing what it does best, blaming the most vulnerable members of its constituency for distracting the electorate from issues with supposedly broader appeal. Yes, I’m talking about the dangerous nonsense that is “gender critical feminism”, a cosmetic re-branding of transgender-exclusive radical feminism (TERF-ism), which is especially on the upswing in the U.K. In a still-timely 2018 piece at Tits and Sass, a journalism site written by and for sex workers, Juniper Fitzgerald lays out why “Gender Critical Feminism Is Fascism”. Both movements divide society into “us and them”, and evoke a mythical past characterized by a purity that we have lost.

The alliance between “gender critical feminists” and the alt-right has been forged on mutual bigotry: hatred for trans people and sex workers. “Gender critical feminists” are willing to sacrifice access to medical care, abortion, and self-determination in their alliance with the alt-right for the sole purpose of harassing, doxing, and generally inciting violence against trans people and sex workers.

Historically, factions of white feminism have flirted with fascism, from the overt racism of the Suffragists in the US to the Christian Temperance Movement here and abroad…

…While the alt-right conjures up mythic pasts that are entirely race-based and, of course, racist, gender critical feminists rely on myths about their own oppression. This is where their hatred for trans women and their hatred for sex workers intersect—in order to maintain the illusion that patriarchal oppression is solely rooted in genitals, secondary sex characteristics, and reproduction, gender critical feminists must create fantasies of “real” women and “unreal” women. According to gender critical feminists, trans women are not “real” because of secondary sex characteristics,while sex workers are likewise “unreal” because we complicate the notion that sex and reproduction are patriarchal tools for controlling women.

Certainly, the fact that we live under a heteropatriarchy is undeniable. And of course the sex industry, like all industries under heteropatriarchy, operates in specific ways on account of existing under oppressive social systems. But gender critical feminists argue that sex industry workers perpetuates these oppressive social systems, which is akin to blaming low-wage laborers for capitalism.

Looking back at another period of crisis, Lambda Literary’s article “Will We Survive the 1980s?” excerpts an essay by Bay Area writer and critic Steve Abbott (1943–1992), one of many talented artists of his generation lost to AIDS. In this piece, Abbott surveyed the tremendous progress in gay rights and visibility since Stonewall, but worried that his community would be nearly erased by the twin forces of the epidemic and consumerist assimilation. Was autoimmune disease the symbolic fruit of generations of internalized homophobia, the self turned against itself? The cure is not only medical or political, but spiritual and ethical:

To fight AIDS and the conditions that threaten us, we need more than scientific research, more than money, more than leadership. We need to rethink America’s spiritual, political, social, and cultural systems at the most fundamental root level. How do we use power? How do we use language? It is clear that what we are doing now—as bosses and workers, as men and women, as gays and straights, as whites and non- whites—is killing us all. And as we project these attitudes onto other species and towards the Earth’s ecological system, we are jeopardizing our very planet. I would argue that today we can no longer afford to see anything—not even “gay liberation” or our survival—as a separate issue needing a separate cultural, political or spiritual agenda.

This does not mean I intend to renounce my sexual orientation, far from it. Even in times of sadness or loneliness, it remains my greatest source of strength and joy. But if my sexuality is a social construct, I can change how I think about and act on it.

“Gay is good” doesn’t have to mean what I used to think—that I need a lot of sex or a lover to be happy. Nor need it mean the opposite—stoic celibacy. It can also apply to how I center and balance myself, how I choose and nurture friendships, how I support my community. And when I consider or have sex, can I change how I think about it—to admire, share, and enjoy beauty without trying to use, own, or consume it? Pleasure is good but we are not objects. And contrary to what fashion, ads and some songs suggest, neither are we just images or toys.

In work and play, how can I free myself from the hype of competitive stress? Can I learn to accept and find joy in the present moment, even when it’s not what I might prefer? Can I continue to take risks, to redefine myself? Can I wake up from sexism, racism, ageism, and careerism without becoming obsessed about being “politically correct?” Can I set and fulfill goals, while still allowing spontaneity? In short, can I take my energy glue out of the worry/fear/consumer trap?

What is the right amount of hedonism in response to oppression–enough to affirm that you have worth and deserve joy, but not so much that it becomes the opiate of the masses? One of the many things that jerks my chain, when Mother’s Day comes around, is the proliferation of “wine mom” gifts and cards in the supermarkets. One of our family members died of cirrhosis this year, so I have an extra reason to fume at the suggestion that a bottle of Merlot is your reward for another year of selfless emotional labor.

In this 2016 article at Quartz, Kristi Coulter observed that “Giving up alcohol opened my eyes to the infuriating truth about why women drink”. She details the places that have been invaded by compulsory boozing: the farmer’s market, the mandatory workplace mixer, the movie theater, the yoga studio. It’s absurd but infuriating too.

I’m newly sober and dog-paddling through the booze all around me. It’s summer, and Whole Foods has planted rosé throughout the store. Rosé is great with fish! And strawberries! And vegan protein powder! (Okay, I made that last one up.) At the office, every desk near mine has a bottle of wine or liquor on it in case people are too lazy to walk the 50 feet to one of the well-stocked communal bars we’ve built on our floor. Driving home from work, I pass billboard ads for Fluffed Marshmallow Smirnoff and Iced Cake Smirnoff and not just Cinnamon, but Cinnamon Churros Smirnoff. A local pharmacy, the same one that fucks up my prescription three months in a row, installs self-service beer taps and young men line up with their empty growlers all the way back to Eye & Ear Care…

…The longer I am sober, the less patience I have with being a 24-hour woman. The stranger who tells me to smile. The janitor who stares at my legs. The men on TV who want to annex my uterus. Even the other TV men, who say that abortion should be “safe, legal, and rare.” What the fuck business is it of yours whether it’s rare or not? I think.

And then I start to get angry at women, too. Not for being born wrong, or for failing to dismantle a thousand years of patriarchy on my personal timetable. But for being so easily mollified by a bottle. For thinking that the right to get as trashed as a man means anything but the right to be as useless.

I don’t have a lot of good things to say about my family of origin, but they deserve props for not having a culture of alcohol use to distract from their problems. My bio mom only used liqueur to flavor baked goods. Those Calvados pancakes were top shelf. 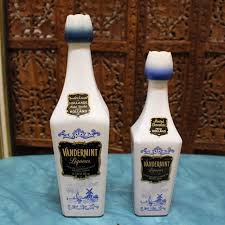 Ah, Vandermint… why did they discontinue you?