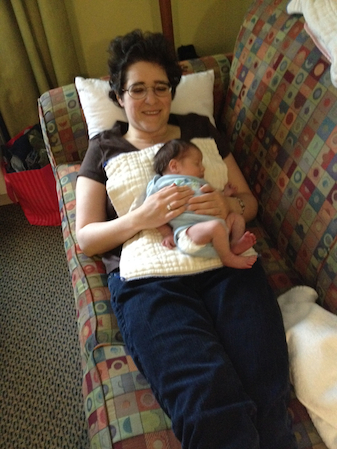 Blogging will be light for the next 18 years…

Yesterday, Good Friday, I attended the Stations of the Cross liturgy at our church. As we walked through the episodes of Jesus’s condemnation, crucifixion, and death, one phrase from the first station loomed largest in my thoughts: “He did not spare his own son, but delivered him over for us all” (Romans 8:32).

If you believe, as I now do, that a primary aspect of the Good News is the decoupling of power and domination, this verse could be read as a rejection of nepotism — a statement of God’s total solidarity with all people, from the lowest to the highest. When human beings acquire wealth and power, we tend to give preferential treatment to “our sons”, the ones we consider our kind of people, hoarding more resources for them than they need, at outsiders’ expense. Jesus’s parables portray God as king, land-owner, judge — all positions that humans have used to dispense unfair advantages — in order to underscore that God is not that kind of authority figure, and neither should we be.

However…as a survivor of familial violence, I also felt triggered by the image of a father who put other agendas ahead of protecting his son, whose safety was his special responsibility.

Before I incorporated this trauma into my political and spiritual identity, all I wanted from Christianity was a safe place to move beyond it. (And I’m grateful that, for the most part, I found it.) In those days, God forgive me, I would have been too quick to explain why the latter response to Romans 8:32 was a misreading.

Now, I think it’s essential that the abuse-triggering interpretations be allowed to stand alongside the positive, healing ones. Not to undercut Christian doctrine in a reductionist psychological way, and not to compete with its claim to be the single “correct” response to the Good Friday story.

Rather, in this season of repentance, those trauma reactions should be heard to indict us, our community, our society, for having created the conditions where a person would be unable to believe in a loving Father or a willing sacrifice.

This is not merely a private problem for the survivor to work out between herself and Jesus so that she can bring her feelings into line with ours. Our job is not to save her by making her one of us, but to listen to her prophetic voice outside the gates (a place where Jesus spent a lot of time) so we never forget that the church’s central task is to model an abuse-free community, where power is exercised only as loving servanthood.

Truth Wins Out, a watchdog organization battling homophobia and “ex-gay” misinformation, reports today that seniors at Minnesota Catholic high schools are being forced to attend lectures about the superiority of “traditional marriage”, in which the presenters bash not only same-sex couples but single parents and adoptive families. At DeLaSalle High School in Minneapolis, for instance, the presenters (a priest and a married couple sent by the diocese) called adopted children “sociologically unstable” and implied that their families were not normal. Fortunately several brave students spoke up against this bigotry.

There’s much to discuss here, and I encourage you to read the Truth Wins Out post (and donate some money to these guys). What I want to highlight is the natural alliance between gay/lesbian and adoptive families, a connection whose full potential has not yet been realized.

Yes, straight married couples who adopt children — your family is queer, too. Stay with me for a moment.

As my husband and I have made our way through the process of domestic open adoption, we’ve come to understand and embrace the fact that our future child, not unlike Heather, will have two mommies (and two daddies). There’s Adam and me, the child’s “forever family” in current adoption jargon, but also the birthparents, who in ideal circumstances will always remain part of the child’s life. (Terminology check: Domestic means the baby is born in the United States. Open adoption means that there is continuing contact with the birthparents and possibly other members of the biological family.)

“But won’t he be confused?” is one of the most common objections that we hear. Same-sex parents, stop me if you’ve heard that one before. Why should it be confusing to have more people in your life who love you? Why should parents be ashamed that their child was “born that way”?

My commitment to open adoption has grown in tandem with my gay-rights activism. Both share an antipathy for the closet. Of course, everyone has the right to be discreet depending on the safety of their environment. But pretending that your child was not adopted — denying the strength of his connection to his birthfamily — has some of the same invalidating effects as rejecting his sexual orientation. Both are about denying him the right to love whom he chooses.

Adoptive parents are not as political as we could be. Partly it’s because we’re afraid of rocking the boat, and partly because the process is such a challenge that it’s tempting to make life easier by “passing” when you can. I read once that there are 50 waiting couples for every one healthy Caucasian newborn. Throw in the bureaucratic intrusiveness of the homestudy, and the popularity-contest aspect of crafting an online profile that will appeal to birthmothers, and you can see why adoptive parents feel crushing pressure to appear “normal”.

However, I believe adoption shame comes from the same poisonous roots as internalized homophobia. That’s right girls, I blame the patriarchy.

Like many religious defenders of “traditional marriage”, the Minnesota archdiocese absolutely has to privilege procreative sex over other forms of human bonding, or their case for the unnaturalness of same-gender love collapses. Biology is destiny, and the woman’s destiny is to be a womb. In this analysis, a woman who can’t or won’t procreate is a failed woman, and her chosen devotion to her adopted child is not equal to other forms of motherhood, because it merely originates in her will — and God forbid that a woman’s own intentions should outweigh her biology! Hence the fear that the adoptive mother’s already-undermined authority will be threatened by competition from his “real” mother. Adoptive parenting permits a woman to exercise a creative power that is not in subjection to her gender, and for that reason it must be devalued by patriarchal religious leaders, however much they claim to be pro-life.

Adoptive families can learn from queer and feminist analysis that different doesn’t have to mean unequal. We should also be more active in speaking out against the idolatry of the procreative nuclear family, because this hurts our own children as much as it does same-sex families. Love is the new normal.