Nowadays, more often than not, when I listen to a sermon or read a Christian spiritual guide with friends, a moment will arise when my inner reaction to the text seems contrary to what everyone else is getting out of it. They’re seeing an inspiring picture on the right side of the tapestry, while I’m underneath looking at the loose threads and snarled knots. Like the optical illusion that’s either a vase or two kissing faces, one can at best switch back and forth between these two views, not hold them side by side. Or so I tell myself, those times when I keep my critique under wraps, not wanting to be the death’s-head at the feast who spoils the faith that others need for comfort.

I don’t know that I have less faith that my neighbors in the pews, just faith in different things, and perhaps too little patience with beliefs and attitudes that (in my opinion) distract from our most urgent afflictions and their best cures. Astute readers of this blog will remember that I’ve always been this way, but also notice that my priorities list has been more changeable than my fervor. This awkward mutability gives me another reason to think twice before challenging the group’s consensus.

As far as is consistent with kindness and timeliness, of course, I nonetheless believe every serious engagement with a spiritual text should eventually include the deconstructionist questions, “What is the power position of the author and his/her assumed audience?” and “What perspectives are being left out?”

Advocates of traditional, conservative education (and such a one was I!) have confused deconstructionism with moral relativism. Quite the contrary. The questions above are attempts to bring a consciousness of justice into how we read a text, to take responsibility for our standpoint and our blind spots.

True, in the prideful and competitive culture of academia, these questions have been deployed in bad faith, to dismiss intellectual rivals by labeling them “oppressors”, exactly as their conservative Christian counterparts would exploit the label “heretics”. But the inquiry into power dynamics and incompleteness need not be a bug hunt. It should simply be a nonjudgmental acknowledgment that no text is completely satisfying because the ideal community is always more diverse than one perspective can encompass. This acknowledgment would clarify that members who enter the discussion from an unrepresented standpoint are welcome contributors, not spoilers.

For instance, I belong to a weekly discussion group that’s currently studying the Examen, a daily prayer practice developed by St. Ignatius of Loyola. One of our members, a retired priest, observed that this practice was developed by monastics who had the privilege of contemplation because their daily subsistence needs were met by the community. We have a similar luxury of prayer time as middle-class Americans, if we choose to use it that way, of course. He wondered whether the Examen would be possible or relevant for a desperately poor person such as those he had served in his past congregation–someone whose entire attention was taken up with keeping her kids fed and her house from collapsing.

I found this question uncomfortable in a good way. It added another layer to the repentance and gratitude themes of the Examen by reminding me that my experience was not the center of the universe. It opened the door to other fruitful questions: Is contemplative prayer at the top of Maslow’s hierarchy of needs, worth considering only after basic physical security is established? Or is it necessary at every level of survival, so that (as the Buddha would say) we don’t add to our suffering by becoming entangled in fear, anger, and greed? If the latter, how would the Examen best be adapted to be useful and validating to someone living on the margins? To take that question seriously, we would have to work harder to include such people in our discussion group, instead of making guesses about their spiritual needs from our standpoint.

My prison pen pal “Jon“, who is serving a life sentence in California for a burglary-related homicide, continues his efforts to grow in self-awareness and spiritual maturity through writing. I thought this recent poem was one of his finest, expressing compassion for his child-self alongside remorse for the flawed path he took as an adult. It’s a simple but deep story that I imagine many troubled young men will recognize as their own.

Of Father, From Prison

I used to smile in wonder
at the barb of the fish hook
and however you managed to get worms
so delicately placed and pierced.
Then even when you showed me how
I still couldn’t do it on my own
and sometimes couldn’t bear to look.

I used to sit and wander
as the landscapes became cities
with people beneath the lights of day.
Drifting by in gusts of winds
of mountaintops and Mayberrys
and cow filled fields and stars.
Watching from the passenger seat
while you drove your precious truck
and I waited for my turn
that had finally never come.

I used to be amazed
at all the grand and well told stories
of the life you really never led.
I realized I never even knew you
when I noticed they were lies.
You were gentle, very quiet
always private and reclusive.
You could fix anything inanimate
yet never repair the troubled minds
of yourself or those around you.
And I can think of all the places
you would take me as I grew.
Leaving us with memories
of decaying and joyless days,
of worms, fish hooks and barbs.
And I would be amazed
if you ever came to know
how very much alike
we’ve finally become.

I do not wander in wonders anymore
but sometimes think of who you are.
You living in your solitude
and me stuck within my own.
Where computers are your company,
while books become my best of friends.
Your prison is in a house
and mine within a cell.
Inside the worlds of our own making,
trapped within our mortal shells.

I recently got an email from Bill Reiter of Iowa, a poet, Vietnam veteran, and National Endowment for the Arts grant recipient for playwriting. We haven’t been able to confirm whether we’re related, but all Reiters are welcome at the Block. He kindly shares this poem with our readers.

Who is like the Lord our God, the one who sits enthroned on high?…He settles the childless woman in her home as a happy mother of children. (Psalm 113:5, 9) 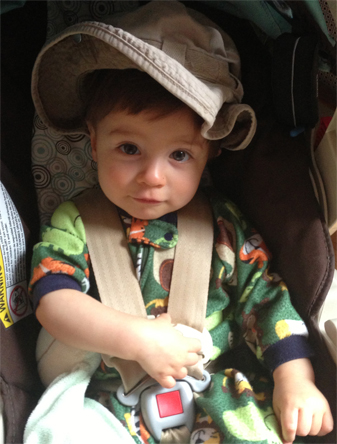 Mother’s Day has always been a difficult holiday for me. Unlike Christmas or Thanksgiving, there’s no larger goal to take the focus off one’s personal life and the ways it conforms or fails to conform to a Hallmark card.

Because of her trauma issues, my biological mother never felt sufficiently loved or special. On Mother’s Day, she was especially disappointed and confused by the contrast between how she was supposed to feel and how she actually felt. No matter what we did, it wasn’t enough. Now that she and my other mom are apart, her ex-partner has had space to grow into the mother I need, no longer forced into the shadows. But it’s been a long time coming.

Many infertile and waiting adoptive moms can relate to the loneliness of those years when Mother’s Day came around again and we still didn’t have our child. We belonged to an unseen minority who couldn’t help but recognize the complexity of this thing we call “motherhood”, so oversimplified by the sentimental mainstream. Birthmothers, too, may wonder what this day should mean to them. There are no words for loss in the language of this holiday, just pink flowers and brunch and cards that say “you’re the bestest”.

Last year, on my first Mother’s Day as a mom, I was depressed, and ashamed of it. I loved my one-month-old son. I was so proud to sit in the “parents with small children” pew in church for the first time ever. But the pain of our adoption journey hadn’t healed. I felt pressured by the rhetoric of motherhood to pretend that everything was hearts-and-flowers, that this moment made all the past betrayals worthwhile.

It didn’t help that it coincided with the date when our birthmother’s consent became irrevocable. Now it’s REAL. Help me, mommy! I called her up to give her good wishes and support. Her confidence in me, her comfort with her decision, made me believe I really deserved to celebrate, at last.

Just as I push back against aggressive projections of masculinity onto my 13-month-old (I swear, he comes by that cowboy swagger naturally), I continue to deconstruct the false choices inherent in popular ideas of motherhood. Adulthood and sacrifice versus immaturity and freedom. Being ridiculed for hypervigilance yet blamed for anything that goes wrong with one’s child. Mothering, as opposed to generic “parenting”, is by definition a female activity. And we all know what fun it is to be female in our society. Maybe that’s one reason I was so afraid of it.

Therefore, mothering, for me, is also an invitation to lean into the political responsibility that goes along with adulthood. This passage from the “Motherhood and Daughterhood” chapter of Adrienne Rich’s Of Woman Born spoke to me during those early days of transformation into Shane’s Mom:

The “unchilded” woman, if such a term makes any sense, is still affected by centuries-long attitudes–on the part of both women and men–towards the birthing, child-rearing function of women. Any woman who believes that the institution of motherhood has nothing to do with her is closing her eyes to crucial aspects of her situation.

Many of the great mothers have not been biological. The novel Jane Eyre…can be read as a woman-pilgrim’s progres along a path of classic female temptation, in which the motherless Jane time after time finds women who protect, solace, teach, challenge, and nurture her in self-respect. For centuries, daughters have beem strengthened and energized by nonbiological mothers, who have combined a care for the practical values of survival with an incitement toward further horizons, a compassion for vulnerability with an insistence on our buried strengths. It is precisely this that has allowed us to survive…

We are, none of us, “either” mothers or daughters; to our amazement, confusion, and greater complexity, we are both. Women, mothers or not, who feel committed to other women, are increasingly giving each other a quality of caring filled with the diffuse kinds of identification that exist between actual mothers and daughters. Into the mere notion of “mothering” we may carry, as daughters, negative echoes of our own mothers’ martyrdom, the burden of their valiant, necessarily limited efforts on our behalf, the confusion of their double messages. But it is a timidity of the imagination which urges that we can be “daughters”–therefore free spirits–rather than “mothers”–defined as eternal givers. Mothering and nonmothering have been such charged concepts for us, precisely because whichever we did has been turned against us.

To accept and integrate and strengthen both the mother and the daughter in ourselves is no easy matter, because patriarchal attitudes have encouraged us to split, to polarize, these images, and to project all unwanted guilt, anger, shame, power, freedom, onto the “other” woman. But any radical vision of sisterhood demands that we reintegrate them. (pgs. 252-53) 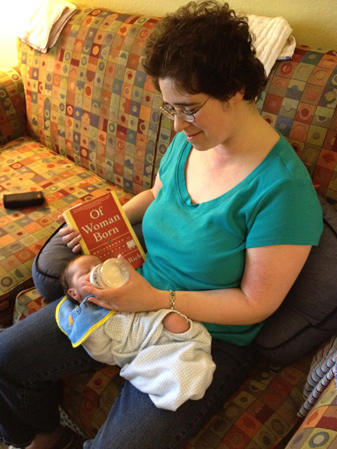