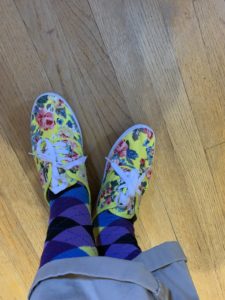 As part of my ongoing wardrobe reorganization, I was planning to wear a different pair every day, but it’s been shorts-and-sandals weather for the past week and a half. Guess I’ll have to try again in…Toe-vember.

I have decommissioned six bags of ladies’ formal attire this month, some with the tags still on. “Dries van Noten! Tahari! Escada!” I lamented to my husband, for whom these words have less meaning than Pokémon names.

One vintage pleasure that never gets old, for me, is the Richard Tucker Opera Gala that was televised on PBS in 1994. A couple of years after seeing “The Phantom of the Opera” musical (a classic “do I want to marry him or be him” figure for gay trans boys), I had become a full-blown opera nerd. This gala was notable for Samuel Ramey’s mesmerizing performance as the charismatic, sinister Reverend Olin Blitch from Carlisle Floyd’s “Susannah”. Watch it on YouTube. In this retelling of the Bible story of Susannah and the Elders, set in the American South, a young woman is falsely denounced by the Reverend as a sinner when she refuses his advances. Later, I had the great privilege of seeing Ramey perform this role at Lincoln Center with the fantastic Renee Fleming as Susannah. I was reminded of it when I read Floyd’s obituary last month. The great American opera composer died on Sept. 30 at age 95.

In a more modern variation on this theme, feminist philosopher Sara Ahmed analyzes “How the Culture of the University Covers Up Abuse” in an article for LitHub, excerpted from her new book Complaint! (Duke University Press, 2021). She examines “collegiality”, the loyalty of faculty to one another, as an obstacle and an indicator of what type of person “belongs”. In a choice between loyalty to two faculty members, one of whom accuses the other of abuse or harassment, “collegiality” often weighs in favor of the person who is most similar to you in terms of race, gender, power, or background. This dynamic continually forces younger and more diverse colleagues out of the system.

The institutional fatalism I have been describing…which converts a description (this is what institutions are like) into an instruction (accept this), is also often familial. In other words, you are supposed to accept harassment and bullying because that is what families are like…

While I’m indulging in 1990s nostalgia, remember when the libertarian/classical liberal wing of the conservative movement was about more than refusing to wear a COVID mask in Wendy’s? That’s when I was a susbcriber to Reason Magazine, which still publishes some good articles about protecting real civil liberties, like this piece about the oppressiveness of the cash bail system. In “Cashed Out”, Leah Libresco Sargeant describes why the Brooklyn Community Bail Fund transitioned from paying poor defendants’ bail to lobbying for the abolition of bail altogether.

Bail funds had looked like a way of outsmarting the system: Courts could keep setting bail, but a bail fund operated as a kind of nullification of the prosecutor’s recommendation and the judge’s decision. The revolving money seemed to many bail fund donors, including me, like a way of turning tragedy into farce. But the BCBF team had come to believe they’d essentially been conscripted into the carceral system they wanted to dismantle…

Bail funds let politicians get the softer outcome they wanted without having to put their names to an attempt to change the law. The BCBF’s solution was to force lawmakers to confront the costs of the current system…

When the overwhelming majority of defendants whose bail is paid by a bail fund—and who thus have none of their own money at stake—show up at trial, it undermines the premise that cash bail was the least-restrictive option available. Those defendants didn’t need to have money on the line in order to come back.

At the Ploughshares blog, Calvin Gimpelevich writes about navigating Jewish and working-class ideas of masculinity during his transition in “Among Men”. Judaism historically placed more value on scholarly achievement than on brawn as the chief virtue of manhood. This can be good news for us mascs who can’t hammer a nail straight. But this archetype also has a fraught history of anti-Semitic polemics linking Jews to queerness and degeneracy. Gimpelevich discusses how such anxieties were internalized by European Jews who wondered whether their people had become too physically weak to fight oppression. Later, male Jewish-American intellectuals like Norman Mailer displaced these insecurities into misogyny and imperialism. Gimpelevich doesn’t take sides in this battle of masculinities, but carefully explores the pros and cons of both. (I had a special fellow-feeling for the author when he disclosed that he has face-blindness and can’t drive. We are a type.)

In this 9-minute video, Rabbi Abby Chava Stein gives an engaging talk about Talmudic support for transgender identities. I recently read her memoir, Becoming Eve: My Journey from Ultra-Orthodox Rabbi to Transgender Woman (Seal Press). It’s an inside look at life in one of the strictest, most separatist American Jewish communities. One can’t deny that she knows her theology backwards and forwards!

An unexpected side effect of my transition is that I spend almost as much time thinking about breasts as my husband does. Other people’s breasts (more interesting than I thought); my breasts (dysphoric but pleasurable); whether it helps to call breasts something else (chesticles?); whether the problem resides in the body or in others’ reactions to it. In Allie Spikes’ essay “Minimizer” in Gulf Coast (Fall 2021), about her breast-reduction surgery, she delves into the contradictory messages she received about her body as a young Mormon woman: look fertile enough to attract a husband, but not so voluptuous that you lead men into temptation. Big breasts create forced visibility, and visibility is unsafe–or at any rate, burdensome and confusing–in a society that feels entitled to project moral values onto your body.

I’m still thinking about the book talk I attended online for Da’Shaun Harrison’s Belly of the Beast: The Politics of Anti-Fatness as Anti-Blackness. Harrison has been posting proud pictures of themself on Twitter lately–beard, belly, and breasts. I am encouraged by the way that they embody queerness as its own style, not an imitation of white cis gender norms. In their talk, they cautioned against surgery that came from a place of internalized bias against one’s own body type, arguing that mainstream gender roles were specifically defined in opposition to the Black “other”. It’s an unsettling thought, because I also know how I can deceive myself with theory, arguing myself out of my feelings. But I really think I should read this book.

So it’s a radiant early-autumn day and I’m walking downtown to get some fish tacos, listening to a Food4Thot podcast on my headphones, when I happen to smile at this woman’s little dog and she stops me to say that God nudged her to speak to me. Apparently I haven’t yet mastered the genial indifference to strangers that is the hallmark of cis men, so I unplug my earbuds and politely listen to her rhapsodize about her church where God heals the sick and raises the dead. This may well have been the same woman from this 2018 blog post; autistic face-blindness means you get to be annoyed by the same person twice.

I manage to be happy for her happiness until she starts urging me to search online for testimonies of people’s visions of the hell that awaits unbelievers. I interrupt her, firmly but with a smile, to say that I don’t believe that only Christians go to heaven, or that God torments anyone for eternity. But the visions! She can admit no disagreement. “And I’m transgender and happy about it, so thanks but goodbye,” I retort, starting to walk away. She hasn’t brought up the LGBTQ issue, but this is generally a good way to shatter the façade of love-bullshit. “I’ve known people who’ve been delivered from that, from homosexuality,” she calls after me, and I call over my shoulder, “That’s bigoted,” and plug back into Spotify just in time to hear Denne Michele say, “Trans is beautiful!”

Why did this bother me enough to write about it? I have no anxiety about the eternal destiny of my gay-ass soul…but I once did. And it upsets me that Christian supremacy is so normal that strangers have the chutzpah to use these scare tactics. This lady’s emotional register went from ecstasy to threat in under two minutes. And she might really have been motivated by concern for me, rather than simple arrogance. I was once close friends with an evangelical woman who’d been raised in a missionary denomination. As brutal as the doctrine sounds to outsiders, Calvinist predestination appealed to her because it relieved her of the obsessive anxiety to force everyone she met toward salvation. Leaders fill their flock with fear that they spread to others like a virus.

Microaggressions are little mundane irritations that hurt because they hint at larger oppressive dynamics underneath. They’re behaviors that are still acceptable in “polite society”, that remind you that your inclusion is conditional. They can be so stupid that you feel you should be strong enough to laugh them off, but somehow you’re not, and that adds to the shame.

Hellfire evangelism feels like a microaggression because this person is trying to traumatize me. I’m just walking down the street laughing at pre-recorded dick jokes from August (because, like Denne, I am always late catching up with media) when somebody decides to frighten me into an existential crisis. For the evangelist, a successful interaction would result in me imagining myself in horrible pain, which I can only alleviate by becoming exactly like her. Sounds pretty abusive when you lay it out clearly.

Though I had the privilege to laugh this off, I was also traumatized vicariously on behalf of the many vulnerable queer people who might harm themselves, or be harmed by others, as a result of this theology. Underneath the concern for my eternal bliss is the demand to worship a god who sees everyone outside a certain demographic as subhuman, unworthy of empathy.

As of today, I am not delivered from transsexualism; few heavenly pleasures can compete with the superior pockets in men’s trousers. I am left with a more complicated theological question, however. How should I interpret these reported visions of the hell for unbelievers? What were they really seeing? And how do I exercise discernment in interpreting my own spiritual intuitions, dreams, and guided journeys in Witchcraft class? Our head witch in charge, Christopher Penczak, teaches that we avoid delusions by consistently practicing introspection and psychic self-cleansing (which includes therapy). We learn techniques to become aware of the different levels of our psyche and clear them of harmful thoughts and attachments. I’ve never been in a church that paid such attention to sanity-maintaining tactics or offered a specific framework for developing spiritual discernment.

As for the visions of heaven and hell, Christopher has also said that when we’re in a visioning state, we will perceive ineffable spiritual realities via the images and concepts that work best for our minds, which is different for everyone. Maybe those Christians did see something terrifying in a dimension adjacent to this one. I can credit the genuineness of their experiences without drawing identical doctrinal conclusions.

Or maybe Christopher Moltisanti is right, and hell is an eternal party in an Irish pub. Sláinte!