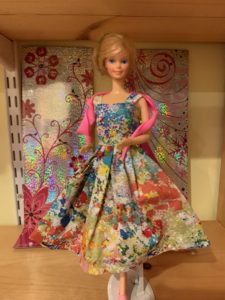 In anticipation of Greta Gerwig’s forthcoming live-action “Barbie” rom-com, which you know I’m going to watch even (or especially) if it’s terrible, “Barbie-core” is the new fashion trend. Or so says the New York Times, which pointed me to these links from Vogue and WhoWhatWear depicting celebs like Kacey Musgraves and Kim Kardashian in campy hot-pink attire. For us masculine folks, the look would be Ken-core. Last week in Provincetown I thought I’d died and gone to button-down shirt heaven. Never had I been surrounded by so many other middle-aged homosexuals in flamboyant leisure wear. I splurged on a Postmarc top with a color palette similar to my Angel Face Barbie’s floral-print dress in the photo above. 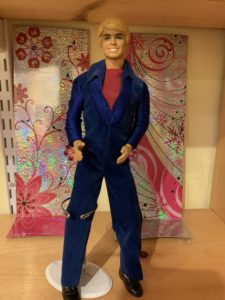 In less enjoyable news about people named Ken, Texas Attorney General Ken Paxton was among the 20-plus Republican state AGs who sued the Biden administration last month to oppose a Department of Agriculture school meal program that prohibits discrimination based on sexual orientation and gender identity. According to NBC News 5 in Dallas-Fort Worth:

The coalition of attorneys general are hoping for a similar result to a separate challenge from earlier this month when a Tennessee judge temporarily barred two federal agencies from enforcing directives issued by Biden’s administration that extended protections for LGBTQ people in schools and workplaces.

The judge sided with the attorneys general, ruling that the directives infringed on states’ right to enact laws, such as banning students from participating in sports based on their gender identity or requiring schools and businesses to provide bathrooms and showers to accommodate transgender people.

I forget how I came across this 2021 piece from FilmDaze, “Anti-Queerness and the Pinkification of Allison of ‘The Breakfast Club'”, but it’s a worthwhile read about the familiar movie trope of the makeover into gender-role conformity. Columnist Nia Tucker says of Ally Sheedy’s metamorphosis from Goth rebel to debutante: “She doesn’t even receive any last words, keeping true to her character having the least lines and a lack of personal development. In exchange for her willingness to be made over, she has been given the gift of the male gaze.”

I had the same reaction to the late great Olivia Newton-John’s transformation in the other direction, from Sandra Dee “lousy with virginity” to sexy spandex chick in “Grease”. What kind of love turns a girl into the opposite of who she was when you met her? There’s an important difference, I feel, between a love relationship that gives both partners the security to grow and change, and a romance that eliminates your eccentricities so you can become “desirable” by the other person’s standards.

Femme style is revolutionary in M.A. Scott’s prose-poem “Pink Magic” at the DMQ Review. “Go ahead & relive that prickle of crinoline, subvert it as drag. Pink magic favors a post-Barbie podiatry, acts as road opener to your slut-crone phase.” Put your Ken doll in a dress!

“How choirs can welcome trans singers”, a recent article on ClassicFM by Sophia Alexandra Hall, reports on several professional choirs that are decoupling vocal parts from gender identities. For instance, Jane Ramseyer Miller, director of One Voice Mixed Chorus in Minneapolis-St. Paul, doesn’t assume that sopranos and altos in her LGBTQ ensemble must be women, or tenors and basses men:

“Most of my conversations are really about the health of a voice,” Jane explained. “If someone’s auditioning, and I’m not quite sure of their gender, I will usually ask pronouns, just so that it’s a little orienting for me.

“Sometimes I will ask if they’re on testosterone, because it makes a difference where I’ll place somebody in terms of voice.”

Some of her chorus members told the reporter about upsetting experiences where choir directors tried to make them wear wrong-gender clothing to fit in with the other singers in their section.

“We are singers, and we wear black,” Jane told Classic FM about the dress code for One Voice.

As opposed to how some ensembles gender their outfits, the singers in One Voice can “choose any kind of black outfit that they want – it’s completely up to them”.

On top of the black outfit, the chorus also wear rainbow scarves.

Listen to this choir sing “Where There Is Light in the Soul” on YouTube.

Poet and memoir writer David Kherdian is the author of numerous books about Armenian-Americans and working-class life in the Midwest. His most recent poetry collection is Blackbirds Over Aurora, an account of an Oregon community based on the mystical teachings of G.I. Gurdjieff. He has kindly allowed me to publish one of his newest poems below.

THE FIRST PROBLEM AND THE LAST

I would like to think we end
here to start over again there,
or else continue again from here
where we have landed,
naked, alone, to learn for ourself
what is expected of us here now.
Nothing bedevils me more
than not knowing what’s next.
Can it be that this futile life
is without a sequel,
could anything be worse then ending
without knowing what comes after.

What we want to know above all is:
If death is the answer to life,
what was the question we failed to ask
before it became too late, as it is now,
here / now, always the same conclusion
with nothing said about The After.
How do we approach the end
without knowing either the question
or the answer, and is it enough to say
at the end I lived Fully.