Tout comprendre, c’est tout pardonner. The French proverb sums up the conventional story arc of healing and closure, encountered repeatedly in inspirational articles and literary novels that take on the difficult subject of abuse. The survivors in these stories are depicted as stuck in pain and anger from the past until they discover their perpetrator’s own trauma history and learn to empathize with her.

Victimized and vulnerable, we long for a God’s-eye view that reveals our senseless trauma to be only a small piece of a larger, meaningful pattern. How could that person’s emotional responses be so unlike mine? Where did her empathy wiring become unplugged? When she saw me as deserving of torment, who was she really seeing?

That’s why we seize on the fact, or speculate where no facts are available, that “the abuser was abused herself”. Traumatically bonded to the parent, and striving to contextualize positive memories of feeling cared for, the adult survivor imaginatively identifies with the “real” person inside her perpetrator, pictured as a wounded child like herself. This kicks the blame upstairs, to the parent’s parent or the creepy guy in the bushes, preserving the fantasy that but for some very bad luck, the abusive parent would have been the loving person that she really wanted to be.

However, this strategy impedes awareness that the abuser and the victim are not the same person, repeating the confusion of the original trauma. As Jungian analyst Sylvia Brinton Perera described in The Scapegoat Complex, an unhealthy parent will split off the rejected parts of her psyche and convince her child that those bad feelings and actions are really his. The incest survivor feels the shame that actually belongs to the perpetrator, and unfortunately, society (including mental health professionals) easily falls prey to the same error.

When I think of the part of me that is merged with my mother, the paranormal bond she always insisted we had, the images that come to mind are hidden damage and family curse. I hear Johnny Cash singing “I See a Darkness” (Many times we’ve shared our thoughts/But did you ever, ever notice/The kind of thoughts I got?) and “The Beast in Me” (who In the twinkling of an eye/Might have to be restrained).

The incest survivor who blogs at Speaking While the World Sleeps wrote a characteristically hard-hitting post in December 2013, about how “abusers as victims” makes survivors afraid of ourselves and stigmatized in society:

It’s a nice, simple explanation that makes people feel better about abuse. Clearly abuse is just self-contained. I’m also sure that it makes non-survivors feel better about themselves – certainly they would never abuse because they’re not like those tragic people.

What this does is assume that there is something in being a survivor that could turn us into abusers. That there is something inherently in us now that we have to fight against to not be abusive and those poor abusive dears who just weren’t strong enough gave into the darkness inside of them. It turns us survivors into ticking time bombs not to be trusted because at any minute there’s the chance that we could “turn.”…

…It flattens the lives of survivors because it reduces us to an “abuse narrative” rather than seeing us as people with unique stories and experiences. It says that everything we do is in relation to the abuse, and that our abusers actions are only in relation to their abuse. We have no lives, no experiences, no other events or circumstances that contribute to our lives. We are not human beings with choices, all our decisions instead revolve around are reactions to the abuse. It turns abusers into unthinking animals who are only able to respond on a base, emotional level, with no conscious thought at all. It assumes that abusers just “don’t know better.” It plays into my mother’s belief of the “whoops, accidentally sexually abused you!”

I think the simplicity of this reasoning allows for us to believe that abuse is self-contained, is separate from the “normal” people. It’s a line of behavior passed down from parent to child, and I feel like it allows non-survivors to believe that they are untainted by its stain – they hold no responsibility for it and they are safe from it.

For me, nobody has more credibility on this issue than Alice Miller. In my favorite book of hers, Banished Knowledge, she expounds on her core belief that abusive parents are indeed re-enacting some childhood trauma. Yet she is unique in her firm insistence that this fact creates no obligation for the survivor to feel any particular way — no compulsory forgiveness, no necessary sympathy, no minimizing or moral equivalence. We’ve spent more than enough time caretaking such parents. We had to empathize with them at our expense in order to survive. It’s our own inner child’s story that is awaiting a long-overdue hearing.

Just once I’d like to read a novel where a survivor decides to disengage from his family story. Instead of imaginatively bonding with his abuser through their common wounds, he accepts that their bond was never genuine or mutual, and learns to grieve this loss while reclaiming his future.

I guess I’ll have to write it myself.

Quentin Crisp. Queen Elizabeth I. And me.

Last week I joined the ranks of fabulous faux redheads, thanks to Robin LaFleur at Hair Etc. in Northampton. 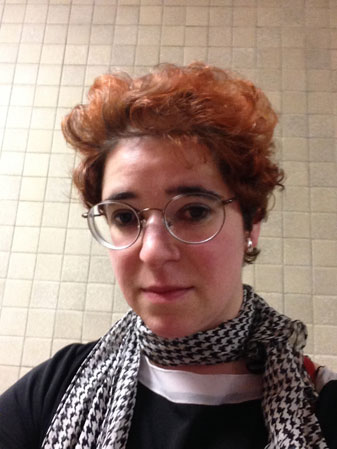 I’ve always been entranced by red hair. From second grade through freshman year in high school, I had a ridiculous crush on a boy several grades ahead of me, about whom I knew hardly anything, except that he had a lion-esque mane of coppery curls. Before that, when I was four, I wanted to marry my grandmother’s marmalade cat (who turned out to be female).

So I figured, a little peroxide wouldn’t hurt my brain function in any noticeable way. 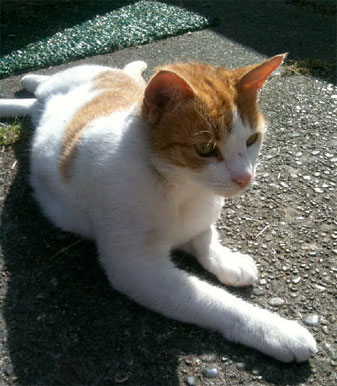 (Google Images approximation of Sidney the cat. I should only look so good. Source here.)

The two-hour process began with application of the “head condom”, a very tight rubber cap to protect my underlying natural color while highlights were applied to selected strands of hair. Said strands were picked up off my scalp, with a device resembling an awl, to make them protrude through holes in the cap, like so: 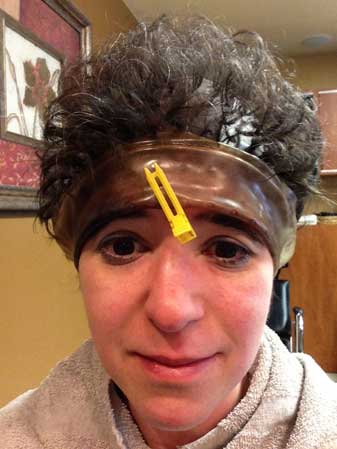 Can you hear my eyebrows squeaking?

Next, Robin painted peroxide on the top strands to lift off the dark color, then encased them in a baggie to bake under the dryer. 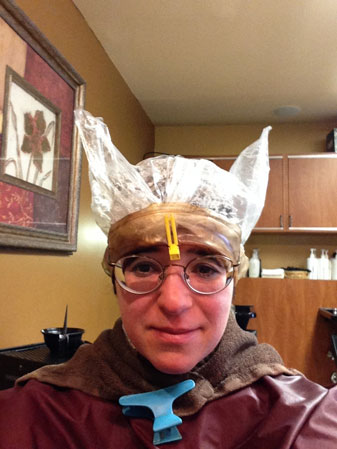 The production budget for “Ride of the Valkyries” was low this year. 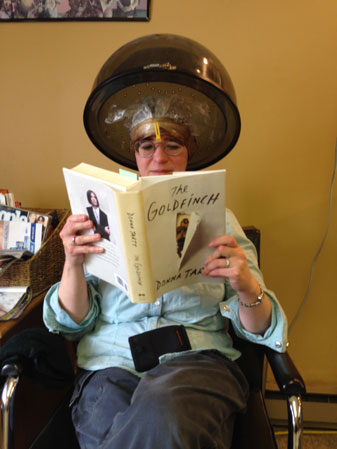 Reading “The Goldfinch” at the salon like the aesthete I am.

Just when I was realizing why I don’t perform femininity more often, Robin turned off the Shake-n-Bake. This is what I look like as a blonde: 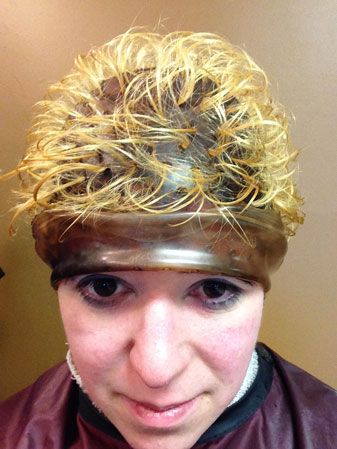 Dr. Frankenstein, we have a problem with the electricity.

My head was repainted with the red dye and left to soak for 25 minutes en plein air, followed by a refreshing shampoo. I went home to terrify my family with my new fashion personality. 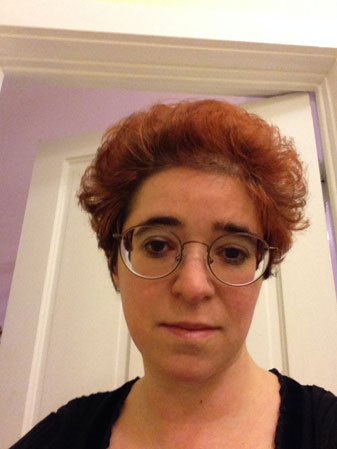 We all remember those moments when a work of art opened our eyes and ears. Those “I didn’t know you could do that!” moments fill us with an uncontainable, restless excitement to respond in some way with a creative outpouring of our own, only we don’t yet have the words to express what we’ve encountered.

I felt that way when I first heard The Beatles’ “Maxwell’s Silver Hammer” on my mother’s record player in the late 1970s. It was wicked, enigmatic, mesmerizing — a taste of adulthood’s forbidden knowledge. Since I still don’t understand the lyrics, it holds much of the same magic for me today.

My mother was a snob about popular music, for the most part. The Beatles were the only rock ‘n’ roll group she would tolerate among her LPs of Tchaikovsky and Broadway musicals. This made me a social outcast in middle school until I acquired my own portable radio in 1983, on which I listened secretly to Prince singing “Raspberry Beret”. Perhaps that’s why it took me until last year to figure out that “Octopus’s Garden” was a metaphor for the female anatomy.

This week, fans commemorate the 50th anniversary of The Beatles’ American TV debut on the Ed Sullivan show. That makes me feel old, but this song makes me feel like a rebellious teenager all over again.