I first encountered Reena Ribalow’s accomplished poetry when she won the 2008 prize for traditional verse at Winning Writers. Born in New York City, she makes her home in Israel, and her work is strongly influenced by Jewish tradition. Her first full-length book, The Smoke of Dreams, was published last year by Neopoiesis Press. This stately, melancholy collection of poems is steeped in sensual memories of bittersweet love, be it for a holy city or a forbidden affair. Her roots are planted in Jerusalem, sacred and war-torn, harsh and captivating. Her more personal poems show the same mix of pleasure and pain in romantic relationships. One way or another, history is inescapable. Reena has kindly permitted me to reprint a poem from The Smoke of Dreams here.

Was it Cezanne who said, “God is light,”
and went South to paint?
Or was it someone else who did not know
that we can take only so much light,
without going crazy?
The slant of afternoon in a dim room,
the dazzle after a passing cloud,
a radiance through shifting leaves,
is all that we can bear.

Here people are mad with light,
their nerves raw with it,
their eyes irradiated;
they cannot see right.
Shadows disappear from streets
without dimension,
with nowhere to hide.
Light hunts us down,
relentless as the Law.

Some plants survive, some thrive,
some play dead by noon light,
wakening to moist life
in the seducing dark.

The light of Europe hints,
suggesting immanence.
Civility infuses light:
the safety of umbrellas, of cloudy parks,
of rooms that hold their breath,
gilded with motes of gold;
this is easy, this wears well.

The prophets were born to desert light,
crazed with it, dooming us
to a surfeit of holiness.

We endure, odd growths
on a sun-battered land.
Saints, madmen, artists
offer their strange and mutant fruit.
Eat of it, they plead,
and know in every cell
the terrible truth:
that God is everywhere.

The Novel will be making the rounds of two dozen book review and M/M fan blogs this spring, thanks to Embrace the Rainbow, a blog book tour site specializing in LGBTQ authors. Hat tip to A.M. Leibowitz for the recommendation. To coincide with the tour, the Amazon Kindle and iBooks editions of Two Natures will be on sale for $0.99 from February 20-March 17.

My guest posts will cover topics such as fashion inspirations for Two Natures and how to avoid distractions from writing. Hope you’ll join us!

Welcome to Bizarro America. I hope you’re reading this blog in your downtime between calling your elected officials to oppose the Muslim travel ban, the Affordable Care Act repeal, all the cabinet nominees, etc., etc. Check out the website 5Calls to find phone numbers and scripts for the latest issues. Western Massachusetts friends, sign up for 413StayingConnected. My mom Roberta went to the Women’s March in DC last month, and we took the Young Master to the one in Northampton. Keep up the resistance.

With my usual impeccable sense of timing, I’ve chosen to come out as a nonbinary Episco-pagan during the most repressive regime in my lifetime. Oh well. I can only hope that I’m obscure enough to remain at the bottom of the watchlist. Good thing poetry books don’t sell. In all seriousness, I hate having to second-guess myself before I experiment with male clothing, but I’ve never been able to hide who I am, even when I wanted to.

This segues into our first link, “Gender Selfie-Determination”, a compelling lecture and slideshow by Alok Vaid-Menon at the Annenberg Space for Photography. I found this one via Lee Wind’s blog review site for LGBTQ teen books and media. Vaid-Menon is an Indian-American nonbinary transfeminine writer and performance artist. In this 85-minute presentation, they challenge the concept of “visibility” as liberating in and of itself. Photos of trans* and gender-nonconforming people, even in well-meant “awareness” campaigns, can just as easily contribute to fetishizing them as to representing their subjectivity. Vaid-Menon asks, what happens when the shoot is over, and they have to run the gauntlet of transphobic attacks in public places just to get home from the studio? A person who presents as neither male nor female is never not visible. When you see harassment, instead of reassuring them “You’re beautiful” (something that would clearly be sexist if said to a cis-female victim), ask “How can I help?” and then do it. During this sharply funny and eye-opening presentation, Vaid-Menon also deconstructs comments left on their Instagram selfies, and reads powerful original poems.

One thing I got out of this lecture is that I don’t have to convince anyone with my gender presentation. I’m not being nonbinary for them. Bowtie and big boobs? “No one will believe me,” the voice in my head whispers. Vaid-Menon talks about fighting off the assumption that they’re trying and failing to pass for one gender or the other. Beyond offering “visibility” to others, cisgender and cis-passing people need to rethink the power relations involved in taking, posing for, and viewing photos. In a January 12 Facebook post, Vaid-Menon wrote:

they want our appearance, but they do not want our knowledge.

& it hurts so bad because it shows that trans people are only regarded for what we look like & not our intelligence. people want to stage the aesthetics of diversity (look so many pretty genders!!) but they don’t want to regard the knowledge systems we are sharing…

This next link is another variation on the theme that appearances are…not deceptive, exactly, but more complex than you’d think. Apparently an elderly woman had been praying to her St. Anthony statue for years before she discovered that it was actually a figurine of Elrond, the elf king from The Lord of the Rings. Amid the Internet mockery, Patheos Pagan blogger Hearth Witch Down Under asked the provocative question, “Why Not Pray to a Toy?”

When you buy a statue or figurine of a deity or other figure such as a saint, you generally don’t buy it thinking it is a literal embodiment of that deity – it’s merely a representation.  For some traditions a statue, figurine or piece of artwork is purely symbolic, it helps you focus your thoughts, prayers or praise – you aren’t aiming these at the image or icon, you are aiming through the image or icon to the true recipient.  The icon is like a conduit, not an actual being.In other traditions the belief is that when you do pray to a deity, the deity may come to you and embody the statue you have dedicated to Them.  It’s a temporary abode for the deity while They visit you.  But the statue is still not actually Them, it is just a place for Them and again, a representation of Them…

…Since we generally don’t see these icons as being the deities we pray to, then I have to wonder why it matters who the icon is based on originally.  So the person (or more likely machine) that created the Elrond figurine had the intention of creating Elrond.  But the woman praying to it was not praying to Elrond – that figurine, in her hands, in her mind, in her heart was not Elrond.  It was Saint Anthony.  It was so much him that when she prayed using that figurine it would have focused her mind to connect with Anthony – she surely wasn’t going to connect with the spirit of Elrond.It doesn’t matter what the icon or image looks like – what matters is how it connects and focuses you.  Many people pray without icons and images, without figurines and statues, without symbols to focus their intent.  If you can pray to a deity without using any symbolism at all, and you can connect to that deity – then I think it’s pretty obvious that what matters in prayer is your aim.  If your aim, your intention, is what connects you with deity in prayer and ritual, then how other people perceive your statue is hardly going to matter.

From my initial explorations of modern paganism, it seems there’s a healthy acceptance of diverse views about whether our magical tools, rituals, and deity representations are inherently powerful, or gain meaning primarily from our intentions. Compare this to Christians’ historically bloody disagreement over whether the Eucharist is the “real presence” or the “symbolic remembrance” of Jesus. I tend to approach magic spell books the way I do cookbooks, that is, haphazardly. Using the right color candle is less important than finding one that will stay lit! Maybe I’m lazy, or not completely bought in to this pagan thing, but I think I’m really just too postmodern to take any religious forms literally. They’re all human-made, culture-bound, imperfect vehicles for contacting the Beyond.

But then again, Barbie is one of my spiritual guides, so Elrond is not much of a stretch… 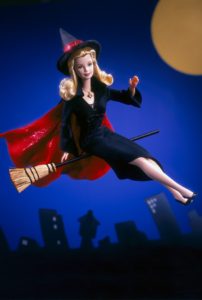 Save
Cultural appropriation from Christianity may be a silly thing to worry about, since it is the dominant religion in America and not the heritage of an oppressed minority. Yet I still have qualms about my post-Christian workaround for enjoying church. The way I tell it to myself, in my youth I recognized the sacred energy in Christian rituals, art, music, and buildings, but felt it would be dishonest to participate when I didn’t believe the words I was singing or saying. Then I was able to convince myself of enough doctrine to take part with a clean conscience…and then I wasn’t. Now I believe that we’re allowed to greet the sacred wherever we find it, and that it isn’t the exclusive property of one religious system.

But how respectful is this, really? Am I misappropriating the church experience by redefining it in terms that its adherents wouldn’t recognize? I’m avoiding the ultimate liberal power-play where I claim that the parts I like about Christianity are the truest or highest essence thereof. Is that good enough?

At his long-running feminist blog Amptoons, Richard Jeffrey Newman recently linked to a New Yorker piece by Rozina Ali about the erasure of the Islamic roots of Rumi’s poetry. The most popular translations, by Coleman Barks, have recast Rumi as a generic mystic, easy to quote in any number of New Age or secular contexts. Newman notes:

Ali begins her article by talking about the famous people—Coldplay’s Chris Martin, Madonna, Tilda Swinton—who claim their lives have been transformed by Rumi’s work. Multiply their number by the many tens, if not hundreds of thousands for whom Rumi has come to represent an, if not the essence of spiritual enlightenment—a mystic whose teachings welcome all people, of whichever persuasion, onto the path towards God, or whatever it is they call the ultimate Truth they are trying to reach—and you end up with an inordinately large number of people who do not understand that the openness they so value in Rumi was made possible for him by, would not have existed for him without, Islam. More to the point, and adding insult to injury, given the demonization of Islam that is so pervasive in our society right now, people could be forgiven for thinking that the teachings of this English-language Rumi are diametrically opposed to the teachings of Islam, rather than being a significant thread within them.

Politically, my à la carte Christianity doesn’t have such dire implications, but I suppose what it all comes down to is boundaries. Is anyone harmed when I re-pagan-ize Christmas in my own mind? I’m a strong believer in not taking something that isn’t offered, and it seems that the Christian experience is offered on certain terms–submitting to the spiritual authority of Jesus, for one thing. When I extract a spiritual encounter from its relational context in the Body of Christ (the church now and in history), am I committing an offense against Jesus, other Christians, or no one at all? The jury is still out.