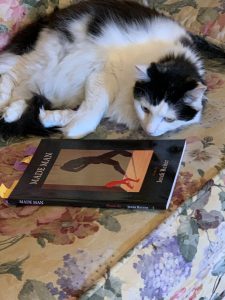 A highly eventful year on the Block!

Made My Bones: My third full-length poetry collection, Made Man, was published in March by Little Red Tree, with cover and interior artwork by friend-of-the-Block Tom W. Taylor a/k/a The Poet Spiel. Solstice Lit Mag calls it “a comitragic, day-glo accented, culture-hopping, snort-inducing, gender-interrogating rollercoaster of a ride.” The American Library Association’s Rainbow Round Table says, “A mix of somber moments and charming wit, Reiter’s collection makes space for humor in the maelstrom of navigating gendered experiences.” Made Man was included in Q Spirit’s list of Top LGBTQ Christian Books for 2022 and was the subject of an essay on later-in-life transition by J Brooke at Electric Literature.

Persia Marie says, “The cover feels nice to rub my whiskers against.” 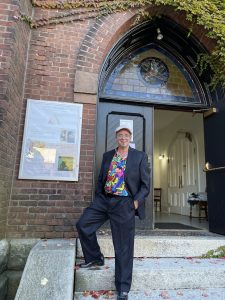 Reading from Made Man at the Brattleboro Literary Festival. Shirt by RSVLTS; suit by Hart Schaffner & Marx; body by Valley Medical Group Endocrinology.

Big Pussy: I turned my home office into a cat AirBnB for my friends’ fur babies when they go on vacation. The shy and regal Persia Marie is the child of artist and writer Jane Morrison. Check out her website for sublime Greek landscapes, caricatures, portraits and more. Ginger rascals Lorca and Rilke belong to author Michael Bondhus and poet/photographer Kevin Hinkle. If you have a reasonably well-behaved cat that you are willing to deliver and pick up in Northampton, get in touch with Uncle Jendi! 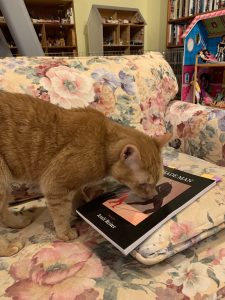 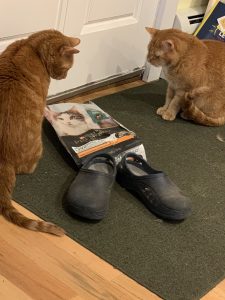 Ginny Sack Is Having a 90-Pound Mole Taken Off Her Ass: The impossible has become possible. In March I had a consultation for top surgery. My surgery date is March 23, 2023. As soon as I can lift my arms again, expect this blog to show way too many pictures of my pepperoni nipples.

My Crew: I celebrated my 50th birthday this July by meeting a dear friend in person for the first time. Friend-of-the-Block Richard Jackson, a/k/a the poet “Conway” from my Prison Letters series, visited us with his loving partner Vanity. We were devastated to learn that Van passed away in a motorcycle accident over Thanksgiving weekend. 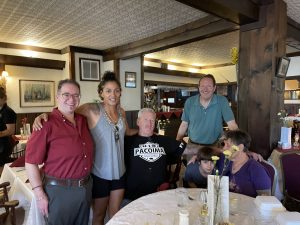 Nostradamus and Notre Dame: I graduated from Year One of the Temple of Witchcraft Mystery School. Year Two began this past September. My spellcraft is going a lot better, now that I figured out that I was trying to light the incense holder disk instead of the cone.

Waste Management: Why throw anything out when you can glue it together? I made a lot of collage greeting cards this year. 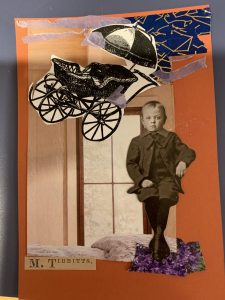 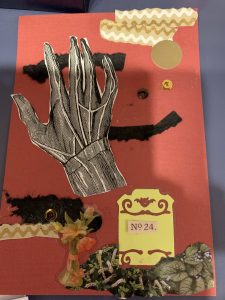 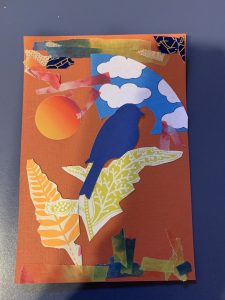 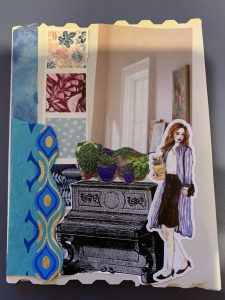 John Ollom and I will be teaching a multimedia workshop at TransHealth Northampton on May 7. We’ll use collage, bodywork, improvised movement, and journaling to guide participants on a journey of gender self-discovery.

You Know Who Had an Arc? Noah: An embarrassment of riches for best books of the year, as I read three novels that would have been #1 on my list, not just for the year, but in general.

Tara Isabella Burton’s sapphic boarding-school novel The World Cannot Give shows idealistic teens getting their crushes all mixed up with their yearnings for transcendence. The author understands, and eventually the protagonist does too, that sincere passions with life-and-death stakes can coexist with a highly performative, aestheticized selfhood. In other words, you might say it’s a Catholic (or Anglican) book, as well as a very queer one, in that ritual and artifice are the container for authenticity rather than its opposite.

Ray Nayler’s The Mountain in the Sea is a hard-science thriller set in a reshaped geopolitical environment, where humankind’s aggressive harvesting of the oceans for protein may have put evolutionary pressure on octopuses to develop a civilization of comparable intelligence as ours. On a deeper level, it’s a dramatization of different philosophies of consciousness, in which the impossibility of truly seeing through another’s eyes becomes an invitation to rekindle empathy and wonder.

GennaRose Nethercott’s Thistlefoot imagines what would happen if Baba Yaga, the witch of Eastern European folklore (and patron saint of this blog), had American Jewish descendants who inherited her chicken-legged hut. The Yaga siblings–a puppeteer with the power to bring objects to life, and a street performer and thief who can uncannily imitate anyone he meets–find themselves charged with the task of laying the ghosts of the pogroms to rest. Don’t miss the chance to see Nethercott perform a puppet show dramatizing sections from her book. Join her mailing list to find out tour dates. 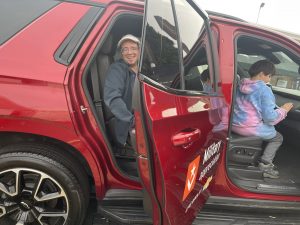 Bro time with Shane at the Big E!

Winning Writers subscriber Duane L. Herrmann emailed me with his latest poetry publications news for our newsletter, and we got to chatting about his Kansas farm and the chores he’s doing to prepare it for wintertime. When he used the phrase “enlarging the meadow,” I suggested it would be a good poem title. Now, here is the poem! Check out more of his work in the anthology Atelier of Healing and the online journals Soul-Lit and I Write Her, among many other venues. His eighth collection, Zephyrs of the Heart, was published this year by Cyberwit.

Low bushes invade,
creep into grass,
then additional forbs,
generally called “brush,”
quickly follow.
Their broad leaves,
larger than grass,
encourage tree seeds
to root and sprout,
all causing the edge
of the meadow to move.
After decades it
becomes forest.
To restore supremacy
of grass
all woody plants
must go–back breaking
under hot sun.

In my misspent youth, Princess Diana epitomized fairy-tale feminine perfection. I still have my Charles and Di royal wedding paper dolls. Now, watching Season 5 of “The Crown,” I see the people’s princess as a role model of a different kind, the family member who breaks the code of silence about emotional abuse and neglect. The rules of the system let you get away with almost anything as long as you agree to maintain the façade. Honestly, the Windsors are just the Sopranos with posh accents.

Elizabeth Debicki is doing a great job as 1990s Diana, though the tall actress towers over her co-stars in a way that I don’t remember the real Diana doing. She has the mannerisms spot-on and she can show the princess’s immaturity and self-involvement without making us lose sympathy for her untenable position in the royal family. I wondered why they recast the role, since Emma Corrin was also perfect in Season 4.

Many factors go into casting decisions, of course, but something clicked when I discovered that Corrin recently came out as nonbinary. Maybe the ultra-feminine Diana was too dysphoric a role for them after that. I mean, this Mary Sue article from August 2021 shows them wearing a chest binder! This summer, they became Vogue’s first nonbinary cover model. This BBC article from November quotes them as advocating for an end to gendered categories at film and TV awards shows, following the lead of the Grammys: “It’s difficult for me at the moment trying to justify in my head being non-binary and being nominated in female categories.”

I don’t know about you, but I’m going to be Googling “Emma Corrin top surgery” all through 2023.

Over the last few years, multiple GOP-controlled state legislatures have advanced bills that would strip access for children and teens to undergo a gender transition. These pieces of legislation have largely been framed by their sponsors as efforts to protect children from “groomers,” pedophiles and doctors intent on doing irreversible harm to their bodies. Though the bills are focused on minors, they have also created fear and uncertainty among trans adults about whether their care, too, could soon be threatened, since many of the sponsors have rejected the idea that people’s gender identity can be anything other than the sex assigned at birth.

Arkansas, Arizona and Alabama have passed laws limiting or outright banning gender-affirming care for minors, while states including Texas and Florida are using executive actions to pursue similar goals. The Arkansas, Texas and Alabama measures have been blocked or partly blocked in court while legal battles continue. Advocates have also vowed to challenge Arizona’s less sweeping law.

Tennessee has a much narrower state law, enacted in 2021, which bars hormonal treatment for “prepubertal minors.” But since young children generally don’t receive that care, experts said, it doesn’t actually have an impact — although some lawmakers have pushed for more comprehensive legislation blocking gender-affirming care…

At least 15 other state legislatures are considering proposals for similar restrictions. At the federal level, Rep. Marjorie Taylor Greene (R-Ga.) has introduced the “Protect Children’s Innocence Act” which would ban federal funding for health plans that cover gender-affirming treatment, prohibit U.S. academia from training doctors in how to provide such care and make it a felony for a doctor to give such care to a minor. It has 49 co-sponsors. It has not yet been heard in the House, but that could change as Republicans take control in that chamber next year.

Scaremongering in mainstream media (I’m looking at you, New York Times and The Atlantic) gives the public an inaccurate and overblown idea of the interventions most trans youth actually receive. Doctors interviewed by Politico noted that any kind of gender-affirming surgery is rare for patients under 18, and the most common treatment, puberty blockers, is reversible.

This haunting piece at the flash prose journal fractured lit depicts a different kind of gendered silencing. Tonally reminiscent of Carmen Maria Machado’s feminist horror tales, Grace Elliot’s “In the Closet” is told from the point of view of a mother seeking a private place to scream.

At Narrative Magazine, Emma Brankin’s hard-hitting story “The Red Dress” limns the thought processes of the daughter of a fictionalized Harvey Weinstein figure, as she goes from defending him to recognizing the truth. It’s an excellent dramatization of the selectiveness of memory, not to mention the interpretations we put on it. (You have to create a free account to read this story.)

Perhaps the cephalopods have a creative solution to our domestic woes? CB Anderson’s whimsical essay “On Octopus Sex and the Moon” captures the surreal feeling of late-night web surfing during COVID quarantine.

You link to a science site that confirms one of the male’s arms is like a penis. Called a hectocotylus, it’s capable of erections. Reddit was on the level here.

You learn the hectocotylus can deliver sperm from a distance, which evolved because females tend to kill and eat their partners. One octopus species even has a hectocotylus that functions as a detachable penis, swimming to the female on its own.

Ruminate, a journal of spirituality and literature, sadly closed up shop this autumn. On their website, the speaker in Sarah Damoff’s gorgeous flash fiction “The Naming” juxtaposes thoughts on Adam naming the beasts in Genesis with fragmented memories of a violation that she can’t bring herself to name until the perpetrator is long dead.

Another innovative and darkly funny fiction piece comes to us from DIAGRAM issue 22.5. Channeling the corporate dystopias of George Saunders, James Braun’s “Let Us Have This” depicts absurd and disturbing events at a superstore. The deadpan second-person plural voice, like a Greek chorus, describes a place where workers’ identities become subsumed into (or consumed by) the heart of the Hart-Mart: “we will always be here, even when we are not.”

I was stunned by this graphic memoir in Split Lip Mag by Coyote Shook. “The Young Harris Psalter” reconstructs memories and legends of a forbidding, fascinating great-grandmother who was a rural faith-healer in the Blue Ridge Mountains and died of “brain problems”. After public health clinics came to the region in the 1980s, Shook writes, “She retired unceremoniously and turned her attention to the autoharp, collecting terrifying oddities, and bemoaning the bitterness of her life to anyone who would sit still for it.” A plot worthy of Edward Gorey.

You’re read this far, you can have a little gabagool, as a treat: Saturday Night Live’s “Don Pauly” sketch imagines what would happen if the Jersey mob got “woke”. It’s a scream.