Award-winning poet Judith Goldhaber and her husband, the artist and physicist Gerson Goldhaber, have just released a sequel to their well-received collaboration, the illustrated poetry book Sonnets from Aesop. Their new collection, Sarah Laughed: Sonnets from Genesis, embellishes familiar Bible stories with humorous and mystical elements from midrash and folklore. Willis Barnstone writes, “Sarah Laughed is utterly charming, poem and icon…In the best tradition of imitation it illumines the Abrahamic religions.” The Goldhabers have kindly permitted me to reproduce the following excerpt from their “Noah and the Flood” sonnet sequence:

ii. The Time is Coming

God spoke to Noah when he became a man
and said, “The time is coming — build an Ark;
storm clouds are gathering; soon you will embark
upon the seas, as outlined in My plan.
Make the Ark as sturdy as you can —
line it with pitch, strip gopher trees of bark
to shape the hull, and lest it be too dark
cut windows, and a doorway.” Noah began
to do what God commanded, but worked slowly,
hoping in time the Lord might change His mind
regarding the destruction of mankind.
He begged the wicked to return to holy
customs, but they answered him with jeers.
And thus went by one hundred twenty years. 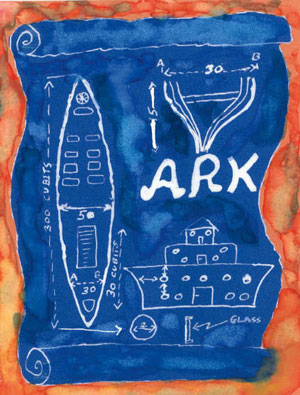 At last the Ark was finished, and it stood
three hundred cubits long, and fifty wide,
three stories — thirty cubits — high inside
constructed out of seasoned gopher wood,
the laughing stock of Noah’s neighborhood.
“A flood?” the people mocked, “I’m terrified!
Look! Over there! Is that a rising tide
I see? Boo-hoo, I promise to be good!!”
But then Methuselah died, and a malaise
descended on the people, for they knew
that God had stayed His hand until the few
good men still living reached their final days.
A dark cloud veiled the sun; the sky was bleak,
and Noah sniffed the wind and said, “A week.” 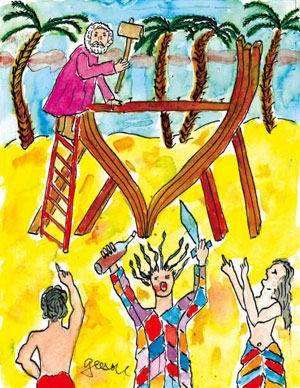 Compared to getting humankind to heed
the urgent warnings, putting out the word
to animals was easy. Bird to bird
the news was spread at supersonic speed.
By nightfall all the beasts of earth had heard
the message, and they readily agreed
to group themselves according to their breed
(scaly, hairy, hard-shelled, feathered, furred)
and line up in a queue beside the Ark.
Birds sang and cattle mooed and lions roared
as Noah gently welcomed them aboard
and sealed the door against the growing dark.
At last, on bended knee, nose to the ground,
he gathered up the ants, lest they be drowned. 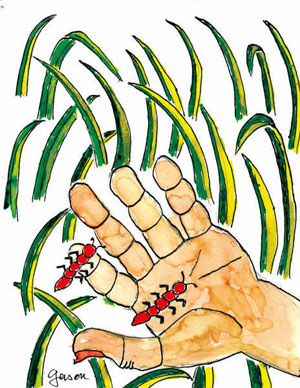 The sun turned black, and lightning streaked the sky,
somewhere behind the clouds a strange light bloomed
and faded, and at last the thunder boomed,
bringing the first drops. Then a mighty cry
arose from those who’d chosen to defy
the warning signs, and callously resumed
their sinful ways. “Even now you are not doomed,”
despairing, Noah cried, “repent or die!”
On board the Ark, through unbelieving eyes
the animals beheld the death of man.
Sworn adversaries since the world began
wept freely as they said their last goodbyes.
Even man’s ancient enemy the snake
shed bitter tears that day for mankind’s sake. 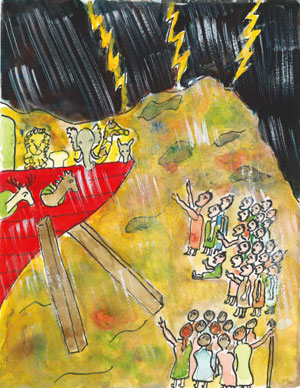 3 comments on “Judith & Gerson Goldhaber: “Noah and the Flood” (excerpt)”