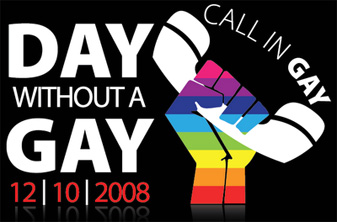 Day Without a Gay is a nationwide strike and economic boycott by the LGBT community and their straight allies, in support of equal marriage rights for all Americans. The strike will take place on Dec. 10, International Human Rights Day. Instead of going to work or shopping on that day, participants are encouraged to volunteer for their local LGBT or human rights organizations. Here’s the information from the email announcement:


WHY? To raise awareness that LGBT workers, business owners, consumers and taxpayers contribute over $700 billion to the American economy. We are lesbian and gay Americans and we deserve the same rights as all other Americans, including the right to get married.

WHERE? All across the United States.

Strike! Call in gay. That means shut down your business, call in sick, take the day off.

Boycott! Don’t buy anything, spend money or support the economy.

Participate! Give back, fight back or help roll back marriage discrimination. Go to www.daywithoutagay.org to volunteer, petition or protest.

WHY THE NAME “A DAY WITHOUT GAYS”? The name was inspired by the film A DAY WITHOUT A MEXICAN and the nationwide strike in 2006 called A DAY WITHOUT IMMIGRANTS that protested against proposed immigration laws.

WHY STRIKE NOW? One day won’t destroy the economy, but it will raise awareness that we are serious about getting our rights. Also, strikes and boycotts are more effective in an economic downturn because business owners have more to lose.

WHY A STRIKE AND A BOYCOTT? These tactics have been successful in the past, from the Montgomery Bus Boycott to the anti-apartheid boycotts. Their actions often came at a great sacrifice but they were willing to risk everything for their rights.

WHAT IF I WILL GET FIRED? In fact, many states still do not have employment non-discrimination laws for gays and lesbians. If you are in fear of getting fired, go to work, but you can participate in the boycott by not consuming. Pack a lunch!

Visit the Day Without a Gay organizing page on the social networking site WetPaint to find volunteering and activism opportunities in your area.