Every day is Pride Day at Reiter’s Block, of course, but this weekend I had the chance to celebrate with nearly 10,000 GLBT folks and straight allies at Northampton Pride. My husband and I marched with friends from our church, St. John’s Episcopal Church in Northampton, and then I tabled for MassEquality. If you haven’t already done so, visit their website and send a message to your Massachusetts legislators to support the transgender non-discrimination bill.

Photos below are by my man Adam Cohen. He went home to do some actual work after the parade, so I don’t have pictures of the stage acts from the afternoon, because carrying around the camera would have interfered with my ability to eat ice cream and buy rainbow-themed jewelry. I particularly enjoyed the performances by poet-songwriter Arjuna Greist, who sang about Jerry Falwell being forgiven by the queer angels in heaven, and the Pioneer Valley Gay Men’s Chorus (the cute young interpreter put a little extra flair into his hand gestures, if I’m not mistaken). Towards the end, our loud and proud emcee Lorelei Erisis reminded us that we were also celebrating on behalf of all the GLBT people in countries where it’s not safe to come out. 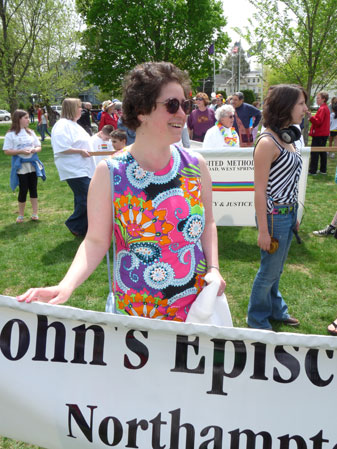 Marchers gather in Lampron Park for the start of the parade. 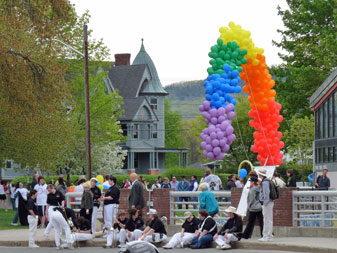 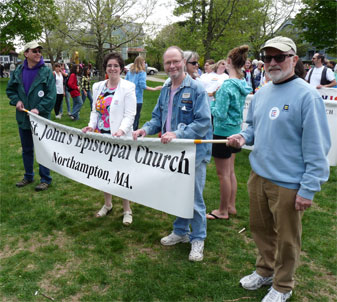 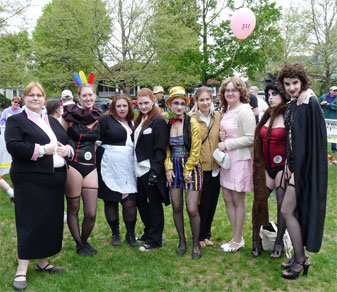 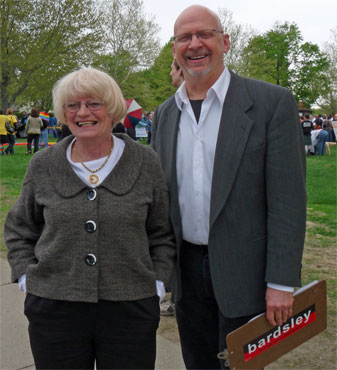 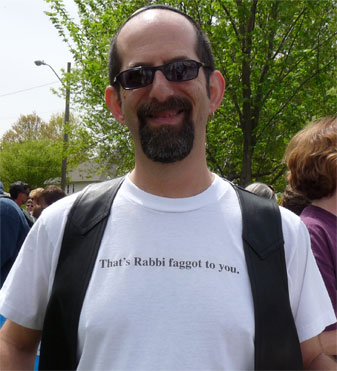 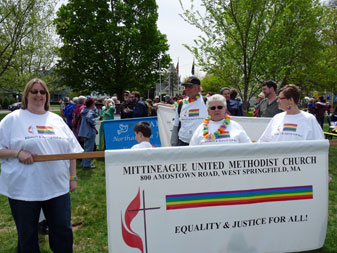 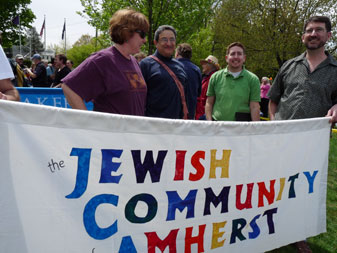 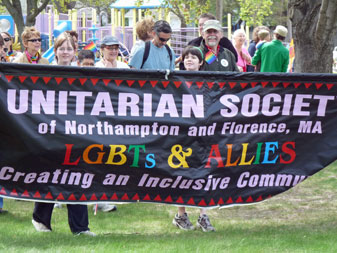 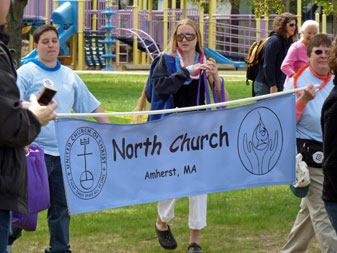 Jack Hornor, the head of our local MassEquality chapter. 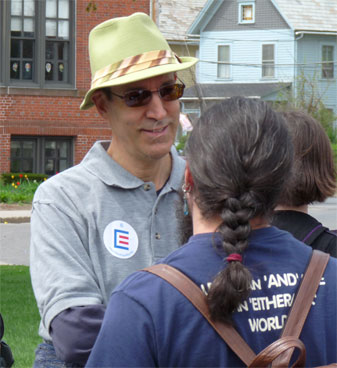 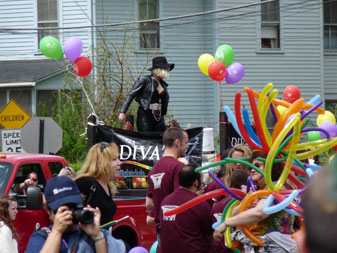 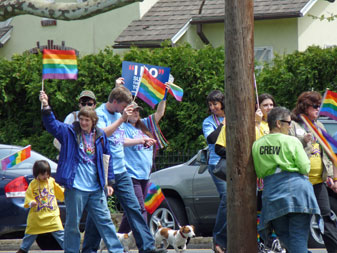 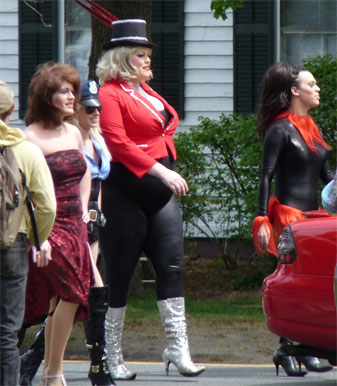 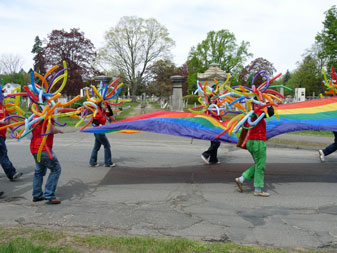 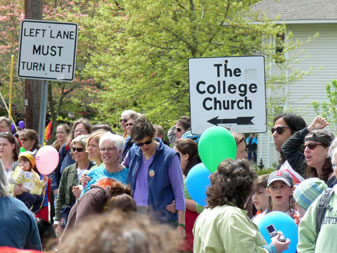 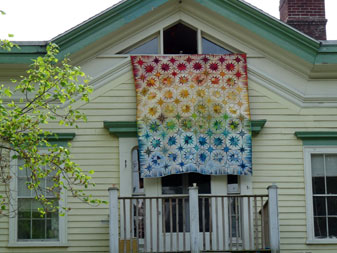 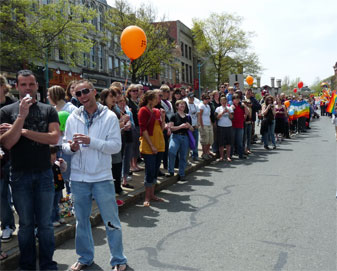 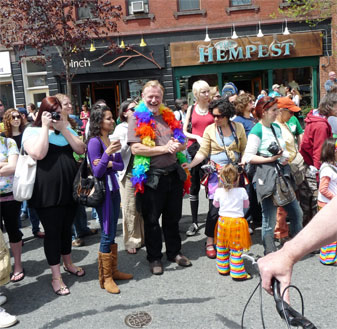 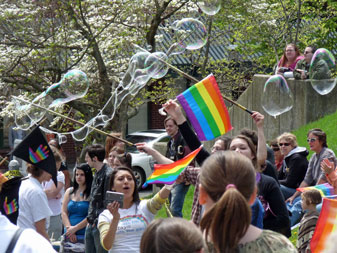 Mike with the Rev. Dr. Andrea Ayvazian from Haydenville Congregational Church. HCC had the largest church-group presence (the Daily Hampshire Gazette said 50 people) and the best T-shirts, which said something like “I love my gay neighbor…straight neighbor…Muslim neighbor…addicted neighbor…” etc. 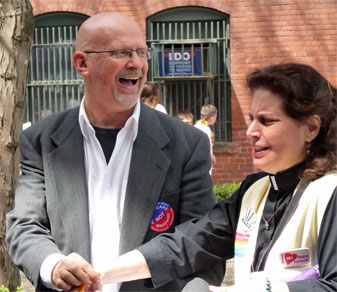 The one and only Lorelei Erisis. 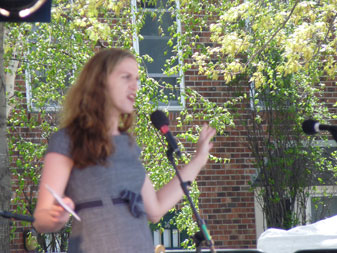 This kid’s picture should be next to “fabulous” in the dictionary. 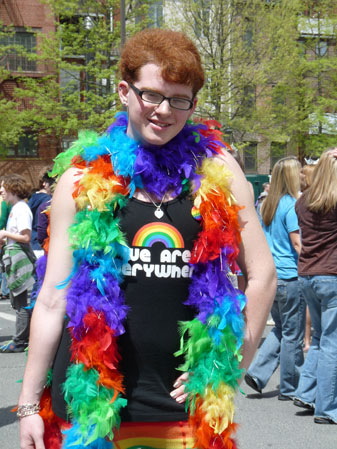