My poetry chapbook Swallow won the 2008 Flip Kelly Poetry Prize from Amsterdam Press and is now available for purchase online. Thanks are due to my awesome editor, Cindy Kelly; poet Ellen LaFleche, who helped me organize the collection and suggested the title; and my prison pen pal “Conway” who drew the amazing cover art. 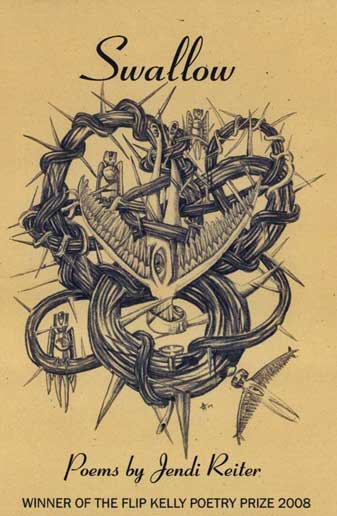 “Jendi Reiter’s poems are arrows that plunge dead center into the hearts of feminism, religion, death, the interior of mental health and psychotherapy. Her humor and satire here are as sharply honed as are her indignation. All are delivered in highly imaginative and metaphoric imagery. This is an intelligent and powerful read that will leave issues bleeding in the minds of readers for a while before they heal.”
—Ellaraine Lockie, award-winning poet, nonfiction author, educator

“There’s plenty of poetry I wouldn’t give a fig for, but I’d give strawberries for the poems in Jendi Reiter’s SWALLOW. When I started in Poetry in 1962, I felt poems were only poems if the top of my head was taken off, to use Emily Dickinson’s words. Jendi Reiter, who is also a bold experimenter, writes that way—solid images, worthwhile themes, and sentences that stick in the mind like raisins in rice pudding. I find much of today’s poetry too arcane, which may be why it’s ignored by so many. That’s not true of Jendi Reiter’s work. It’s challenging, beautiful, and clear. Read it, and again in Dickinson’s words, taste a liquor never brewed.”
—William Childress, Pulitzer-nominated Korean War poet and journalist

Enjoy a sample poem from Swallow:

We’re all trying not to think about sex or cake.
That bitter word hurled from a car.
A moment ago you felt pretty.
Trying not to hammer the nail
into anything but the board.
Hard hat men sucking on coffee,
women with their hands down their throats
like a magician pulling a ten-foot rope out of a bottle.
It seems to go on forever,
monotonous intestine.
We’re trying cold baths and grapefruits,
another route around the tar
someone’s grateful to be laying down.
Saying throw me in the briar patch,
come on, do.
What a great distraction brambles are.
Rubbing and rubbing the saw against the wood.
What wound is he favoring
as his whistle strips you like paint?
We’re smashing pies into our faces,
we’re cutting open our skins. The better to eat.