Last Saturday, Northampton hosted its 30th annual GLBT Pride march. Political diversity and even dissent were noticeable themes this year, in my opinion a good sign that our GLBT community feels safe enough to forgo a united front–and even to prioritize other issues besides their own rights.

What a change from 20 years ago, when, as old-time residents told me, the local paper consistently misprinted the date of Pride, the city put up endless bureaucratic obstacles in the way of them getting a permit, and some closeted gays had to march with bags over their heads. One activist remembered being chased by a schoolbus full of Christians shouting homophobic slurs. It was a welcome relief this year to see numerous faith-based groups–Jewish, Christian, and Muslim–carrying parade banners.

These folks, naturally, were my favorite: 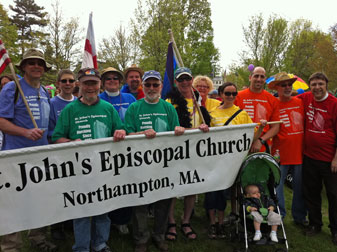 Though the matching T-shirts were tempting, this year our family marched behind our City Council candidate, Arnie Levinson. Arnie stands for transparent government and protecting our natural resources from short-sighted real estate development. He was also active in organizing our Neighborhood Watch after a spate of arson fires that killed two neighbors in 2009. 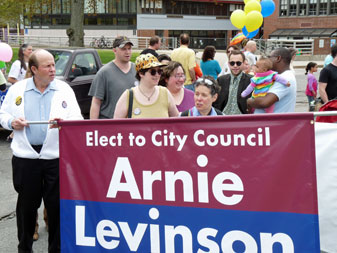 (Left to right: Arnie, Karen’s boyfriend Rich, moi, my stepsister Karen, and my other mom Roberta.)

Uniquely this year, Pride drew some protesters from the Left: Queer Insurgency, spearheaded by transgender elder, activist and archivist Bet Power, sought to return Pride to its radical origins. QI contended that the public face of the gay community had become too commercialized and bourgeois. A narrow focus on inclusion in mainstream institutions like marriage and the military sidelines the issues that are a higher priority for GLBT people on society’s margins, such as employment discrimination, hate crimes, and the intersection of multiple oppressions (e.g. disability and racial inequality). 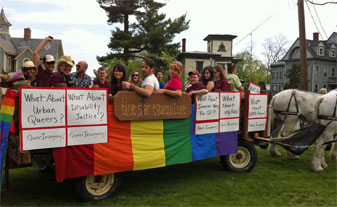 I stopped to compliment this young man on his fabulous jacket, and got an education in the difficult choices that we must make when a regime that seems to support GLBT equality also violates another group’s human rights. 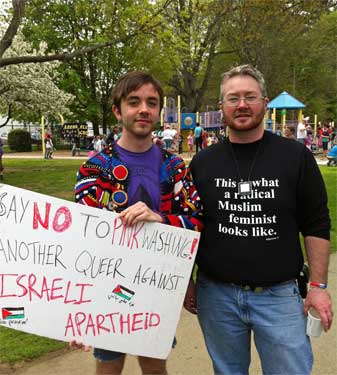 Asked to explain “pinkwashing”, Alex said Israel bills itself as gay-friendly in order to deflect criticism from progressive gays and allies about the country’s mistreatment of the Palestinians.  However, he rejected the false choice between human rights for one group versus another. There are also gay Palestinians and Arabs in Israel who are still oppressed by the regime because of their ethnicity; the GLBT-friendly policies don’t do much for them. Better, he said, to give the Palestinians self-determination and allow them to come up with their own solutions, rather than being dependent on the Israeli government as the only protector of GLBT rights.

As an ethnic Jew who grew up on stories about refugees being turned away from American shores during the Holocaust, I have a knee-jerk emotional reaction to comparisons between Zionism and South African apartheid. Unlike the Dutch and English colonizers, who were already top dog in their home countries and just went to Africa to exploit its riches, Jews in the 1940s had reason to believe they needed a homeland for their tribe because they weren’t safe anywhere else in the so-called civilized world.

But folks like Alex have made me realize I need to be more objective, and get educated about what’s really happening to the Palestinians. Some links he sent me, which I plan to explore, include Palestinian Queers for BDS and Thoughts on Palestine (a Hampshire College study group). (BDS stands for “boycott, divestment, and sanctions”.)

The Palestinian/queer dilemma is an interesting problem of priorities. Currently, the world’s Arab and Muslim regimes are mostly unsafe places for sexual minorities. Would Middle Eastern gays at least temporarily fare worse if there were no Jewish state? Is that a risk worth taking? Whose oppression comes first? (Not that all these anti-pinkwashing groups are calling for Israel’s eradication, but if you argue that Zionism equals racism, the logical next step seems to be that it’s illegitimate for the country to try to maintain a Jewish identity, even if the human rights abuses ceased.)

Around the same time as Noho Pride, the question of competing oppressions was also at the heart of the recent controversy over Sojourners’ refusal to run this ad from Believe Out Loud, a GLBT Christian advocacy group. Sojourners is a well-known progressive Christian organization that reaches across denominational lines to advocate for economic justice and an end to war. The ad, released in conjunction with Mother’s Day, depicts two lesbian moms and their anxious little boy walking slowly down the aisle of a church as parishioners eye them with suspicion, hostility, and curiosity. Just as the tension becomes painful, the minister smiles and says “Welcome … everyone.“

Sojourners founder Jim Wallis defended the move by saying that Sojo supports civil rights for gays, but taking an overt political stand could alienate some members of their constituency, who were not all of one mind about what the Bible says about homosexuality. It’s a question of priorities:

But these debates have not been at the core of our calling, which is much more focused on matters of poverty, racial justice, stewardship of the creation, and the defense of life and peace. These have been our core mission concerns, and we try to unite diverse Christian constituencies around them, while encouraging deep dialogue on other matters which often divide. Essential to our mission is the calling together of broad groups of Christians, who might disagree on issues of sexuality, to still work together on how to reduce poverty, end wars, and mobilize around other issues of social justice.

Given the time Sojourners is now spending on critical issues like the imperative of a moral budget, the urgent need to end the war in Afghanistan, and the leadership we are offering on commitments like immigration reform, we chose not to become involved in the controversy that such a major ad campaign could entail, and the time it could require of us. Instead, we have taken this opportunity to affirm our commitment to civil rights for gay and lesbian people, and to the call of churches to be loving and welcoming to all people, and promote good and healthy dialogue.

Sorry, Jim. I’m not buying it. Watch the ad again. I don’t see anything about “sexuality”. I see a family like mine, being shunned in a house of worship simply because they look different, until the minister reminds the crowd how Christians are supposed to treat one another. It’s basically an anti-bullying message for churches.

Why is it incumbent on progressives to compromise here, in order to include people in our anti-poverty coalition who would be offended by the most minimal acknowledgment that queer families exist? Can we really not accomplish our objectives without them? Better to take a stand and leave those conservatives looking like the mean-spirited ones, because they’d rather stop feeding the hungry than treat lesbian moms with respect.