Integrity USA is the main group that advocates for GLBT inclusiveness in the Episcopal Church. The Western Massachusetts chapter has been holding a series of discussion forums throughout our diocese, to foster dialogue and educate parishes about where we are in the process of creating official blessings for same-sex couples.

At the 2009 General Convention (the most recent policy-setting conclave of the entire national church) the bishops and lay deputies approved a sort of “local option” for dioceses to develop official rites for same-sex couples. Though nothing was mandated, some gesture in that direction was particularly encouraged for dioceses where gay marriage or civil unions are legal (e.g. Massachusetts). Ordination of GLBT candidates was similarly permitted but not required.

The next decision point for Western Mass churches will occur at the annual Diocesan Convention in October. The local chapter of Integrity is sponsoring a resolution that our diocese “initiate a process to develop pastoral and clergy resources that would accompany and support the forthcoming national church SCLM-authorized liturgies for the Blessing of Same-Gender Relationships”. (SCLM is the national church’s Standing Committee on Liturgy and Music.)

However, it’s up to us to make sure this resolution doesn’t die in committee, but is brought to a floor vote. Integrity chapter chairman Steve Symes needs affirming Episcopalians to register as delegates and sign on in support of the resolution. If you live in Western Mass and can attend the convention in Springfield, email him at swsymes@msn.com.

I’d like to share two excerpts from the materials Steve gave us at our workshop at St. John’s last weekend. These are taken from the report of the Task Force on the Blessing of Same-Sex Unions in the Diocese of Western Massachusetts.

The church has rightly been reluctant to discuss marriage, for either straight or gay couples,
using the language of rights such as is employed in legal discourse. Like the discussion of
ordination of women in the 1970s, we have held to the language of vocation. A couple is
“called” to the estate of marriage, and this calling is first heard by the couple. When the blessing
of the Church is desired, this calling is tested by the community, in the representative of the
priest, and then, more broadly, if “banns” are published. The publishing of banns invites the
community to affirm and pray for the couple as they prepare for their vows and also allows the
community to assert concerns if one’s history would indicate that marriage is unadvisable.

In the
view of the Church, Christian marriage is not a right in the sense that civil rights are understood.
Rather, in the Church, marriage is seen as a particular calling, discerned initially by two persons
and then confirmed and supported by the prayers, material and emotional support of the church.
Marriage is understood as one means by which a person pursues a course toward holiness — as
one learns to live together in times of both prosperity and adversity, sickness and health,
harmony and conflict, one has the opportunity to grow more and more into the full stature of
Christ.

We find the deliberation of the marriage or blessing of partners of the same sex tends to devolve
into the contentiousness of the society at large when we forsake the language of the Spirit’s
calling two persons to a holy covenant for the language of two persons demanding their rights in
the church. Such language is foreign both to the scriptures and the tradition of the Church.
Consequently, we have come to an awareness that marriage between two people is a gift from
God bestowed in order to further the mission of the church: to restore us to unity with God and
each other in Christ. Seen in this light, Christian marriage is a powerful and effective “school for
Christian holiness” where unity can overcome estrangement, shame, isolation so pervasive our
culture.
…

On the Care and Nurture of Children:

The rite of Holy Matrimony states as one of the purposes of marriage “the procreation of
children and their nurture in the knowledge and love of the Lord.” The modern social situation
and advances in technologies related to reproduction extend the concept of “procreation” well
beyond the fruit of sexual union between a man and a woman. We have also come to see
families created by adoption and remarriage as more prevalent. We therefore hold that the
nurturing of children in the knowledge and love of the Lord is a calling open to all couples called
to marriage. Furthermore, it is a calling in which the Church has great interest. Not only we
must always preferentially protect the weak and innocent, we desire to support parents in their
challenging calling to raise children, and to help especially in their spiritual nurture and care of
their souls. The Church, through her clergy and trained laity, stands ready to assist all couples
in discerning their call to parenthood, and to support couples as they nurture their children to the
abundant life promised them in Jesus Christ.

Indeed, another straight ally at our St. John’s meeting said she welcomed the same-sex blessings debate as an occasion for the church to rethink and modernize the theology of all marriages. How can Christians reclaim the meaning of marriage from its chauvinistic origins as a transfer of female “property” from father to husband, and also from the crass materialism and sentimentality of contemporary weddings? For personal reasons, I also welcome the notion that a nonprocreative marriage can bear spiritual fruit in other equally valuable ways.

Not to forget the “T” in GLBT, we also discussed the need for strengthening nondiscrimination provisions at the local level. This past May, in response to pressure from Integrity, our diocese added “gender identity and expression” to the protected categories in their human resources manual. However…this only applies to hiring by the diocese itself, and is not binding on individual parishes, which seriously limits the rule’s usefulness.

Similarly, at the parish level, nondiscrimination on the basis of sexual orientation is merely encouraged, not mandated, by the diocese. Integrity argued that Massachusetts civil rights protections for gays and lesbians override this policy, but the diocese does not believe that these laws apply. At least with respect to non-clergy hires, I personally think the state law should control.

Contact Steve to find out how you can help. 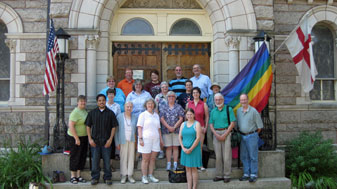 Attendees from the Integrity W. Mass. meeting at St. John’s in Northampton