Greetings, loyal readers! It’s time for our annual roundup of the best books, blogs, and other big events of 2012. As usual, the books listed here are ones I read this year, not all published this year. 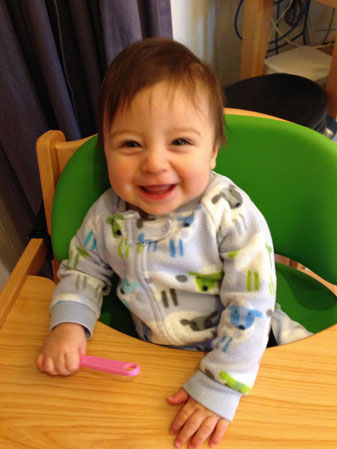 Marc Weissbluth, Healthy Sleep Habits, Happy Child (2005)
Do you know why I have time to write this blog post? Because the Young Master slept 15 hours last night! Dr. ZZZ, as we call him, makes a good case that many behavioral problems seen in infants and young children are really just signs of overtiredness. The doctor tells you how to spot early signs of fatigue in your baby so you can put him down for a nap before he gets too charged up with adrenalin. If the big book is putting you to sleep, Weissbluth’s Your Fussy Baby is a quicker read that covers the same basic principles for infants 0-4 months.

Stephanie Burks & Kelli Bienvenu, While You Were Sleeping (2004)
This picture book makes me cry every time I read it to Shane. A lesbian couple get the phone call that a birthmother has chosen them to adopt her newborn boy. (I do wish the birthmother appeared as a character, but perhaps that would be too complicated for this age group.)

Anna Pignataro, Mama, Will You Hold My Hand? (2010)
A gentle, poetic picture book. Mother Bear reassures her child Sammy that she’ll be there through all their adventures. Similar to The Runaway Bunny but not so triggering.

Nancy White, Detour (2010)
This poetry collection explores the breaking apart and remaking of a woman’s identity in the middle of her life, through a son’s birth and a painful divorce. Subject matter that in a lesser poet’s hands would be merely confessional here takes on a haiku-like precision and open-endedness, intimate yet unbounded by the confines of one person’s experience. This feat is accomplished through White’s use of the second-person voice and the way she narrates major events obliquely, through peripheral details described with quiet beauty. (Full disclosure: Nancy taught English at my high school, though I wasn’t in her class.)

Kathie Giorgio, The Home for Wayward Clocks (2011)
An abused boy becomes a recluse who lavishes all his human warmth on the clocks he rescues and repairs for his museum. But a disabling accident, and the arrival of an abused teenage girl who needs his help, compel him to reach out to his neighbors and learn to trust again. His storyline is interspersed with the stories of the clock-owners. Look for the sequel to this beautiful novel, Learning to Tell (A Life)Time, from Main Street Rag Publishing in 2013.

Bernadette Barton, Pray the Gay Away: The Extraordinary Lives of Bible Belt Gays (2012)
Sociology professor examines how LGBT people in the American South survive the fundamentalist “panopticon”. Thoroughly researched but never dry, the book strikes a good balance between outrage and hope.

Deborah Feldman, Unorthodox: The Scandalous Rejection of My Hasidic Roots (2012)
This gripping memoir recounts a young woman’s escape from her family of Satmar Hasidim, an ultra-Orthodox Jewish sect living in the Brooklyn neighborhod of Williamsburg. Feldman depicts a repressive, patriarchal community where women are deliberately kept uneducated and forced into abusive marriages. One quibble: the final section of the book felt rushed. Follow Deborah on Twitter for a feminist watchdog perspective on Orthodox Judaism.

Martha Beck, Leaving the Saints: How I Left the Mormons and Found My Faith (2005)
Do you see a trend in my reading habits? Part memoir, part religious history, this compelling, controversial book by a Harvard-educated sociologist describes the fallout from her recovered memories of sexual abuse by her father, a leading Mormon scholar. Her anger is leavened by compassion as she delves into the complicity of a secretive church culture in creating and shielding abusers with split personalities. Though the topic is a dark one, readers who accompany Beck on her healing journey will be rewarded with her account of her strengthened connection to God’s love and her own inner truth.

Judith Herman, Trauma and Recovery (1992, updated 1997)
This groundbreaking book shows the common patterns underlying private and public trauma, from domestic violence and child abuse to war and genocide, as well as the cultural conditions that determine whether such stories are shared or repressed. The Amazon blurb says it best: “The book puts individual experience in a broader political frame, arguing that psychological trauma can be understood only in a social context.”

Sylvia Brinton Perera, The Scapegoat Complex: Toward a Mythology of Shadow and Guilt (1985)
Jungian analyst interprets scapegoat themes in the family and society. As in Johnny Cash’s song “The Man in Black”, the scapegoat is a priestly yet despised figure who takes on the burden of others’ psychological dark side (or has it thrust upon them) in order to heal the social system. But this role, formerly expressed through public ritual, can be too much for mere individuals to bear. This brief but dense book discusses how to appreciate but also break free from one’s scapegoat characteristics.

Blogs You Should Know About:

Be the Change (Dianna Anderson)
Christian feminist critiques rape-enabling myths and other harmful beliefs about gender and sexuality. She has a good sense of humor.

Sarah Over the Moon
Another Christian feminist and survivor of evangelical purity culture who lived to tell the tale.