Certain epithets can immobilize us, accusations that lock down our brains with shame and make us feel we’ve been turned to stone. For many men in this culture, I suspect, being called “weak” has this effect. For women, the charge that’s supposed to stop us in our tracks is “selfish”.

Remember the Greek myth of Medusa, the most famous of the Gorgon sisters. (If they were Destiny’s Child, she’d be Beyonce.) Anyone who beheld her terrible visage, wreathed in snakes instead of hair, would be turned to stone. The “hero” Perseus managed to defeat her by holding up his mirrored shield before her face. While she was immobilized by the sight of herself, he cut off her head, which later made a handy weapon whenever he needed to petrify someone else. Wikipedia tells me that according to some versions of the myth, Medusa was originally a pretty hot number, but the goddess Athena punished her with ugliness after the sea-god Poseidon raped Medusa in Athena’s temple. Victim-blaming has a long history. Hence my scare-quotes around “hero” above. Reiter’s Block is a no-rape-myths zone.

I think of Medusa these days when the word “selfish” gets thrown into discussions of women’s choices regarding parenting. Like the reflection in Perseus’s shield, a hateful image of ourselves is held up to deflect us from confidently following our instincts about what is right for our bodies and our personal relationships.

Six years ago, when I decided not to try any infertility treatments but skip straight to adoption, I struggled with insecurity that I wouldn’t be a sufficiently committed mother, because there were some physical invasions I would not endure in order to have a baby. I sometimes felt that people were withholding sympathy for our childlessness because I hadn’t really tried everything. Later, when one of the adoption agencies we worked with was pressuring me into psychiatric interventions that were actually dangerous to my mental health, I believe I allowed them to gaslight me for too long because they slapped the “neediness” label on my efforts to direct my own treatment. (Fortunately, in attempting to disprove their charge that I lacked empathy, I went through the volunteer training for our local domestic violence shelter, and figured out that my so-called personality disorder was really PTSD from emotional incest. Thank you, feminist consciousness.)

Other women get selfishness-shamed around motherhood in other ways. Those who do go through assisted reproduction treatments are sure to hear criticism at some point that it’s selfish to expend resources adding to our overpopulated planet when there are “so many adoptable children needing homes”. (Not true, by the way, but that’s another story.) Conservatives chastise women who choose not to raise children, saying they’re selfishly putting personal fulfillment ahead of the altruistic devotion that our society needs. Double that scorn for women who have abortions. Yet, birthmothers who place children for adoption face insensitive remarks like, “I don’t see how a woman could give up her own baby, she must be so unfeeling!”

We’re all familiar with the “mommy wars” around child-rearing choices, too. Career-oriented feminists scold women who drop out of the workforce to raise children; they’re letting down the team. If women employ childcare so they can return to work, they’d better be prepared to show they need the money; heaven forbid they should have ambitions of their own. Attachment-parenting fanatics preach that co-sleeping, breastfeeding, and constant physical contact are necessary to give children a secure sense of parental love. (I read one mommy-blog where her two-year-old insisted on sitting on her lap while the mom used the toilet, and she was afraid to disrupt their attachment by asking for some privacy.) But, watch out that you don’t become a “helicopter parent” who overinvolves herself in her children’s lives in order to meet her own need for control and significance.

Last year I began working with an Inner Bonding therapist to heal PTSD and false beliefs from a traumatic childhood. Based on this framework, I’ve come to believe that mothers trigger perceptions of “selfishness” in so many people, regardless of which choices the mother is making, because people are unconsciously angry about their own unmet childhood needs. Someone who had distant and unfeeling parents may view working mothers harshly, while someone who had smothering and needy parents may have a similar disdain for stay-at-home mothers. It’s speculative, but it’s been borne out by sad experiences with former friends. What I know of their personal history correlated with the particular ways they tried to side with my baby against me. By comparison, true friends (some of whom had equally painful childhoods) came in with the assumption that supporting the mother’s well-being helped the child and vice versa, not that motherhood was a zero-sum game of needs.

Again extrapolating from personal experience, I think the accusation of selfishness stops us in our tracks because so many women have suffered some kind of abuse–the ultimate act of selfishness–be it sexual assault, domestic violence, or spiritual domination and mind control. The last thing we want is to bear any resemblance to the person who used us so cruelly.

How about, as mothers or mothers-to-be, we practice saying, “This is what works for me and my family. It’s okay that other things work for other people.” Let’s also give ourselves permission not to answer questions when we sense that the inquirer doesn’t really want to learn something new, but instead is waiting to judge and refute our reasons as soon as she learns what they are.

Motherhood is authority. Whatever abuses of power we’ve seen, we can learn how to exercise authority with maturity and compassion. Growing up is an act of self-care that is also the key to unselfish parenting. 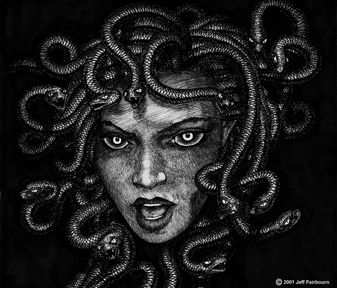 If Mama ain’t happy…ain’t nobody happy.

(Image courtesy of this link.)

2 comments on “The Gorgon’s Head: Mothers and “Selfishness””