Three weeks ago I made another one of my longtime fashion dreams come true.  I got my first tattoo. 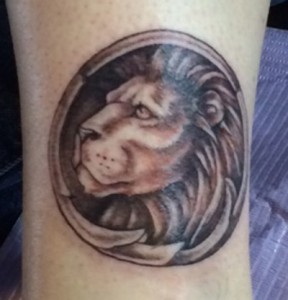 This lion who now lives on my left ankle represents Aslan, the Christ-figure in the Narnia books, as well as the courage of my male spiritual side. The original artwork by Nycci Traynor at InkWell Studio in Bristol, CT is based on our first Winning Writers logo. (Now that’s corporate loyalty.) 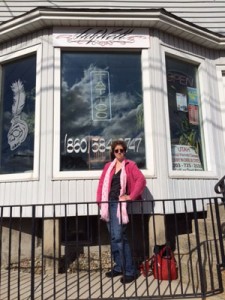 I promised myself a tattoo when I finished the latest revision of The Endless Novel, back in August. As the appointment date approached, though, I was getting cold feet. I wasn’t anxious about the pain so much as the commitment. My beliefs, priorities, and personal style have gone through major changes several times already. What if the image I chose no longer represented me in a few years? I asked my oldest friend for advice. He said he was also contemplating a tattoo with a symbol that would remind him that God was always there for him. So that’s how I made my choice.

I’m glad he got me thinking about tattoos as a spiritual practice. Ink can be a beautiful, unique, and (after the first couple of weeks) zero-maintenance form of adornment. But beyond that, for me it’s a way of taking ownership of my body. Creative control, if you will. I can go beyond the limits of what I was given, and turn my body into a visible record of my inner journey.

In some indigenous cultures, tattoos and other forms of body modification play a role in rites of passage. They mark a permanent transition to adulthood and demonstrate the bearer’s physical endurance and bravery. This aspect of tattooing also became important to me when I was under the needle.

So how painful was it? It was pretty much what you’d expect from having needles stuck in your leg for two hours. In other words, equivalent to about five minutes on the phone with my childhood abuser. (This is the universal standard of measurement in our household.) And unlike such conversations, the emotional aftereffects of being inked were nothing but positive.

I didn’t enjoy the pain per se, but it turned out I enjoyed how tough it made me feel. As it was happening, I compared it to other types of pain I’ve experienced, and reassured myself that I could handle this. I gained a clearer perspective on the boundaries between pain, suffering, and abuse.

Buddhists distinguish between pain, the unpleasant sensation itself, and suffering, the way we compound our pain by proliferating fearful or angry thoughts about it. There was no suffering involved in my tattoo because it was purposeful, consensual, time-limited, applied by someone I trusted, and chosen from a position of self-affirmation. Compare, for example, the facial hair electrolysis I had in my 20s, which was the closest equivalent to the physical sensation, but was much more of a downer because I was doing it to fix something I felt was wrong with me, not to make my awesome self more awesome.

Last month, Sarah Bessey at Jesus Feminist put up a post saying that Christians should not engage in consensual sexual practices involving domination and pain. She argued that such fantasies trivialized the societal problem of abuse, and ran counter to the Christian ethic of nonviolent love.

Without any experience to contradict Bessey, I was inclined to agree with her, but two of the Christian feminists I most respect, Sarah Moon and Samantha Field, offered cogent rebuttals that opened my mind. From Field’s post:

What I love about kink is how it exposes us as a couple. It puts the amount of love we have for each other and how deeply we trust each other fully on display in a way that more vanilla sex just doesn’t. For me, when I’m subbing, there’s an unbelievable amount of anticipation that is almost joyful. I don’t know what he’s about to do, or where this is about to go, but I know that I’m going to love it.

The best part is that I have complete and total control over what happens. As a rape victim, I cannot overstate how much that means to me. When Handsome and I are in a scene, I know that if he attempts something that makes me uncomfortable I can put an instant stop to it–but that hasn’t even happened yet. While we’re playing, we’re attentive to each other in a way that we don’t quite attain when we’re having a missionary quickie. Whoever is on top is watching every single breath and twitch, and we’re communicating with each other more than any other time we have sex. And because I know he is watching me incredibly carefully, I’m free to let go; he’s pushed me in ways I didn’t think was possible, and that’s happened because I trust him and I know he loves me…

…[P]ain is not the same thing as violence, and causing pain is certainly not the same thing as abuse. That’s not even an argument that makes sense–everything in our daily lives belies that. It’s non-consensual pain (emotional or physical) that is an intrinsic violation and is always wrong, full stop.

The anonymous guest writer at Moon’s blog shared similar thoughts about the satisfaction of pushing one’s limits in a consensual, trust-filled environment:

Here is what it feels like for me, as a submissive who is otherwise a perfectionist, to be in the hands of a trusted partner: relaxation. Gratitude. Is it okay for me to be this lazy and still feel this good? No need to think, to stress. Just receive.

Here is what it feels like for me, a dominant who was raised in a culture where women aren’t really supposed to want power, let alone claim it: awe. Look at what I can do. Look what he wants from me, what he trusts me with. Look how wonderful he looks…

…Sex is fraught with connotations, with connections hidden in the subconscious. Power dynamics are also fraught. Examine everything. In fact, I will be prescriptive here: the more closely an action mimics oppressive power structures, the more closely you should examine it before acting on it or making it a deliberate part of your fantasy life.

And if an action seems to replicate those power structures too closely for your comfort, that is a good reason for you to refrain from an act. In fact, I think it’s a fantastic reason. Society does program us all in certain ways, and it is our duty and responsibility to be on the lookout for that.

But “too close for comfort” for you does not mean that other people can’t navigate it safely.

And assuming that one can draw a line in the sand where the actions on one side are “good” and the actions on the other side are “bad” is a practice that Christianity has engaged in for too long.

Because of how I felt while getting inked, these arguments resonate with me, in a way that might not have been possible before. Tattoos are more mainstream than they used to be, but a lot of people still judge tattooed women as rebellious, self-destructive, not respectable, etc. That’s why I placed mine on my ankle, where I could easily hide it with clothing when I need to look “professional”. (A demand that’s fortunately rare in the life of a poet.) Intent and effects matter more than some list of approved and un-approved actions tagged with pre-fab psychological explanations.

Is my painful body modification partly a response to my trauma history? Maybe so…but my response is…