Is it just a coincidence that April is both National Child Abuse Prevention Month and National Poetry Month? 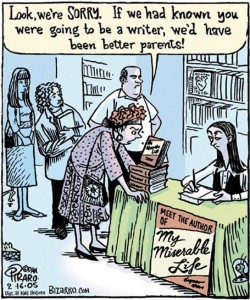 In that spirit, I’d like to share some excellent articles I’ve discovered this month about family trauma and recovery, and a poem from my new collection, My Miserable Life…oops, I meant Bullies in Love. Special #NaPoMo promo: Order your copy of Bullies, email me the receipt (jendi@winningwriters.com), and I’ll mail you a free copy of my award-winning chapbook Swallow. Even if you live in Tasmania.

I’m a dry tit, a blackened heartsteak.
Since memory
began a pink baby tumor has been cradled
on my ribs, curtaining
my girlhood’s one-act ballet.
Where is it now, inseparable sucking warmth,
sleepless fury, what selfish operation
uprighted me? Pounds of wet fat gone,
the thin belle shivers
in the too-wide spotlight, the crowds of love
never enough to heat the distance.
Don’t blame her for dancing
with such momentum she topples off the stage
like a drill bit spun askew in a splintered board.
I’m that dragged ankle, that pin in the bone remaining
after the symphony has laid down its burden
and the cheap statues
trundled into the closet,
the Act One virgin with no hands to save money
because the plaster baby is supposed to fit there.
Like all frivolous things, it’s a cruel vocation
always to be missing you, mother-
less child, as the feet miss bleeding,
as the red shoes miss being danced to tatters
in the ruthless illusion of flight.

My mother was a charismatic, creative person who always acted like normal rules didn’t apply to our family. Including the rules of sanity, I eventually noticed. So it’s both validating and slightly deflating for me to go down the checklists in these articles about emotional abuse and mother-daughter role reversal: “Yeah, we had that… and that.. .and that too… wow, I didn’t know there was a name for that…” She wasn’t even original in her narcissism!

But this late revelation highlights a deficiency in our cultural picture of “abuse”. The movies-of-the-week and PSAs usually feature a man hitting a woman. We have trouble recognizing that women can be equally harmful perpetrators, and that their violations are often disguised as affection that’s hard to refuse. Look at the Internet reaction to Madonna’s forcing a kiss on young rapper Drake at the Coachella music festival last week. Because of the mockery surrounding the whole concept of female-on-male sexual assault (see also: Shia LaBeouf), he’s had to pretend that he didn’t mind it, when his body language tells the opposite story.

And now, the links:

*At the website Womb of Light: The Power of the Awakened Feminine, life coach Bethany Webster discusses the complex interplay of patriarchy and mother-daughter emotional incest in her 2014 essay, “When Shame Feels Mothering: The Tragedy of Parentified Daughters”. This piece was extraordinarily close to my own experience.

The road between a little girl and her mother is supposed to be a one-way street with support flowing consistently from the mother to the daughter. It goes without saying that little girls are totally dependent on their mothers for physical, mental and emotional support. However, one of the many faces of the mother wound is the common dynamic in which the mother inappropriately depends on the daughter to provide her with mental and emotional support. This role-reversal is incredibly damaging to the daughter, having long-range effects on the her self-esteem, confidence and sense of self-worth.

Alice Miller describes this dynamic in “The Drama of the Gifted Child.” The mother, upon having a child may unconsciously feel that finally she has someone to love her unconditionally and begins to use the child to fill her needs that were not met in her own childhood. In this way, the child begins to carry the projection of her mother’s mother.  This puts the daughter in an impossible situation to be responsible for her mother’s well-being and happiness…

…Patriarchy has deprived women to such a degree that when they become mothers, they often turn to the love of their young daughters starving and  ravenous for validation, approval and recognition. A hunger that a daughter could never possibly satisfy. Yet generation after generation of innocent daughters have been offering themselves up, willingly sacrificing themselves on the altar of their mother’s suffering and starvation, with the hope that one day they will finally “be good enough” for her. There is a childlike hope that by “feeding the mother,” the mother will eventually be able to feed the daughter. That meal never comes. You get the “meal” your soul has been longing for by engaging in the process of healing the mother wound and owning your life and your worth…

Why it’s hard to face how your mother was a perpetrator:

Why is self-sabotage a manifestation of the mother wound?

*The Invisible Scar is a website devoted to raising awareness about emotional abuse of children. This article, “Not Only Shouting: Different Types of Emotional Child Abuse”, explains why certain behaviors are so damaging, and why it’s hard for us to name them as such. Again, I am a texbook case. Silent treatment, triangulation, pathological lying, sabotaging… Look, I completed my Bingo card, what’s the prize? Recovery!

…The abusive parent will withhold attention and affection until the child caves in and apologizes for whatever the abuser perceived as a slight or insult. Through a series of silent treatments, the abused child will learn to be silent, to be docile, to never speak against the parent—because if the child does, he will not be loved or spoken to or even acknowledged as a human being…

…“Bunny Boiling is a reference to an iconic scene in the movie “Fatal Attraction” in which the main character Alex, who suffers from Borderline Personality Disorder, kills the family’s pet rabbit and boils it on the stove. Bunny Boiling has become a popular reference to how people sometimes exhibit their rage by behaving destructively towards symbolic, important or treasured possessions or representations of those whom they wish to hurt, control or intimidate.” (Out of the FOG website) Whatever the child treasures, an abusive parent will take away or destroy…

…An emotional child abuser will sabotage a child’s calm and peace. For example, if a child looks forward to a television program, at the last minute, the emotional child abuser may deliberately set forth a ridiculously long chore list to be done before the child can watch the show. (Think of the evil stepmother in “Cinderella,” who set up Cinderella to fail by giving her too long a list of items to do before the ball.) Or the father will deliberately schedule a family meeting at the same time that a child had planned ahead of time to attend a friend’s birthday party. Like all forms of emotional child abuse, sabotaging ruins a child’s sense of security…

That was a real downer, so here’s a picture of two cute bunnies, in what we hope is an emotionally healthy relationship. Thanks for reading this far, kids. 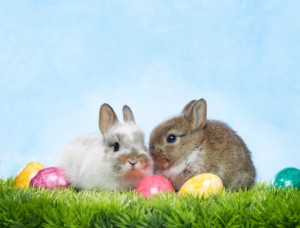