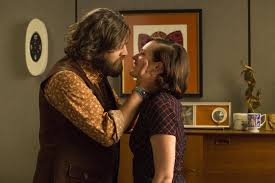 “Mad Men”, a TV drama that was truly a work of art, came to an end last Sunday with the season 7 finale “Person to Person”. The most-debated question on the Internet is whether self-destructive genius Don Draper found enlightenment after his emotional breakthrough at Esalen, the New Age retreat center, or returned to New York to create the iconic 1971 “I’d like to buy the world a Coke” ad. Style mavens Tom and Lorenzo have pointed out telltale costuming similarities between the real-life ad and the characters at Don’s encounter group.

As Oscar Wilde would say, “To be natural is such a very difficult pose to keep up.”

In my view, the ambiguous ending challenges us to examine our beliefs about the appearance of sincerity in art. The finale wrapped up most of the main characters’ storylines on a surprisingly upbeat note, giving us more closure and optimism than we’ve grown to expect from serious literary dramas. Was the final shot of the Coke ad supposed to challenge our enjoyment of happy endings–a jab from the show’s creators saying “This is fan-service, you asked for it, but remember this isn’t real“? The territory of simple, straightforward emotional catharsis has been so successfully colonized by advertising that a great deal of postmodern high culture is devoted to remixing those sentimental images in a degrading or dystopian fashion. The contemporary art museum is Don Draper’s wastebasket.

On an alternative reading, irony and sincerity are both performances. Our emotions are genuine but our expression of them is formed by social cues. Mass media bombards us with images of how to be whatever we are. Even if we don’t watch TV, we are watching other people who do, to figure out how to present ourselves in a way they’ll understand. George Saunders took this insight to extremes in his poignant, horrifying story “Jon”, where teenage lovers in a market-research prison camp literally can’t look at the moon without a commercial for Rebel CornBells playing in their brain implants.

Like me, Don is compulsively creative. He makes art to understand his feelings and to run away from his feelings; to connect with others and to substitute for personal relationships. (In that sense it’s an extension of his sex addiction!) I’m certain that if I’d wrecked my life, had a tearful breakdown in a therapy group, and found inner bliss on a mountaintop, part of my brain would constantly be observing myself throughout those experiences, thinking “What does this feel like? How can I describe it? How can I use it in my next writing project?”

In other words, the impulse to produce something worldly, even commercial, out of your moment of enlightenment doesn’t mean that enlightenment wasn’t genuine. And on the flip side, boundary-less emotionalism and flamboyant devotion to spiritual practice can also be a mask for egotism, passive-aggressive power, and seduction. I would have been more worried about Don (not to mention the women around him) if he’d instantly transformed into a smiling guru who hugged everyone. It was both funny and creepy to hear the middle-class hippies at Esalen using what I call the “group therapy voice”, the breathy, spaced-out delivery that disguises backstabbing judgments as vulnerable I-statements. 45 years later, it’s as much a pose as Betty Draper’s helmet hair and fatal cigarette. 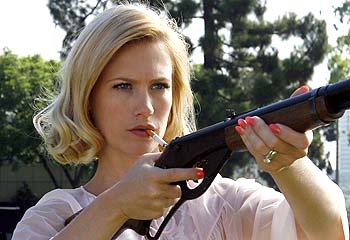 I prefer to remember her this way.

For me, the show’s multi-layered ending could mean that we don’t have to concede the field of sincere feeling to McCann-Erickson. We can become conscious of the fact that our aesthetic nihilism is a defensive reaction to the emotional manipulations of Madison Avenue. “There is no Real Thing” is not necessarily any truer than “Coke is the Real Thing”.

Peggy Olson is my hero because she was always real. Whereas Don succeeded by presenting himself as whatever people wanted to see–so successfully that he lost sight of his own identity–Peggy succeeded by not caring what others thought of her. Her ego is in her work, not in her performance of “Peggy Olson”.

Which doesn’t stop her from being fiiiine.

New York City fans: There’s a “Mad Men” costume exhibit at the Museum of the Moving Image in Astoria till June 14. Next month, I will be in the presence of the holy relics of Peggy! Hail thee festival day!

UPDATE June 6: I went to New York City Ballet on Saturday night with my father and stepmother, and who should be sitting next to us, but the lovely Elisabeth Moss herself! She was so gracious to me when I recognized her, and signed my program. I didn’t want to seem crass by asking for a selfie with her. It was beyond my wildest dreams merely to be in the Real Presence. 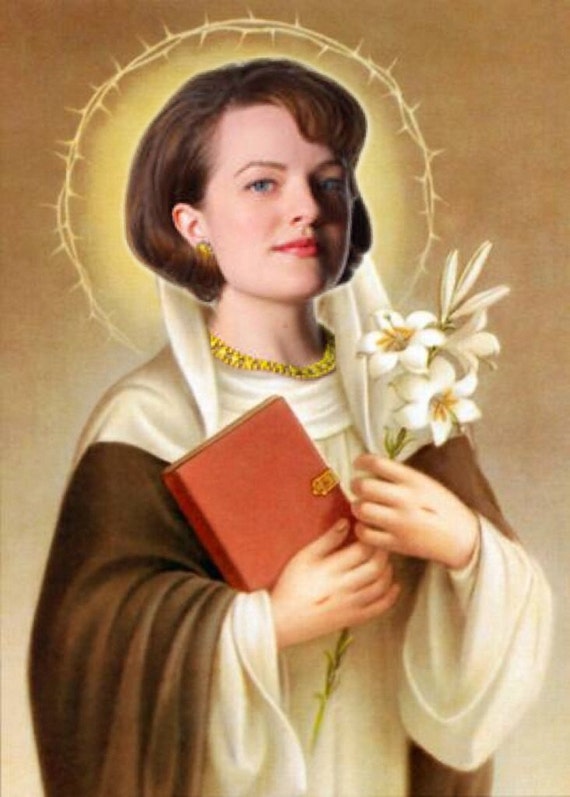 I also didn’t tell her I have two of these prayer candles. Because that would be weird.