This morning the U.S. Supreme Court ruled 5-4 in Obergefell v. Hodges that under the Equal Protection Clause of the Constitution, gay and lesbian couples have a fundamental right to marriage equality! States may no longer ban same-sex marriages or refuse to recognize such marriages performed in other states.

Gay and lesbian couples already could marry in 36 states and the District of Columbia. The court’s 5-4 ruling means the remaining 14 states, in the South and Midwest, will have to stop enforcing their bans on same-sex marriage.

The outcome is the culmination of two decades of Supreme Court litigation over marriage, and gay rights generally.

Justice Anthony Kennedy wrote the majority opinion, just as he did in the court’s previous three major gay rights cases dating back to 1996. It came on the anniversary of two of those earlier decisions…

…The cases before the court involved laws from Kentucky, Michigan, Ohio and Tennessee that define marriage as the union of a man and a woman. Those states have not allowed same-sex couples to marry within their borders and they also have refused to recognize valid marriages from elsewhere.

Just two years ago, the Supreme Court struck down part of the federal anti-gay marriage law that denied a range of government benefits to legally married same-sex couples.

The decision in United States v. Windsor did not address the validity of state marriage bans, but courts across the country, with few exceptions, said its logic compelled them to invalidate state laws that prohibited gay and lesbian couples from marrying.

From the New York Times:

The decision, the culmination of decades of litigation and activism, came against the backdrop of fast-moving changes in public opinion, with polls indicating that most Americans now approve of same-sex marriage.

Justice Kennedy said gay and lesbian couples had a fundamental right to marry.

“No union is more profound than marriage, for it embodies the highest ideals of love, fidelity, devotion, sacrifice, and family,” he wrote. “In forming a marital union, two people become something greater than once they were.”

“It would misunderstand these men and women to say they disrespect the idea of marriage,” Justice Kennedy said of the couples challenging state bans on same-sex marriage. “Their plea is that they do respect it, respect it so deeply that they seek to find its fulfillment for themselves. Their hope is not to be condemned to live in loneliness, excluded from one of civilization’s oldest institutions. They ask for equal dignity in the eyes of the law. The Constitution grants them that right.”

Big thanks to GLAD (Gay & Lesbian Advocates & Defenders) for arguing this case before the Supreme Court. (The case named on their website, DeBoer v. Snyder, was consolidated with Obergefell and two others.) Check out the Tumblr blog at Freedom to Marry for inspiring photos and stories of celebration around the country.

When I was born, homosexuality was still labeled a psychiatric disorder. There were no children’s books with two-mom families like mine. Although I went to an arts high school in NYC in the 1980s, I didn’t know any out gay teenagers. I’m happily stunned that this tremendous social change has happened during my lifetime.

I know that the struggle for social justice is not over, for the LGBT community and others. But please, hold off on the cautionary tweets and think pieces, for just one day. Let’s give ourselves a Sabbath of rejoicing. 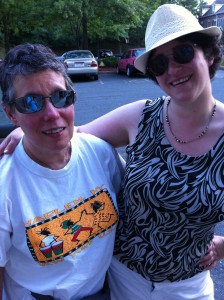 My super cool lesbian mom and me, summer 2011. Come party with us in Northampton tonight!