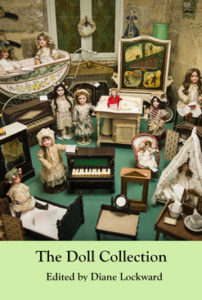 “Not just toys, dolls signify much more than childhood,” writes poet Nicole Cooley in her introduction to The Doll Collection (Terrapin Books, 2016), a rich and complex anthology of doll-themed contemporary poetry edited by Diane Lockward. Dolls are imbued with our powerful, contradictory feelings about gender, race, class, mortality, and innocence. “Symbols of perfection, they both comfort and terrify… They are objects we recall with intense nostalgia but also bodies we dismember and destroy.”

Collecting dolls has been as much of a constant in my life as writing poetry. Both pursuits take me to the realm of imagination, where one is never “too grown-up” to communicate with one’s fantasies and fears. I was honored to have my poem “The Fear of Puppets and the Fear of Beautiful Women” included in this anthology, together with notable writers such as Denise Duhamel, Jeffrey Harrison, Enid Shomer, Cecilia Woloch, and many more.

The book stands out for its diverse cast of characters from doll history. Alongside the well-known Barbie, GI Joe, Mr. Potato Head, Ginny, and Raggedy Ann, we meet paper dolls of the Dionne Quintuplets, blow-up sex toys, jewel-box ballerinas, anatomical models, artists’ miniatures, teddy bears, and baby dolls in many stages of porcelain perfection or grotesque dismemberment. Dolls are burned, smashed, stolen, repaired, reconstituted like Frankenstein. They are preserved in museums, or in the homes of their now-grown owners, as a focal point for sweet or regretful family memories. The dolls in these poems remind us of love or its hard unsatisfying simulacrum, of fragility or a taunting imperviousness to time and loss.

“The dolls/are always being picked up and placed/by forces outside their control./Words are put into their mouths,” writes Elaine Terranova in the poem “Secrets”. Dolls give us the opportunity to act out both sides of the power dynamic, to identify with early memories of helplessness or vent our rage on someone who can’t really feel it…can she?

Several selections voiced the feelings of children confused or stifled by an adult agenda. “I was the live birth after the stillborn/one, crowned to be Mother’s little doll,” says the speaker of Joan Mazza’s “Little Doll”. Comparing herself to the identically-dressed doll children in her carriage, she says, “Undressed, baby dolls had smooth bodies,/no crevices. I’d be perfect, never play,/an untouched doll, if mother had her way.” By the poem’s end, “mother” is lowercase, suggesting the young girl’s rebellion. Michael Waters’ “Burning the Dolls” starts from a poignant historical anecdote: “In 1851, in John Humphrey Noyes’ free-love settlement in Oneida, New York, the communally-raised children, encouraged by the adults, voted to burn their dolls as representative of the traditional role of motherhood.” The child narrator lays her beloved rag doll on the pyre, but a lot more goes up in flames: “when her varnished face burst/in the furnace of my soul,/the waxy lips forever lost,//then I knew I’d no longer pray,/even with fire haunting me…”

Conversely, for some other poets, dolls represented childhood feelings of safety and trust, which the adult speakers wish they could recapture. In “When Catholics Believed in Limbo”, Mary Ellen Talley recalls a simple faith that led her and her friends to baptize her Little Women dolls. Lee Upton’s “To Be Blameless Is to Be Miniature” searches for a way back in to the dolls’ perfect world: “No one sleeps./No one gets comfortable here./You cannot stand inside innocence.” Alison Townsend begins her prose-poem “Madame Alexander’s Amy” with the line, “Two weeks after my mother’s death, the doll was waiting under the tree.” The speaker wanted to love this last gift from her mother, and in a way she did, but the doll (which she still owns) was also “an emissary from the country of death to tell me that childhood was over, and she was the last plaything”.

David Trinidad’s “Playing with Dolls” and Scott Wiggerman’s “Playing GI Joes” show the awakening of a gay identity through breaking the gender boundaries around toys. While Trinidad’s sestina ends sadly, with his parents forbidding him to play with his sisters’ Barbies (“You’re a boy”), we know he gets the last laugh because he’s now a well-regarded gay poet. Wiggerman’s delightful narrative reveals how hyper-macho toys have a homoerotic side just waiting for the right person to bring it out. His GI Joe likes “hot little loincloths attached with a pin” and volunteers for missions where he’ll be stripped and put into bondage. “Tied up, disciplined, tortured into a frenzy,/he was a master of man-to-man endurance,/revealing only name, rank, and serial number,/as a sly grin edged toward the scar on his cheek,/a mark that covered so many of our secrets.”

These are just a few highlights. Doll aficionados will find their own favorites in this must-have collection of 80+ poems about our uncanny little friends. 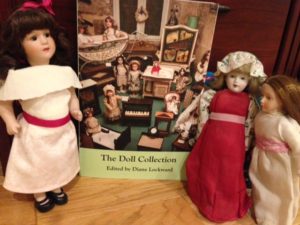 Olivia, Agnes, and Emily approve of this book. 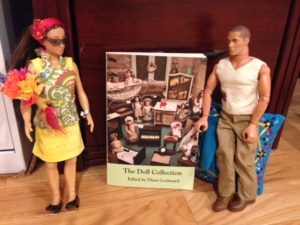 A new soldier in town impresses Rose Sauvage-Grimpante with his interest in poetry.