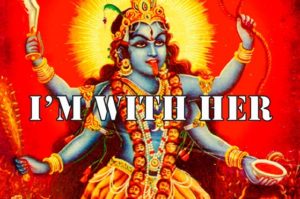 “Turn your face away from the garish light of day, Turn your thoughts away from cold unfeeling light, And listen to the music of the night,” the Phantom of the Opera sings in Andrew Lloyd Webber’s musical. These lines captured my heart when I saw the show 25 years ago. Darkness as fertile, safe, restful, profound, and full of tenderness.

As we approach the Winter Solstice, and a political transition that feels apocalyptic for many, the spiritual qualities of darkness invite closer attention. In both popular culture and pagan literature, we need to rethink the colonialist metaphor of “light” magic as good and pure, “dark” or “black” magic as evil and sexually decadent. Lasara Firefox Allen’s Jailbreaking the Goddess, a new book of intersectional feminist spirituality, suggests the terms “empowered” and “occluded” (rather than the Jungian “shadow”) to refer to the helpful and destructive aspects of an archetype.

I’ve been exploring the Pagan channel on the religion blog portal Patheos, which is where I found John Beckett’s blog, Under the Ancient Oaks. Beckett is a Druid and Unitarian Universalist. In a post written shortly after the presidential election, “Be the Dark”, he had a refreshing take on the ubiquitous urgings on social media to “be the light”. Many of us on the Left did not have a ton of happy confetti to throw around last month. We were feeling scared, despondent, angry, and overwhelmed. Even if we had it in us, was spreading positive vibes really helpful or a form of denial? Beckett reflected:

[W]hat if you don’t particularly feel like being the light? What if you’re still hurting, still afraid, still mad as hell? What if you’re just not a love and light kind of person?

Then be the dark.

He went on to praise other positive qualities of the dark: restfulness, nurturing, and the ability to create illusions. Finally, he dared to encourage us to be the danger of the dark:

Here we shift from nice safe pretty Nature metaphors to the reality of what must be done in the dark… Being the danger of the dark is knowing in your soul that you’re scarier than anything that might come after you. This isn’t the testosterone-driven braggadocio of young men. Rather, it’s the quiet confidence that comes from the direct, first-hand experience of Gods, spirits, and magic. It’s knowing you have allies in the Otherworld – not servants you can call down at will, but mighty Powers with whom you are aligned and at whose side you will fight… and win, eventually if not immediately.

It’s knowing spells that go against your morals, that you would never use… unless there was no other way.

It’s knowing that as long as you have breath you have hope, because you have magic and you have Will.

Some of the most interesting scenes in Once Upon a Time happen when Regina, the semi-reformed Evil Queen, must partner with the heroes to fight a threat to their town. She’s a risky but invaluable member of the team because she’s willing to be the bad cop when nothing else works. In the current season, she’s split off her Dark side so that she can be a good person who gets a happy ending, but dis-integration is not working out well for her or anyone around her.

Also on the subject of Dark Goddesses, a friend sent me religion scholar Vera de Chalambert’s article “Kali Takes America: I’m With Her”.  (The subtitle was Hillary Clinton’s campaign slogan.)

…Donald Trump might already be picking his deplorable cabinet, but it is the Dark Mother, the destroyer of worlds, oracle of holy change, the tenderhearted be-header, that won this country. Kali has brought down our house in a shocking blow; all the illusions of America, stripped in a single night. We are not who we thought we were. Now we must get ready to stand in her fires of transmutation. We need them…

Paradoxically, the price of true hope, it seems, is being unsettled beyond repair. And this is exactly the opportunity our political moment is presenting to us all. Right now, from all corners of our shocked culture, there are cries of hope, demands of needing to become even brighter lights amidst the spreading darkness. I disagree.

I think that this moment gives us an opportunity for reckoning only if instead of running for the light, we let ourselves go fully into the dark. If instead of resolving our discomfort too quickly, we consider the possibility of staying in the uncomfortable, in the irreconcilable, in the unsettled.

Before we rush in to reanimate the discourse of hope prematurely, we must yield to what is present. Receptivity is the great quality of darkness; darkness hosts everything without exception. The Dark Mother has no orphans. We must not send suffering into exile — the fear, the heartbreak, the anger, the helplessness all are appropriate, all are welcome. We can’t dismember ourselves to feel better.

We can’t cut of the stream of life and expect to heal.

Cutting off the inconvenient is a form of spiritual fascism. By resolving to stay only in the light in times of immense crisis, we split life; engage in emotional deportation, rather than hosting the vulnerable. Difficult feelings need to be given space so they can come to rest. They need contact.

In a culture of isolation, be the invitation to everything.

The intuition that the Dark Mother has returned is pervasive if we heed the signs, and our thirst for the dark is deep.

She may not be an official Goddess yet, but Ursula the Sea Witch (from Disney’s “The Little Mermaid”) is the form that the Dark Mother has been taking for me lately. Like Kali, she has a lot of arms, and she’ll fuck you up. Half octopus, half chanteuse, she is loud, large, lusty, and speaks the truth that you may not want to hear. She’ll tell you the price of following your dreams. Can you pay it? 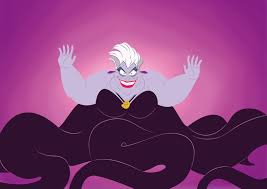 I had no gaydar when “The Little Mermaid” was released in 1989, but when I re-listened to Ursula’s song “Poor Unfortunate Souls” a few months ago, it was obvious she was a drag queen! Was I just reading my own preoccupations into her? Nope. In the literary journal Hazlitt, Nicole Pasulka and Brian Ferree’s article “Unearthing the Sea Witch” reveals that she was based on none other than Divine, the countercultural icon of outrageous filthiness from John Waters’ movies. Lyricist Howard Ashman, a gay man, also added a smidgen of Audrey II, the carnivorous plant from his hit musical “Little Shop of Horrors”.

The article concludes, “Ursula is a plum role because as Glenn Milstead [Divine’s birth name], Howard Ashman, John Waters, and generations of queers and drag queens know, being ostracized, fat, and sick can bring its own strength and power… [I]n stories like these there is no convention. There are only relationships. Deep, firmly felt connections between strange, gross, gorgeous, and utterly authentic characters. What’s subversive about Ursula, Audrey II, and Divine is that they cannot be contained.”