My results on the RDOS Aspie Quiz 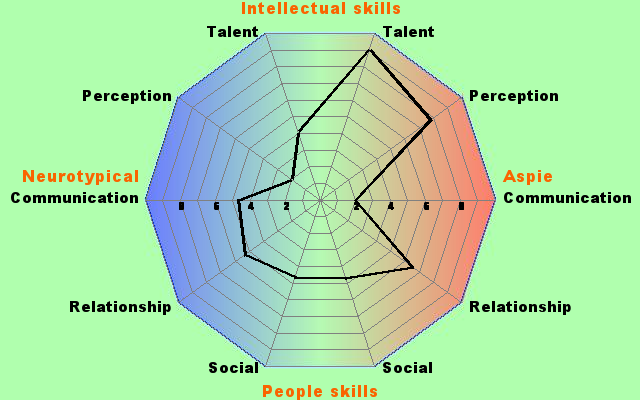 Had I taken the above quiz before I got married and moved out of my abusive home, I would likely have scored further to the right (neurodiverse) side of the chart. I was so special-topic-y as a kid, you wouldn’t believe it. (Ask me something about Medieval and Renaissance English history, I dare you.) This made me successful in certain high school classes but incomprehensible to my peers. A holdover from this experience is that whenever I’m very excited about a new interest, or absorbed in writing a scene in my novel, a self-hating voice cranks up: “Nobody cares about this!” I’m feeling it right now as I write this post!

Social media has helped normalize my love of niche specialties. If I want to talk about the Trinity, or trauma theory, or genderqueerness, for an entire year and see everything else in life through that lens, there is some micro-community in the blogosphere or on Twitter that will go along for the ride. I am self-employed now, also thanks to the Internet; I can take a break with friends who share my interests, then return to the solitary bliss of a home office customized for my sensory sensitivities. It’s harder to fit in when one’s social world is limited to the random people in a school or workplace, where every day involves awkward negotiations around accessibility in a shared space that’s too loud, bright, or poorly ventilated for a neurodiverse person.

Even taking those new freedoms into account, the social skills component of the spectrum has shifted considerably for me over time. My youth was spent in a perpetual state of rage and anxiety from being bullied at home and at school. Not only did I not have the bandwidth to figure out what other kids were thinking and feeling, I eventually lost the motivation. As a matter of principle, I refused to walk in the shoes of people who had never shown empathy for me. Moreover, my mother’s narcissism raised her idiosyncratic tastes to the status of Old Testament purity laws; I was actively forbidden to consume media that would have helped me understand my peers’ cultural references, or to wear age-appropriate stylish clothes. The only way to salvage some self-esteem was to wear my weirdness defiantly.

I don’t have the typical Aspie presentation of being unable to read facial expressions or emotions. I love analyzing people’s feelings and relationship patterns–I’m a novelist. Survival in my mother’s house also required me to anticipate her every whim, so much that I sometimes feel I’ve used up my lifetime quota of mind-reading energy. However, in my youth, I was much more literal about thinking their feelings were wrong. I could understand in the sense of “I perceive she has a crush on that guy” but not in the sense of “I can imagine myself having a crush on a guy like that, or acting that way about a guy I liked”. Ayn Rand was right, attraction should be rational, damn it! I’m not really different now, I just have far lower expectations of people’s rationality, even my own.

This combative idealism carries over into situations where someone’s implied feelings and body language are at odds with their words and actions. I’m misled, perhaps more easily than a neurotypical person, into believing the explicit cues to the exclusion of contradictory implicit ones. But this is as much a choice as it is a blind spot. My anxiety spins out of control when I can’t trust that someone is being straightforward. Rather like letting my phone go to voicemail so that people will text me instead, I don’t try to read hidden signals because I want to encourage people around me to be direct. Does it work? How would I know?!

I was never diagnosed, nor do I see the need to get a formal diagnosis now, because I’m not seeking any medical services. But I’m discovering many wonderful female and genderqueer Aspie blogs where I keep having “Me too!” moments. They make connections between odd traits of mine that I never realized were related to anything.

I first got a clue that I was on the spectrum when I read Feminist Aspie’s post about her extreme sensitivity to heat. This problem that I share with her has probably been my single biggest obstacle to fitting in with “normal” social life (after I stopped being abused, that is). Because environments that most people find comfortable can put me into temperature meltdown, I often have to choose between bowing out of a group event for a reason that people think is stupid or untrue, or attending and making others uncomfortable with my access needs. Either way I risk being told that I don’t care enough about people, when in fact I am doing invisible extra work just to “relax” with them. The emotional labor that Aspie women and female-ish people do to stay connected is not really appreciated because of sexism; more on that in a future post.

Prosopagnosia (difficulty recognizing faces) is a common Aspie symptom that has caused me many embarrassing moments. When in doubt, I use a trick from Huckleberry Finn, updated for modern times. Ask the person to spell their name for your contact record in your phone. Then you will find out who they are!

I go for Feldenkrais integrative bodywork once a month, and we’ve been working on my mis-aligned feet and why I feel like I walk off-balance. Well, according to The Goodenoughs Get in Sync, a book we bought to help with the Young Master’s speech therapy, vestibular disorder is another sensory processing symptom. The Young Master is a sensory seeker while I am a sensory avoider with an added layer of hyperactive startle reflex from trauma. Picture, if you will, me trying to slice cucumbers in the kitchen while he pops up behind me and wants to touch everything I’m doing. As they say on the movie posters, comic mayhem ensues.

One could perceive a movement on this blog from “Trauma explains me!” to “Gender explains me!” to “Neurodiversity explains me!” Actually I see a complex interaction between child abuse and neurodiversity. Narcissistic parents impose a special kind of pain on an Aspie child because they take away her control over what she wears and eats and how she is touched. I now see that I spent much of my early life in constant sensory distress. It’s wrong for any parents to make their child caretake their emotions, but it’s a particularly cruel way to treat a kid who is neurologically programmed to fail at this, and will grow up internalizing her parents’ accusations that she is thoughtless, selfish, or unfeeling. Being Aspie makes it harder for a kid to find allies outside the home, so she doesn’t trust that anyone besides her (abusive) parents will understand or care for her. An awkward, “difficult” kid will be victim-blamed even more than normal. The learned helplessness from abuse keeps her from realizing that she has a right to accommodations and that there are environments where she could function at her peak.

Teachers, guidance counselors, friends: if you see this person, please buy her a stim chew toy and a copy of Alice Miller’s Banished Knowledge. 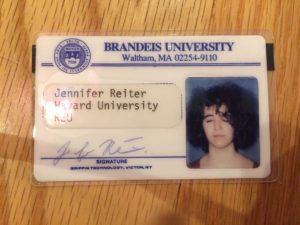