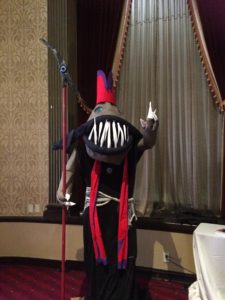 My visit to NecronomiCon 2017, the convention of H.P. Lovecraft horror fans and scholars in Providence RI, concluded with the Cthulhu Prayer Breakfast on Sunday morning. Darrell Schweitzer’s Amorphous Tabernacle Choir treated us to Mythos-inspired hymn parodies. Scott R. Jones spoke about the cosmicist philosophy of his book When the Stars Are Right: Towards an Authentic R’lyehian Spirituality, or as he likes to call it, “Keeping it Real-yeh.”  Horror writers Cody Goodfellow and Anthony Teth presided as priests of Yog-Sothoth and Shub-Niggurath, with mitres that the Episcopal Church could only envy. Goodfellow (left) even looks suspiciously like former Archbishop of Canterbury Rowan Williams. Hmm… haven’t seen him lately… 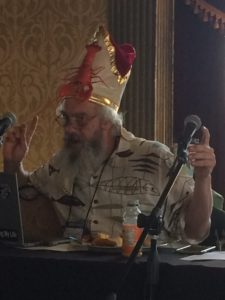 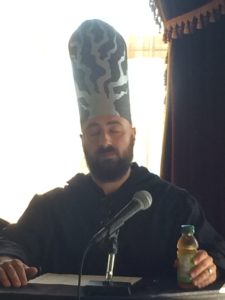 The genius of this Monty Python approach to religion is that you get all the fun parts of high-church Christianity–gory pictures, occult medallions, over-the-top vestments—without the doublespeak that death is life, torture is salvation, and the universe is a safe place. It reminded me of the Church of Satan, a humanist organization that doesn’t so much literally believe in evil supernatural entities, as reclaim those symbols to expose the weak spots in traditional religion. (Because humanism is just more fun with fancy dress.)

The Cthulhu Prayer Breakfast was finely balanced on the line between farce and sincere religious-philosophical questioning. The refusal to collapse one mode into the other seemed like a healthy shadow-integration, the Zen paradox that we approach the deepest wisdom through discovering our foolishness.

I wasn’t expecting a genuine religious experience at this conference, but I got one. At a couple of points during the weekend, I had this brief and unprecedented feeling of freedom from my constant strivings to cheat death and achieve significance. The Mythos looks mortality and infinity directly in the face and accepts them, even semi-ironically celebrates them, which I found such a relief from the relentless religious-cultural-psychological project of propping up the ego and distracting ourselves from the abyss.

The Prayer Breakfast sermons were solidly humanist rather than nihilist. That is, they used our humble and mysterious position in the web of life as a reason to reject all forms of xenophobia, arrogance, and fanaticism. I especially loved Teth’s “Sermon Against Purity”, reprinted on his website. Some highlights:

The concept of Purity is anathema to life itself, since any rudimentary study of biology can clearly show the interdependence of organisms to the life cycles of the invisible squirming masses of microbes, germs, and bacteria that cling to epidermis and esophageal tract, stomach lining and salivation ducts.

Enjoy your breakfast, by the way.

Those creatures made sterile or bereft of these helpful swarms in lab experiments grow weak and die, barely able to digest or process what would normally be considered “basic foods.”

Yet the concept of Purity is also anathema to death. Those aforementioned masses responsible for the continuance of a creature’s life will almost immediately begin devouring their host the moment life processes cease, while dozens of various mammals, reptiles, molds and fungal growths eventually have their fill and leave the rest to worms, mites, plants and trees. Even if we go back to the philosophical root of death itself, entropy, we find not this supposed purity, but an exceedingly complex system of devourment and proliferation, with cooperation and competition creating a teaming miasmal stew of wonder and possibility…

…And one of the most ridiculous of these, shall we say, Puritanical concepts, is where folks profess this enigmatic and frankly preposterous Purity within, of all bloody things, human genes. Yes, humans, those oddly bipedal, domestic primates who for thousands of years have been humping their neighbors, humping their friends, humping their neighbors’ friends and friends’ neighbors, until eventually deciding to migrate elsewhere and continue the rampant rutting cycle with whomever happens to be nearby and (theoretically) willing. Humans who have been mongrels since the beginning, and shall be so at the end.

Yet some take this even further, claiming even greater purity and superiority over these shambling masses of great apes, while carrying Polynesian garden torches of all things, and flashing a salute fit for Caesar…

…Yes, humans who claim superiority over all other terrestrial life on this adorably blue, spinning sphere due to a combination of brain size and thumb dexterity, but still have a helluva time figuring out that most basic of tenets: Don’t shit where you eat.

At the bookfair, I picked up a pamphlet of Robert M. Price’s sermons from the 1995-2006 Prayer Breakfasts, which I’m about halfway through. Price is an actual former Baptist pastor and theologian who went on a trajectory through liberal Christianity to atheist humanism. Some of his non-Cthulhu-related sermons are available on his website. He’s also a well-known literary critic and editor of Mythos fiction. “Founder and Editor, The Journal of Higher Criticism; Founder and Editor, Crypt of Cthulhu; Fellow, The Jesus Seminar“. You don’t see a resume like that every day!

Price’s Cthulhu sermons don’t have the positive political vision or moral center of the ones I heard this summer. He emphasizes the Nietzschean joy of facing the abyss. Spiritually, all we have is a choice of fictions. The ultimate forbidden knowledge is that there is no knowledge. Setting this alongside Lovecraft’s white supremacist views and the majority-whiteness of the conference attendees, I started to wonder whether there’s something white about this brand of intellect-driven disillusionment. It takes a certain amount of privilege and safety to feel that you can dispense with religion’s prophetic, justice-seeking function.

Simultaneously with Price’s sermons, I was reading James Cone’s 1969 classic Black Theology and Black Power to prepare notes for a church discussion group. In his chapter on black Christianity in America, Cone says the black church’s central theological problem was why God had allowed slavery to exist when it was so clearly a violation of God’s moral law. The courage and risk involved in affirming God’s existence notwithstanding, as a black person with this history, makes white death-of-God theology “seem like child’s play.”

It’s understandable to repudiate faith because you’re morally outraged by oppression, says Cone. “But if it arises out of one’s identity with an advancing technological secular society which ignores the reality of God and the humanity of man, then it appears to be the height of human pride.” (Here’s looking at you, Jesus Seminar.) According to Cone, only the oppressed, or those who are sacrificially in solidarity with them, really have the right to decide whether God is dead or irrelevant. “If theology fails to re-evaluate its task in the light of Black Power, the emphasis on the death of God will not add the needed dimension. This will mean that the white church and white theology are dead, not God.”

Perhaps our modern god has been an idol of (liberal) intellectual or (conservative) moral certainty, not a real presence we depend on in our helplessness and unknowing, so when those certainties die, God appears dead. Whether you replace that with the Jesus of liberation theology, or a sense of oneness with all life, I think there has to be something we align ourselves with, above the oppressive systems of the moment, so we can name falsehood and evil for what it is, and find strength to resist. Even Lovecraft’s anti-theistic stories are full of moral judgments and outraged adjectives–unspeakable, decadent, accursed, loathsome, and the like. The universe may not be on our side, but we ought to be.