Love comes in many forms, and even romantic love is not limited to sexual partnership. The bond between gay men and their female friends, though sometimes complicated by mismatched desire, can be as profound as a marriage. Artist and author Tom Taylor a/k/a The Poet Spiel explores this truth in a bittersweet narrative poem about the only woman he loved. Below is his portrait of Phyllis. He tells me she died in a plane crash in 1972 with her husband, leaving behind their two children. May their memory be a blessing. 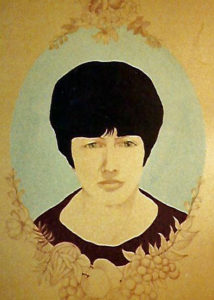