Two theology bloggers I follow have been exploring what’s next after one has deconstructed the conservative evangelical faith of one’s upbringing–and have arrived at quite different answers.

I began reading Stephen Bradford Long’s posts a few years ago, when he was just beginning to deprogram himself from the anti-gay beliefs that had severely traumatized him. In the beginning, he focused on developing and defending an affirming Christian sexual ethic. Later on, he branched out into explaining how Tarot was compatible with Christianity–a timely subject for me, since at that time I was also trying to maintain my old faith despite relying more and more on non-Christian spiritual practices. Somewhere along the way, he realized that he no longer believed in the Biblical God or the supernatural aspects of traditional religion. In a provocative move, Long came out this year as a follower of the Satanic Temple.

Now, before you start sprinkling your laptop with holy water, the Satanic Temple (not to be confused with the Church of Satan) is a secular humanist organization that adopts the symbol of the Christian Devil to challenge Establishment Clause violations and invoke a Romantic tradition of rebellion against religious repression. They’re the folks who protested a Ten Commandments monument at the Arkansas Capitol by installing a statue of Baphomet, a witty move to highlight the state’s unconstitutional favoritism toward one religion. According to NPR, the Temple “argues that public spaces should be free from religious messaging or be opened up to representations of all faiths, including Satanist icons.”

Satanism is originally a literary tradition rooted in the romantic poets, namely Hugo, Shelley, Blake, and Byron. These four poets were not themselves religious Satanists, but they were the first to recast the biblical myth of Satan in a positive, metaphorical light. In the throes of enlightenment, romanticism, and revolution, they saw the Satan of Milton’s Paradise Lost as the far more sympathetic and heroic figure. As Ruben Van Luijk notes in his book Children of Lucifer, “For radical sympathizers with the Revolution like Godwin and Shelley, Satan was no longer an evil insurgent against righteousness and cosmic order, but the mirror image and mythological embodiment of the revolutionary standing up against arbitrary and despotic power.” (pg. 77)

Similar to how the LGBTQ community has reclaimed the slur “queer”, Long embraces the demonic imagery that was once employed to fill him with self-loathing:

I’m gay, and it’s hard to describe what receiving this cultural story about homosexuality did to my psyche as I was growing up. I was told that homosexuality is the greatest and vilest perversion of the natural world, that I was demon possessed for loving men. I went through exorcisms. One Christian woman slapped my hand out of the air when I made a “disgusting” feminine gesture, which compromised my godly manhood. I was told that gay sex would open a portal to uninhibited and darkness within me. I was an abomination, just like Lucifer…

Owning Lucifer as my figurehead is now a defiant act of empowerment: it is an ownership of my minority status, a proclamation that the myth of my demonization was misguided, and claiming solidarity with the demonized everywhere. Claiming Satan as the heroic good is a deeply validating act when I myself have been deemed a monster because of cultural myth. I embrace my own goodness by recasting my father Lucifer as good, too.

In the Tarot, the Devil (depicted as Baphomet in the classic Rider-Waite deck) does not represent an external force of evil to be loathed and defeated. Rather, it symbolizes our repressed shadow side that we must integrate in order to be free from self-imposed bondage.

Spiritual integration is good for the abs, too. (Lucifer pin by Kate Sheridan)

Finally, Long chose a symbol from Christian iconography because he remains within the stream of the Christian tradition, though not as an orthodox believer. In his post “Giving Up on Calling Myself Christian”, he writes:

While I have utmost respect of people who can affirm the creeds, I now personally experience the truth claims of Christianity as intellectually insulting, and little more than untenable superstition…And yet I find the symbol, story, liturgy, and tradition of Christianity significant enough for me personally to not walk out of the church. Because of this, I think I personally qualify as at least *some* sort of Christian.

…I’m tired of fighting the faithful over my participation in their religion — a religion which is my tradition, heritage, and central guiding story. I’m tired of trying to stake my claim in Christianity, even though I still speak the liturgies, attend the rites, dream the symbols, and revere Christ.

But whatever. Too many of the faithful insist that I’m not in their club, and I’m tired of fighting them. To make the bickering stop, I’m shedding the term Christian, and adopting “Post-Christian” as a more accurate description: I can no longer affirm the central creeds of Christianity, but I am in a place accessible only by way of Christianity. I don’t think I will ever leave the church fully, but I will partake not as a Christian, but a Post-Christian. That seems like a compromise which makes everyone’s life (especially mine) easier.

This formulation gave me a way to categorize my complex religious identity. I’m a Christian the same way I’m a New Yorker. Manhattan, like Christendom, is a place that fundamentally shaped who I am, but I couldn’t live there anymore. There are things I miss about it that I can’t find anywhere else. When a certain song plays, or a characteristic smell reaches me (incense, burnt soft pretzels, the subway grating after rain), I feel satisfied and whole–for a maximum of 48 hours in the city, or 45 minutes in church, before something predictably makes me overwhelmed and stressed.

Though I chose the Devil as my Tarot Wheel of the Year card for 2019, I don’t feel the same bond with that figure as Long does. It has too many associations with the ritual abuse that some of my friends suffered. Moreover, I want to put my traumatic relationship with the Bible behind me, instead of remaining bound to it in an antagonistic way. For me, H.P. Lovecraft’s Cthulhu served the same purpose, an anti-God that doesn’t require literal belief in order to be effective at clearing away the gaslighting of an abusive Father’s “love”. 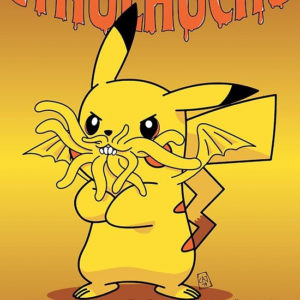 Meanwhile, Richard Beck at Experimental Theology is writing a series on “post-progressive Christianity”. Beck is a psychology professor at Abilene Christian University and a member of the Churches of Christ who also appreciates high-church devotional practices like the rosary. I recommend his book Unclean: Meditations on Purity, Hospitality, and Morality (Wipf & Stock, 2011), an exploration of the ethical problems with the purity paradigm in religion, with the reservation that his criticism of “boundaries” is not sufficiently informed by feminism or trauma theory.

Beck’s latest blog series points out some missing ingredients in the liberal Christian churches where many post-evangelicals wind up. Essentially, he argues that these environments don’t offer much that adds to the secular progressive worldview of their members. Liberal theology and preaching mainly emphasizes how our pre-existing political or intellectual commitments are compatible with (parts of) the Bible. We’re less likely to hear a faith-based challenge to the values and methods we brought in from outside the church. The absence of such a challenge can stunt our spiritual growth and make our religion irrelevant. Beck observes:

[M]any progressive Christians are biblically fragile. Almost every page of the Bible triggers a faith crisis, every Bible study getting stuck on what is “problematic.” The Word of God isn’t enjoyed as a location of delight and joy. The Bible isn’t a daily source of life, comfort, and sustenance…

Put bluntly, progressives don’t read the Bible much because they already know what the Bible is supposed to say. God is always being judged, criticized, and indicted by a progressive moral vision. Progressive Christians believe in morality rather than the God of Abraham, Isaac and Jacob. And when that happens the Bible is thoroughly tamed and captured by the progressive moral and political imagination. The Word of God is stuffed into a progressive moral box and is not free to startle, surprise, challenge, criticize, indict, unsettle, disturb and interrupt us…

From a prophetic aspect, while I still have questions and concerns about the Bible, as a post-progressive I spend less time questioning the Bible and more time letting the Bible question me.

Now, I absolutely agree with this. It was true of the Reform Jewish congregations I attended back in the 1990s before my baptism, and all the liberal-mainline churches I’ve been in. Back when I was an orthodox Christian, I often cited Lesslie Newbigin’s The Gospel in a Pluralist Society, where he says that the Resurrection is not something to be explained according to our existing ideas of how the world works. Rather, a Christian is someone who takes the Resurrection as starting point, and reorients their understanding of the world accordingly.

The difference between Beck and me is that the Bible is not the authority I want to be under–or to be more precise, not the sparring partner I consider most worthy and fruitful. I want to be taught and challenged, as much as Beck does. But the worldview of Scripture at worst is opposed to, and at best doesn’t prioritize, my core values of consent, sexual and neurological diversity, children’s rights, and the authority of personal experience. I don’t feel it’s ethically or psychologically healthy for me to put those up for debate any longer.

I commend Beck for stating the problem in such clear terms that may be disturbing to his progressive readers. And I wonder how his assessment of left-wing Christianity would change if he looked beyond majority-white denominations and theologians. James Cone’s Black Theology and Black Power and Renita J. Weems’ Battered Love: Marriage, Sex, and Violence in the Hebrew Prophets, both of which we studied in my church small group, engage boldly with Christian theology and Scripture from black liberation and womanist perspectives, treating the tradition with respect and expertise while being unafraid to depart from it where justice dictates.