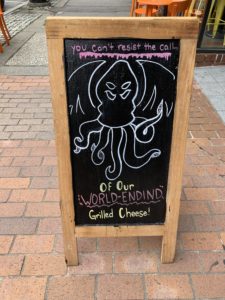 The spooky season of October seems like a good time to post my reflections on NecronomiCon 2019, the H.P. Lovecraft and cosmic horror fan convention we attended this August in Providence. Offered in odd-numbered years, this con delves into scholarly and popular media in the Lovecraftian tradition, while critiquing the xenophobic views of its progenitor. While the Young Master and Daddy explored Rhode Island’s beaches, I attended panels on such edifying subjects as the history of insane asylums and pop-culture depictions of shrunken heads. However, nothing I saw was quite as grotesque and unsettling as the SpongeBob cartoons that Shane made me binge-watch in our hotel room.

The Innsmouth Tabernacle Choir served up some new parodies of deep cuts from the Protestant hymnal, which unfortunately were unfamiliar to most of the Cthulhu Prayer Breakfast cultists. I for one am glad they recognized the ghoulish potential in “I Am the Bread of Life”.

Presiding over the breakfast, Cody Goodfellow, Anthony Teth, and Scott Jones opened with a rap battle about the relative merits of Dagon, Mother Hydra, and Shub-Niggurath, followed by sermons warning against blind faith and oversimplified ideologies. Like queer “camp”, which paradoxically employs the excesses of self-parody as a vehicle for intense and genuine emotions, modern Cthulhu-ism inhabits a liminal space, refusing to resolve itself into either mere satire or alternative religion.

The sermons made me wonder: What really is the difference between NecronomiCon and the Episcopal Church? (Not the outfits, certainly!) Minus the references to “Great Dragons Nug and Yeb,” I expect my fellow mainline parishioners would nod enthusiastically at the paeans to liberal open-mindedness. The Innsmouth Choir is merely more explicit about the same story we tell in the Bible readings and 1982 Episcopal Hymnal: the end times are coming, we’re all going to die, the earth will be destroyed, and we may go on to a strange new afterlife in transformed bodies if we appease the right wrathful deity.

In this apocalyptic political moment in America, the cultists’ honest acknowledgment of evil and impermanence was oddly reassuring. Refreshingly, Cthulhu-ism has a sense of humor about the absurdity of all human social structures–even the most powerful dictator or Pope is puny in cosmic terms–whereas the liberal church wants you to take its performances seriously even as it concedes that it has no divine authority over you.

I also wondered how many attendees were sincere believers in magic and monstrous gods, and how many were like me, dancing on that line between genuine faith and the defensive retreat into “just kidding!” when we fear that someone will try to exploit our new belief system as a tool of social control. One of the speakers on the Edward Gorey panel observed that the eccentric artist had a reputation as a difficult interview subject because he dodged any questions that tried to pin down the meaning of his enigmatic books. His work gains its power and lasting relevance from tension that is never resolved by a revelation. That could be one way I would define the queer aesthetic–allowing subtext to remain subtext, so that it can’t be stolen from you by reductionist interpreters. Indefinability as resistance to hegemony, perhaps?