Welcome back, readers. As suggestively-shaped-gourd season gives way to bedtime-at-4:30 season, I have been busy writing 30 Poems in November and reading the Winning Writers self-published books. So why not begin this overdue check-in with Judith Shulevitz’s piece in the November issue of The Atlantic, “Why You Never See Your Friends Anymore”:

The hours in which we work, rest, and socialize are becoming ever more desynchronized.

Whereas we once shared the same temporal rhythms—five days on, two days off, federal holidays, thank-God-it’s-Fridays—our weeks are now shaped by the unpredictable dictates of our employers. Nearly a fifth of Americans hold jobs with nonstandard or variable hours. They may work seasonally, on rotating shifts, or in the gig economy driving for Uber or delivering for Postmates. Meanwhile, more people on the upper end of the pay scale are working long hours. Combine the people who have unpredictable workweeks with those who have prolonged ones, and you get a good third of the American labor force.

The personalization of time may seem like a petty concern, and indeed some people consider it liberating to set their own hours or spend their “free” time reaching for the brass ring. But the consequences could be debilitating…A calendar is more than the organization of days and months. It’s the blueprint for a shared life.

The inability to set predictable boundaries around one’s non-working hours plagues workers both at the high end of the pay scale, where professionals are expected to put in 70-hour workweeks, and at the low end, where companies use variable scheduling algorithms to keep costs down, meaning that retail workers’ shifts change all the time. The conspiracy-minded might conclude that the weakening of community engagement is no accident. Shulevitz notes, “A presidential-campaign field organizer in a caucus state told me she can’t get low-income workers to commit to coming to meetings or rallies, let alone a time-consuming caucus, because they don’t know their schedules in advance.”

Michel Foucault’s “Friendship as a Way of Life”, a 1981 interview with the magazine Le Gai Pied, explores the radical potential of non-heteronormative sexuality to create ties of affection across social strata. (Hat tip to the podcast Food 4 Thot for the link.)

One of the concessions one makes to others is not to present homosexuality as anything but a kind of immediate pleasure, of two young men meeting in the street, seducing each other with a look, grabbing each other’s asses and getting each other off in a quarter of an hour. There you have a kind of neat image of homosexuality without any possibility of generating unease, and for two reasons: it responds to a reassuring canon of beauty, and it cancels everything that can be troubling in affection, tenderness, friendship, fidelity, camaraderie, and companionship, things that our rather sanitized society can’t allow a place for without fearing the formation of new alliances and the tying together of unforeseen lines of force.

I think that’s what makes homosexuality “disturbing”: the homosexual mode of life, much more than the sexual act itself. To imagine a sexual act that doesn’t conform to law or nature is not what disturbs people. But that individuals are beginning to love one another–there’s the problem.

The institution is caught in a contradiction; affective intensities traverse it which at one and the same time keep it going and shake it up. Look at the army, where love between men is ceaselessly provoked and shamed. Institutional codes can’t validate these relations with multiple intensities, variable colors, imperceptible movements and changing forms. These relations short-circuit it and introduce love where there’s supposed to be only law, rule, or habit.

In another example of radical queer potential, Colleen Tighe’s graphic narrative at The Nib celebrates that “Powerlifting Doesn’t Care What I Look Like”. I can attest that my own weight-training regimen, which focuses on what my body can do, rather than what’s wrong with how it looks, has been amazing for overcoming my internalized sexism and butch-shaming. Weight-lifting women and femmes can be loud, big, and powerful, smashing sexist taboos.

Meanwhile, at Refinery 29, this photo essay by Sadhbh O’Sullivan and Holly Falconer demonstrates that “Butchness Is Not the Opposite of Beauty–It’s a Kind of Its Own”. Interviewee Martha says:

When I was more neutrally presenting I didn’t experience that much harassment, but now it’s basically daily. It’s so acceptable to see butch women as ‘other’ and see them as wrong, gross, even dirty. I’m doing everything you’re taught not to do as a woman, and the harassment seems like a more culturally acceptable homophobia. I appear very clearly as someone who is rejecting being sexualised by men and their gaze.

Butchness has a history tied to working class women that’s very important to me. There’s a bit in Stone Butch Blues by Leslie Feinberg about the revolution around gay identities that happened in the ’70s and ’80s, which saw far more middle class lesbians taking over the community and rejecting the butches and femmes. It’s part of the reason why I’ve leaned into the butch identity. Being from a working class background also compounds the homophobia and butchphobia you’re confronted with, and it felt like there was much more stigma and shame. I didn’t know anyone who was a lesbian, I didn’t think it was a thing you could be until I was at university. But that’s why there’s something so important about being butch and participating in that cultural history.

My bio mom’s anxiety about being just one generation removed from the working class certainly exacerbated her negativity about butch traits in her partner and me. 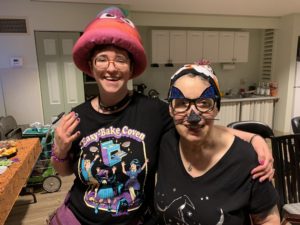 Living weird is the best revenge.