I don’t feel like taking life seriously this month. We all know what’s going on in the world. Let’s take a break to focus on something uplifting, like…“A Photo Study of Rock Gods’ Packages in Very Tight Trousers” (from the DesignYouTrust website). Marc Bolan is 100% transition goals–that pink crop top! that hairdo I actually wore in high school!–and Elvis is looking rather metrosexual himself in a frilly blouse.

Having penis envy yet? You’re not alone. Feminist pop culture site Jezebel celebrated “Doll Week” last October with “The Strange, Sad History of the Ken Doll’s Crotch”. While Barbie’s approximation of the female form has always been surreal, Ken’s bod is generally realistic in its proportions, with one exception that has frustrated many curious children. Rich Juzwiak writes:

Ken was not merely dickless by default; the bulge was the result of careful strategizing to which his inventors, businessmen, a psychologist, and Japanese manufacturers all contributed. Despite all this planning, Ken still came to represent things his parent company never intended, as icons tend to do. The story of Ken’s crotch is not merely one of PR, manufacturing, and/or branding—it’s about which realities our culture deems acceptable, and which that it seeks to keep hidden. This goes not just for the doll, but for the man he was named after, Ken Handler, who died in 1994 with major parts of his life airbrushed out of public view.

In keeping with her then-revolutionary idea that children wanted to try on adult roles through doll play, Barbie creator Ruth Handler advocated for Ken to have a bulge. It was toned down in the manufacturing process, but early Kens compensated with a slew of phallic accessories, from a baseball bat to a plastic hot dog on a long fork.

Mattel itself drew inadvertent attention to Ken’s lack of a penis when it released the notorious Earring Magic Ken in 1993. With his close-cropped blonde hair, shiny lavender vest with a matching mesh shirt underneath, and of course, earring, this Ken became a minor sensation amongst gay men who spotted the signs and claimed Earring Magic Ken as one of their tribe. And, as Dan Savage pointed out in a piece published a few months after the doll’s release, “hanging around Ken’s neck, on a metallic silver thread, is what ten out of ten people in the know will tell you at a glance is a cock ring.”

Meanwhile, Handler’s son apparently hated being the doll’s namesake. A bisexual musician and raunchy film director, he reportedly died of AIDS, though the Handler family suppressed the information in his obituary and still refuses to comment on it. Juzwiak quotes Erica Rand, author of the 1994 book Barbie’s Queer Accessories:

“What does it mean to think about this topic when we have a broader understanding of the relationship between genitals and gender? This idea that Ken is a man without a penis, what does that actually mean?” she said. “If we think now that in a way there’s no such thing as one male body, if you identify as a man, you have a male body, whatever parts you come with would be my view of things now. If you’re a trans man, you might not have come with what Ken didn’t come with either. If you’re a trans woman, you’re still a woman even if you started out life with a penis. That makes me think of things a little differently.” 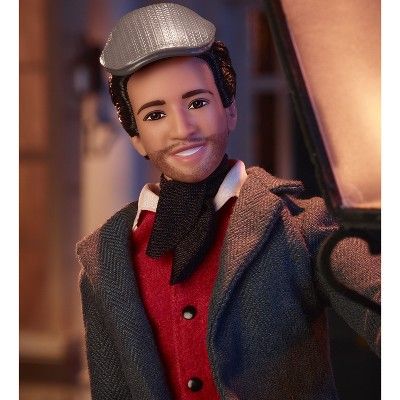 Alas, no amount of T-gel and deadlifts will give me the hard abs of a 60-year-old plastic doll. So I appreciate the Atlantic’s perspective that “Diet culture is just another way of dealing with the fear of death.” In her 2017 article “Eating Toward Immortality”, dietitian Michelle Allison argues that our obsession with finding the “correct” diet stems from a wish to repress the truth of our embodiment:

Eating is the first magic ritual, an act that transmits life energy from one object to another, according to cultural anthropologist Ernest Becker in his posthumously published book Escape From Evil. All animals must feed on other life to sustain themselves, whether in the form of breastmilk, plants, or the corpses of other animals. The act of incorporation, of taking a once-living thing into your own body, is necessary for all animals’ existence. It is also disturbing and unsavory to think about, since it draws a direct connection between eating and death…

…There are twin motives underlying human behavior, according to Becker—the urge for heroism and the desire for atonement. At a fundamental level, people may feel a twinge of guilty for having a body, taking up space, and having appetites that devour the living things around us. They may crave expiation of this guilt, and culture provides not only the means to achieve plentiful material comfort, but also ways to sacrifice part of that comfort to achieve redemption. It is not enough for wellness gurus to simply amass the riches of health, beauty, and status—they must also deny themselves sugar, grains, and flesh. They must pay.

Only those with status and resources to spare can afford the most impressive gestures of renunciation. Look at all they have! The steel-and-granite kitchen! The Le Creuset collection! The Vitamix! The otherworldly glow! They could afford to eat cake, should the bread run out, but they quit sugar. They’re only eating twigs and moss now. What more glamorous way to triumph over dirt and animality and death? And you can, too. That is, if you have the time and money to spend juicing all that moss and boiling the twigs until they’re soft enough to eat.

This is how the omnivore’s paradox breeds diet culture: Overwhelmed by choice, by the dim threat of mortality that lurks beneath any wrong choice, people crave rules from outside themselves, and successful heroes to guide them to safety. People willingly, happily, hand over their freedom in exchange for the bondage of a diet that forbids their most cherished foods, that forces them to rely on the unfamiliar, unpalatable, or inaccessible, all for the promise of relief from choice and the attendant responsibility. If you are free to choose, you can be blamed for anything that happens to you: weight gain, illness, aging—in short, your share in the human condition, including the random whims of luck and your own inescapable mortality.

However, the quest for the one true diet is an illusion because science is always developing and everyone’s body is different. Allison concludes: “This is why arguments about diet get so vicious, so quickly. You are not merely disputing facts, you are pitting your wild gamble to avoid death against someone else’s.”

At the literary journal Maudlin House, Julian K. Jarboe offers a darkly hilarious queer take on Kafka’s “Metamorphosis” in the story “I Am a Beautiful Bug!”. Right from the opening line, which turns an originally horrific premise into something to be desired, the story asserts trans beauty, self-determination, and survival in the face of obstacles that are all too real, as in this scene at the Registry of Motor Vehicles:

I frightened several people, but I felt so, so bad about it! I should have asked the plastic surgeon to make me invisible as well, if I were really smart and considerate, but I was foolish and selfish instead. The cries and commotion in the waiting room drew the upper managers from their offices. One manager introduced himself as the Director of Diversity and Inclusion.

“I’d like to personally apologize for the negative experience you’ve had,” he said, and swiped at me with the business end of a broom. “If you will come down, I’d like to see what we can do to make it right.”

“Let me have my picture taken without a permit?” I chirped.

“Other than that,” he said, and took another swipe, but the bottoms of my six feet were powerful suction cups and I would not budge.

“It seems unnecessary to have a third party confirm that I am a large insect when, indeed, it’s quite apparent,” I said. “It’s a tad invasive, speaking only for myself, but it must be extra paperwork on your side, too. You would not want to have a discrimination lawsuit on your hands.”

“We strive to treat everyone with dignity and equality at the Registry of Motor Vehicles,” the director said. “Though, you do realize the bug in the Kafka story is a metaphor, right? The author did not want the story illustrated. It’s meant to be ambiguous, symbolizing alienation and self-denial. The real metamorphosis of the title is actually the sister’s coming of age–”

“I am not a metaphor,” I said. “I need my driver’s license, and I would like to update my photograph, please.”

“I wrote a paper on Kafka in college,” the director scoffed. “I think I know what I’m talking about.” He climbed up onto a waiting room chair to get a better reach and aim on me with the broom. Just as he lunged it towards my head, I fluttered off the ceiling towards his head, bothered him about the face, and zoomed away over the snaking lines and out the double doors.

Buy Julian’s new story collection, Everyone on the Moon Is Essential Personnel, coming in March from Lethe Press.