The symbolism is too on-the-nose to be good fiction: America in the time of COVID-19 is observing Lent whether we want to or not. We are anchorites (if we’re being responsible, that is), sequestered for contemplation and mourning.

This can be especially hard because we don’t have a cultural template for nonresistance. Everything is supposed to be a battle. Obituaries say that someone “lost their fight against cancer,” as if we’re all obligated to treat the human condition of sickness and death as an adversary. The United States is rhetorically at war against drugs and terrorism, all the while exporting both of those misfortunes to countries that our leaders don’t care about. After a hate crime like the Orlando gay nightclub murders, the queer community shows our undefeated spirit by marching, celebrating, and coming out.

When I was living in NYC during 9/11, I remember it was scarcely a week before the banners went up along Seventh Avenue: “Fight back New York, go shopping!” Every tourist kiosk was hawking American flag pins and Death-to-Osama shirts within days of the attack. With the exception of a few anti-war protesters, as a culture we somehow decided instantly that the best response to a paradigm-shattering event was denial or aggression.

But the virus doesn’t care about our indomitable spirit. We aren’t proving anything, except our ignorance of biology, by tweeting defiant pictures of ourselves in a crowded bar. Stay the fuck home.

I’ve noticed a change in my attitude toward time and routine this week. The first couple of days I was panicking: holy shit I’m alone with my feelings and my 8-year-old. I don’t have regular TV and all my appointments are cancelled, how am I going to remember which day of the week it is? Then his wonderful hardworking teachers who should be paid a million dollars sent home a huge packet of homeschool curriculum ideas, and I realized, it’s too soon to return to the “normalcy” I thought I wanted. (Obligatory privilege check: I’m insanely lucky to have a work-from-home job already, and a yard to run the Young Master around in.) Let’s savor having nowhere to rush to. Let’s allow our brains to work only at half capacity because anxiety attacks are screwing up our executive functioning. Let’s tune in to springtime and the awakening earth. We’ll need that refreshment and spiritual strength when the news is scary, i.e. every fucking day. 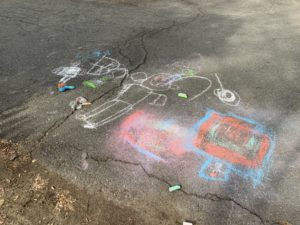 Make a shit ton of art.