The Poet Spiel, a/k/a the artist Tom Taylor, has spent eight decades taking aim at warmongering, corruption, and bigotry. He depicts the pleasures and absurdities of our physical existence in blunt, earthy language. He’s kindly permitted me to reprint this ever-timely poem below. Sorry to say that WordPress formatting limitations have stripped out his line indents. Check out his 2018 retrospective collection, Revealing Self in Pictures and Words, for more of his work.

Weigh a pint of the blood
of the homo soldier

splattered on his foe

also a hero
dying for his cause
his country
what he believes is right.

Tell all their kids
in pints, pounds, or buckets

the quantity of their loss.

Does a pint of the blood
of the homo at war

weigh less in a jar?

than a pint of blood
sapped from his foe?
or a pint of the stuff
from your average Joe?

Compare to a pint
of dirt or sand,
a pint of gold or a pint of lead.

Weigh a pint of the blood
of the homo soldier.

Phone his mother her son is dead. 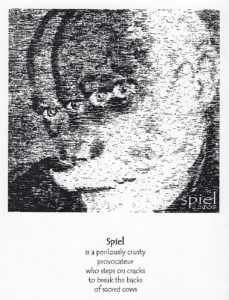 Self-portrait by the author. Used with permission.