The Western Mass. chapter of Equality Across America held a rally on the steps of Northampton city hall this week to demand that Congress pass a transgender-inclusive Employment Non-Discrimination Act (ENDA). One controversy surrounding this bill is the willingness of some gay-rights groups to accept a version that would not cover discrimination against transgender employees. They argue that a compromise bill would be easier to pass; however, the trans community is legitimately concerned that a stand-alone trans rights bill, if introduced separately at a later date, would never gain enough support.

There’s still a lot of misunderstanding of transgender people, probably because they’re even rarer than gays and lesbians, and often look different from the mainstream. On the issue of gay and lesbian rights, our society is slowly getting the idea that it’s wrong to stand in the way of marriage and family formation. We can relate to the anguish of being separated from the people we love. It’s less common to feel desperately out of sync with the gender expression that society expects from us. (Or at least, we don’t admit it, as we cram our feet into pointy high heels and nip and tuck ourselves to death!) As I get to know more people in the transgender community, and get in touch with my own discomfort with sexual stereotypes, I’m beginning to understand why the right to choose your gender expression is a basic human right.

Equality Across America is best known for organizing the National Equality March in Washington, D.C. last October. Their next planned action in our region will be the May 22 rally at the State House in Boston, urging passage of the long-stalled legislation that would add gender identity and expression to the Massachusetts civil rights law. If you live in our state, fill out the MassEquality web form to tell your elected officials to bring this bill to a vote.

Wherever you live, contact your representatives and senators today and tell them that you support fully inclusive federal protections for GLBT workers!

I took these photos with my BlackBerry while sitting on the City Hall steps holding my protest sign. 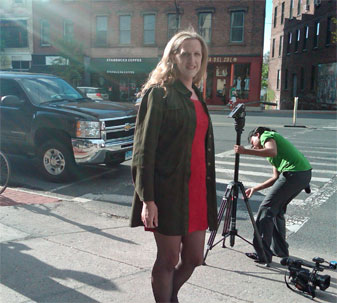 Co-organizer Gary Lapon (not pictured) is a Socialist activist, so our rally included signs for workers’ and immigrants’ rights. 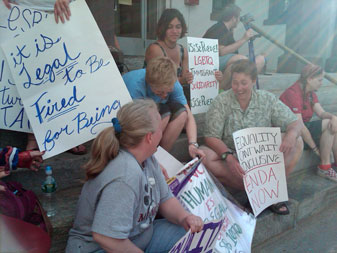 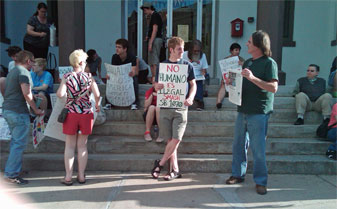 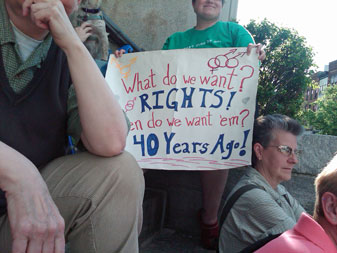 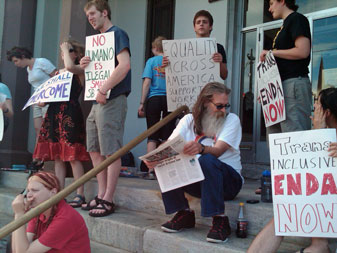 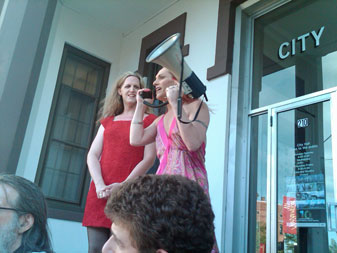 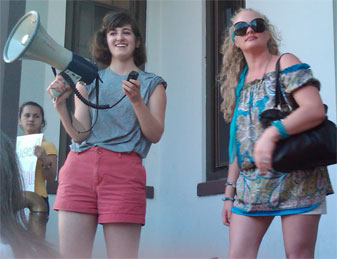 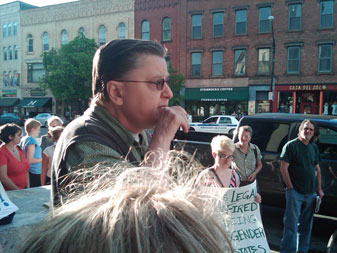 6 comments on “Photos from the Western Mass. Equality Across America Rally for Trans Rights”