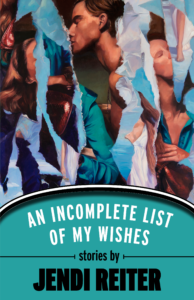 Feast your eyes on this lovely cover, courtesy of artist Ariel Freiberg and Sunshot Press editors Brent and Alexis Williams Carr! And now it can be yours for the low price of $12.95. (Kindle edition will be out later this fall.)

Diane Donovan of Midwest Book Review calls this book “a vivid literary and psychological collection especially recommended for those who like their stories passionate yet observational, their psychological depths presented in sips rather than explosions of flavor, and their stories nicely imbedded with social and spiritual reflection alike. An Incomplete List of My Wishes offers the kinds of inspections that leave readers thinking far beyond the curtain call of quiet dramas in lives lived on the edge of self-realization and social engagement.”

Read “The House of Correction”, a story in this collection that was just named runner-up for the 2018 Solstice Lit Mag Fiction Prize:

“I am going to this wedding,” Zebatinsky declared to Carla. His middling daughter. Middle. But the switched word lodged in his brain, as happened more and more these days, branching out tendrils of other words, a not unpleasant process until he was obliged to backtrack its meanderings to the conversation he’d left hanging. Carla in the muddle, middle-born between fiery David, now a banker in Hong Kong, and beautiful Natalie, who’d played piano in Carnegie Hall, found a husband, and died. Carla taught high school physics and nutrition at Bronx Science. She thought she knew everything about his prions. Or was that muons? He’d forgotten which were the particles that glued up your synapses, and which ones bombarded you without sensation, like a hand passing through a slide projection.

“How, Poppy? I can’t let you fly to Miami all by yourself. What if you get confused?”

Zebatinsky bit back a flippant remark. Getting confused in his own little apartment on West End Avenue and 94th, among the softly creaking shelves of books from thirty-five years of teaching Russian literature, was not only harmless but his privilege, his birthright, which middle-aged Carla was itching to trick him out of, with her sly talk of golf courses and assisted living centers in Connecticut. On the other hand, getting confused in a too-loud, too-bright airport that stank of sweet coffee and porta-potty deodorizer was not an adventure he cared to repeat.

“You’ll come with me. See, it says ‘Isaac Zebatinsky and guest.’” He pointed to the handwritten address on the square ivory envelope, the words scrunching together toward the end as if the writer had miscalculated the size of the small paper. “It’s a weekend. You can do your lesson plans on the plane.”

Carla blinked hard, her way, ever since childhood, of disguising a sudden hurt. See, he was still sharp enough to notice the important things. A mixed blessing because awareness included guilt for his unintentional dig. She didn’t want to tell old Poppy why she was single in her forties but it must bother her more than she let on. Perhaps that excused the tone of her question: “How do you know the Abramoffs, anyway? I don’t remember them.”

He sighed, buying himself some time with the implication of a long and emotional story to come, as he studied the invitation’s embossed sea-blue script: Rabbi and Mrs. Gershom Abramoff welcome you to celebrate the marriage of his daughter Sarah Nicole Abramoff to Jasper Michael Shapiro on Saturday, February 23rd, at 6:30 PM, Temple Shaarei Tefilah, followed by an address in Miami. The truth was, Zebatinsky had no idea who these people were…