For my novel research, this weekend I went to NYC for Flame Con, billed as the world’s largest LGBTQ comic con. Now in its fourth year, Flame Con is sponsored by Geeks Out, a volunteer nonprofit dedicated to making comics and sci-fi fandom more welcoming for us queers. As the title of one panel put it, I experienced “the subversive simplicity of queer joy”.

Flame Con was way more fun and friendly than any literary conference I’ve attended. Poets can be so bitter, present company not excepted. We trail clouds of angst about whether our work is important enough and whether our publishing deal is as good as someone else’s. At Flame Con I rediscovered the happiness of making things you enjoy and meeting other people who are doing the same. We were like children in the best sense, unselfconscious about loving sparkly ponies and superheroes, simply grateful to spend time in the fantasy worlds we created.

It was a delightful novelty to be in a social setting where I felt completely cool and like I fit in. Imagine that every time you get into the elevator in a large Manhattan hotel, someone else is also wearing a butch haircut, rainbow jewelry, or a tank top with a sassy gay slogan. I got a compliment on my glasses, y’all.

At the trans and GNC meetup, about 40 of us sat around a workshop table, two rows deep, and threw out joking answers to the question, “What is the trans agenda?” Hint: it involves a lot of fanny packs. People connected over the shared experience of renaming themselves after comics and video game characters, obsessively listening to “Reflection” from Mulan, and using FaceApp to envision ourselves as the “opposite” sex. 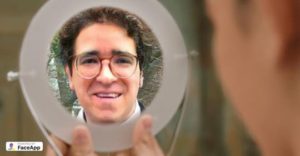 At the Queer Nerd Poetics reading, I heard funny and passionate performances by fine writers who were new to me. I especially enjoyed Liv Mammone’s persona poem about the lack of handicapped access at the Louvre, “Venus de Milo Answers a Tumblr Feminist”. Liv really knows how to write a catchy title. Read an interview with her at Brooklyn Poets and follow her on Twitter. Omar Holmon of Black Nerd Problems spoke out in verse about the challenges of loving a genre where you don’t often see yourself reflected. Brendan Gillett, dressed as a dapper elf, graciously emceed and closed out the show with “Names for Months in a New Queer Year”. Happy Augayst, everyone!

I spent several hours at the exhibitors’ hall, making contacts to interview for the novel about the 1990s indie comics scene, and buying a ton of books and swag. G. Pike designs beautifully colored pins, keychains, and stickers depicting birds in the hues of various pride flags. Pride Pets enamel pins from Gay Breakfast feature different breeds of adorable cats and dogs with pride flag stripes, and pronoun pawprints, too. I met public health consultant Christel Hyden, the educator behind Heads or Tails NYC, an interactive webcomic about HIV prevention. And I bought this shirt from Hiroki Otsuka, because apparently I’m into bears and tentacles now?? Is this a thing that happens with middle age? 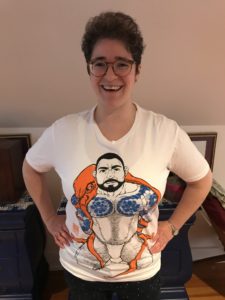 Ready for Chippendale’s of Arkham.

Continuing on that theme, I bought Kori Michele Handwerker’s Undone: A Tentacle Illustration Book, an elegant black-and-white art chapbook reminiscent of Aubrey Beardsley; the first issue of Megan James’ comic book Innsmouth, which the artist described as being about incompetent Mormon-style Cthulhu cultists; a pin-up of a sweet hairy dude in purple high-heeled boots by Joel Gennari; and the erotic art anthology Doable Guys III. Check out Kori’s webcomic about discovering their nonbinary fashion style. Offsite at the BGSQD bookstore, I attended the book launch of the groundbreaking collection We’re Still Here: An All-Trans Comics Anthology from Stacked Deck Press, edited by Jeanne Thornton and Tara Avery–which, now that I think of it, I probably also backed on Kickstarter. Well, if I end up with two copies, I’ll donate one to Forbes Library. I also picked up collections and graphic novels by Molly Ostertag, Tony Breed, Jessi Sheron, and others.

The convention wasn’t all NSFW by any means. Diverse, upbeat books for children and tweens were well-represented too. I bought Shane a Lumberjanes collection and a Warriors graphic novel about magical cat clans. Let the geek family traditions begin.