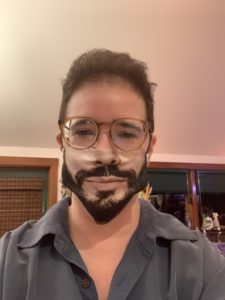 (Get your own man face at AxeandCo on Etsy)

Sci-fi novelist Isaac R. Fellman wins the Internet for 2020 with his July newsletter post, “Peggy Olson Is a Gay Trans Man”, which explains why she was the only female TV character I’ve ever fully identified with.

Peggy is so utterly dissociated from the flesh of Peggy that she can carry a baby to term while pretending, even to herself, that she is just putting on weight…

It’s not just that Peggy is willing to endure all kinds of things — Joan’s cruelty about her body, a pregnancy without medical care, the logistics of a new wardrobe, the bearing and giving up of the child, becoming a temporary ward of the State of New York — in order to avoid more conventional humiliations. It’s also that she endures them, does her usual hard course of work, gets through it stoically, because the alternative is acknowledging the life of the body…

Peggy rather famously spends the whole series trying to figure out how to be a woman. I would argue that her process here — which, like her process of fucking, is all about patterning and identity theft — nonetheless has a very different vibe from her relations to men… [T]he series is littered with the bones of women Peggy has tried to bond with, with all the sincere good will and feminist consciousness in the world. Peggy likes women, is politically aligned with women, makes a career of selling products to women. Peggy’s friends are men.

If we look closely at the example that you characterise as “mainstream” we can see that a domain of fantasy is at work, one which reflects more about the feminist who has such a fear than any actually existing situation in trans life. The feminist who holds such a view presumes that the penis does define the person, and that anyone with a penis would identify as a woman for the purposes of entering such changing rooms and posing a threat to the women inside. It assumes that the penis is the threat, or that any person who has a penis who identifies as a woman is engaging in a base, deceitful, and harmful form of disguise. This is a rich fantasy, and one that comes from powerful fears, but it does not describe a social reality. Trans women are often discriminated against in men’s bathrooms, and their modes of self-identification are ways of describing a lived reality, one that cannot be captured or regulated by the fantasies brought to bear upon them. The fact that such fantasies pass as public argument is itself cause for worry…

We depend on gender as a historical category, and that means we do not yet know all the ways it may come to signify, and we are open to new understandings of its social meanings. It would be a disaster for feminism to return either to a strictly biological understanding of gender or to reduce social conduct to a body part or to impose fearful fantasies, their own anxieties, on trans women… Their abiding and very real sense of gender ought to be recognised socially and publicly as a relatively simple matter of according another human dignity. The trans-exclusionary radical feminist position attacks the dignity of trans people.

Did you know that the notable 20th-century writer and critic Dorothy Parker was a civil rights activist? Me neither, till I read this news item from the NAACP:

For over three decades, the NAACP headquarters in Baltimore, Maryland, served as the resting place for Dorothy Parker. Forever etched into the NAACP’s history and legacy, the American poet, writer, critic and satirist was a fierce supporter of civil rights and social justice during a critical era in our nation’s history.

At a time when the country was in the midst of a social movement for civil rights and equal protection, Parker gave to a cause she believed in by bequeathing her estate to the Rev. Dr. Martin Luther King Jr., and providing that upon his death, the estate would pass to the NAACP. The NAACP continues to benefit from her gift by licensing the use of her works.

Born in Long Beach, New Jersey, Parker rose to prominence for her literary works published in such magazines as The New Yorker and as a founding member of the Algonquin Round Table, a group of New York City writers and critics. In 1932, Parker found success in Hollywood as a screenwriter. Among her accolades, she received two Academy Award nominations and worked on more than 15 films.

Throughout her life, Parker grew to be a vocal advocate of civil liberties and civil rights. In 1988, under the leadership of then-NAACP President Benjamin Hooks, Parker’s remains were interred at the NAACP national headquarters in Baltimore and remained there for 32 years.

Preserving the legacy of Dorothy Parker has been an essential part of the NAACP’s history. At the request of her family, which coincided with the NAACP’s planned moved to Washington, Mrs. Parker’s remains were re-interred in a family plot at Woodlawn Cemetery in New York on Aug. 22, 2020.

What might Parker have said about Rowling? Perhaps “She runs the gamut of emotions from A to B.” Or, “Heterosexuality is not normal, it’s just common.”

At the Forward, a venerable Jewish magazine, Abigail Pogrebin asks the provocative question, “Does God’s gender matter?” A journalist and former producer for “60 Minutes” and “Charlie Rose”, Pogrebin is also the daughter of Ms. Magazine co-founder Letty Cotton Pogrebin. Here, she talks with Rabbi David Ingber of the progressive congregation Romemu in Manhattan.

The text he sends before our interview, (I ask each teacher to choose one) is a midrash, or rabbinic commentary, from the 6th century, in which a sage known as Rab Kahana analyzes the First Commandment: “I am the Lord, your God.”

Kahana suggests that when God asserts, “I am the Lord,” it’s to clarify not only that God is one, but God is all. We should not assume the Lord takes one shape or is found in just one place.

Ingber builds on Kahana’s analysis: if the Lord our God has multiple iterations, the Lord is therefore not one gender at all times.

It’s not because of some feminist principle that Ingber seems to suggest this, though he’s known for an egalitarian approach to traditional observance. Instead, Ingber says that asking whether God is male or female is the wrong question. God takes any form you need God to take. And the midrash gives us permission to find — or feel — God in whatever form speaks to us.

Why would the first thing God tell the people of Israel be, I am the Lord your God? There must be a hidden reason. The rabbis are imagining a God who is really concerned that the people not be confused by the polymorphic nature of God. Will the real God please stand up?

So this text is decidedly trying to say, ‘I appear in multiple places, in different ways, but they’re all me.’ God is saying, ‘You can see me as your aunt or uncle, your father or mother. You can see me as a God who at one time feels like a stern disciplinarian and another time feels as a loving, compassionate comforter. All of these faces are legitimate expressions of who I am.’

Covenant is the weblog of the Living Church Foundation, an independent nonprofit ministry within the Episcopal Church. Hat tip to Scott Gunn, executive director of Forward Movement and one-half of the Lent Madness team, for tweeting this Covenant article by lay theologian Elizabeth Anderson: “The Priesthood of All Believers: The Uses and Abuses of a Doctrine”. Anderson critiques a phenomenon that I’ve noticed as well. Despite the Protestant belief that everyone has a ministry, non-clergy are often kept in social service roles, not allowed to influence the church’s theology or offer spiritual direction. “[A]ll of these false binaries — sacred/secular, spiritual/material, contemplation/action, Church /world, clergy/laity — imply a kind of dualism that is fundamentally incompatible with orthodox Christianity.”

Tor has a relatable new post at Speaking While the World Sleeps: “Defined by Future Regret: Survivors’ Autonomy”. As child abuse survivors, we question (and are constantly questioned about) how we can know ourselves well enough to transition. I often say that the “always already a boy” narrative doesn’t fit me, because there was never a time when I had access to an uncontested selfhood.

Tor observes that these questioners are far too concerned about us regretting non-heteronormative choices, while the real thing worth mourning is the years of authenticity we lost.

As much as people fixate on survivors who talk about, say, transitioning, and regretting it because it was “just because they were abused” I’m betting it’s far more common that trans survivors are like me, wishing they can been capable, emotionally, and mentally, of going on hormones years ago. But our regret only matters when we make active decisions about our life, when we assert our will over our bodies, not the passive regret that at least makes us fall in line within socially acceptable parameters of existence…

And in doing so, we make it difficult for survivors to grasp at the normalcy of regret.

What I mean is: when you get to the end of your life, you’re always going to have choices you wish you’d taken and choices you wish you hadn’t. That’s what it means to be capable of choices. But survivors are encouraged to see their every regret as an aspersion on their capacity for reason, their decision-making as fully autonomous human beings…

Part of coping with abuse is understanding that there isn’t an “underneath” self who would make perfectly correct choices, who knows with pure clarity exactly who they are, who is so self-assured that they will never guess wrong about their own needs or desires, if only there wasn’t the trauma mucking things up. It’s understanding that messiness is a part of being human. And so is regret.