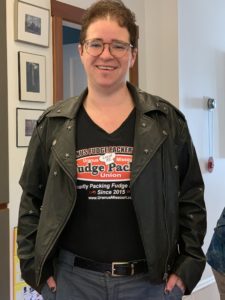 One year ago I began HRT. I’m really happy that I did. It’s been something positive to think about during our year of national disasters. Like slowly but steadily assembling a jigsaw puzzle, monitoring the growth of my tiny soul patch gives me a sense of clarity and empowerment when life feels out of control. I wake up grateful and believing in magical manifestation. (And also terrified of being sneezed on by fascists, but that’s 2020.)

I understand “gender euphoria” now because I enjoy being photographed, for the first time since before puberty. A lot of days I walk down the street feeling like John Travolta in the opening scene of “Saturday Night Fever”. But dysphoria is also heightened sometimes, since the more I let myself realize what I want, the more I feel the grief of not having had it sooner, and the anticipatory disappointment that I may never fully achieve it. I can stop policing my own body language as insufficiently graceful and delicate, and worrying that I’m not pretty because I’m fat–but I sometimes make myself equally self-conscious with fears that my vocal intonation, head tilt, or stance aren’t masculine enough. Then I remember I’m a gay nonbinary trans guy and this is all cis-heteronormative brainwashing. In general, being more present in my body heightens all sorts of emotions, positive and negative.

Until recently, I felt that medical transition was completely out of reach. My adored husband, whose masculinity is not threatened by the fact that I now have more leg hair than him, loves boobs and hates beards (on me anyway). Without top surgery and whiskers, I didn’t think I would ever “pass”, so why give up my privilege as an average-looking woman? But last summer my gender therapist sent me some articles about micro-dosing T for that androgynous look. That seemed like a compromise everyone could agree on, so I made an appointment with an endocrinologist and started the gel in October. Hello, little chin hairs and constant horniness.

Thank our terrible American health care system for what happened next. My little bottle of Love Potion Number 9 cost $375 a month with insurance, while the more common delivery method of weekly injections was one-tenth the price despite generating more medical waste. Get you a man who’ll buy you a sharps disposal container for Valentine’s Day. Results from the gel had leveled off; my voice wasn’t deepening and I didn’t see any muscle growth. Hubby and I attended the trans conference First Event in Boston in February, which clarified for both of us that I wanted to progress further down this path, and that other couples had successfully adapted.

In February I started injections. I quit for a little while because the injection site in my thigh hurt a lot for several days afterward. My trans support group leader suggested alternatives. Never been so glad to have a fat butt. Results from the new method: wider face, deeper voice, arm muscles, somehow lost 10 pounds (though that could be because I haven’t had onion rings since the restaurants were closed for COVID), annoying neck pimples, minor bisexuality, general sense of wellbeing.

Whither the future? Well, except for top surgery, I expect to go through the usual stages of transmasculinity: baseball caps, writing an autobiographical webcomic, Satanism. Meanwhile, some life hacks for my fellow bois:

Wearing men’s underwear (by which I mean, underwear for men, though if you want to bring home other men and put on their underwear, good on ya) brought me a surprising amount of gender euphoria. Jockey’s boxer briefs have a nice pouch in front that make you look like you’ve got a real package. Plus, their browser cookies will make pleasantly distracting images of male bulges follow you around when you’re reading the news online.

Compression sports bras are a comfortable alternative to binders. Brooks Running makes a nice one.

Follow Phil Powell (@DandyYour), Queer Eye‘s Jonathan Van Ness (@jvn), Jeffrey Marsh (@thejeffreymarsh), and Pose star Billy Porter (@theebillyporter) on Twitter to remember that you don’t have to give up beauty and bling.

2 comments on “My Tran-niversary: One Year on T”