2014 has been a year of self-transformation. I became a redhead and got a lion tattoo. I finished a major revision of the Endless Novel. I hope to finish-finish it for real in early 2015, after I nail down the details of my new poetry book launch and marketing plan. My second full-length poetry book, Bullies in Love, is forthcoming in March from Little Red Tree Publishing. Even the blog got a makeover, migrating from GoDaddy to WordPress with the expert assistance of design firm Tunnel 7. 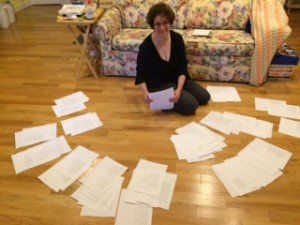 Rearranging my poetry manuscript on the office floor, December 2014.

Why has this year been so good for my creativity and personal growth? Folks, trauma recovery really works. Trust yourself. Phase out relationships with people who gaslight and invalidate you. Find a spiritual practice that makes a safe container for you to feel anger, grief, and the love of God. And try to spend some time roughhousing with a toddler. (Kittens work too.)

Here are some more highlights from this year’s reading, writing, and other discoveries.

I’ve read so many fine collections this year, it’s hard to choose. Some favorites by Charlie Bondhus, R.T. Castleberry, Heather Christle, Ruth Thompson, and Pam Uschuk have been reviewed and excerpted on Reiter’s Block this year. Other notable books that I didn’t get to feature:

Brian Teare’s debut collection The Room Where I Was Born (University of Wisconsin Press, 2003) uses dark fairy-tale and gritty Southern Gothic tropes to tell, undermine, and complicate a confessional narrative of sexuality and trauma.

Nin Andrews’s Why They Grow Wings (Silverfish Review Press, 2001) lets loose the divine feminine in magical-realist scenarios that are both playful and politically edgy.

Donna Tartt, The Goldfinch (Little, Brown & Co., 2013). This Pulitzer-winning doorstop of a novel received equally intense yays and nays from critics. Based on Northrop Frye’s classic taxonomy of genres, I think Tartt’s detractors make the mistake of treating her books as realist novels when they’re really romances, notwithstanding the super-abundance of contemporary detail. I loved this book because it captured the feeling of growing up in New York City with more dreams than money. Tartt’s New York, like mine, is home to many social classes and subcultures living in close proximity but rarely intersecting. The first half of the book emphasizes the distance between these worlds and the illusions we spin about those who seem more fortunate than ourselves. Then a series of tragicomic twists brings the protagonist out of his grandiose isolation and into a humbled awareness of our common fate.

Michelle Alexander, The New Jim Crow: Mass Incarceration in the Age of Colorblindness (The New Press, 2010). This comprehensive study of racism in the criminal justice system is a must-read, particularly now, following the outcry over police brutality in Ferguson, MO.

Why Believe in a Need-less God?
It’s a leap from “God doesn’t need Hir ego stroked”* to “God doesn’t need anything from us.” This doctrine, which we take for granted as orthodoxy, has hidden negative political and pastoral consequences. Because of what I’ve learned from feminist and disability theology, I am compelled to question the equating of “need” with weakness, imperfection, or immature egotism.

Becoming Church: My Field Trip to an Intentional Christian Community
Becoming Church is an umbrella organization for small-group churches (a dozen people maximum) that follow the Church of the Saviour model of “journey inward/journey outward“. Grounded in their faith in Christ, members support each other’s personal spiritual transformation and work together on service projects in [Washington, DC]. Their vision for social change is both radical and humble. Radical, because they want to be used by the Spirit to attack systemic injustice. They’re not content to provide palliative care to the less fortunate, or as they prefer to say, “the under-resourced”. Humble, because they try to operate on God’s timetable, not their own, and eschew ambitious arms’-length initiatives in favor of intensive long-term relationships with a few needy individuals at a time.

I’ve binge-watched all 6 1/2 seasons of Mad Men since July. This show’s deep resonance with me deserves its own blog post in the near future. For now, let me just say that Peggy, played by Elisabeth Moss, is the first female character on TV that I really identify with. She’s socially awkward, ambitious, creative, blunt-spoken, willing to make enemies, unashamed of her climb from working-class Brooklyn Catholic schoolgirl to Manhattan ad executive, has a weakness for ugly plaid outfits, and secretly wonders whether she’s failed to perform femininity properly. Near the end of Season 7A, she anticipated the concept of “family of choice” to sell fast-food hamburgers to modern women.

I used to be afraid of my chronic nightmares. Now, before I fall asleep, I imagine Peggy showing up in my dreams to kick ass. That recurring dream about being stranded on the highway? No problem. Peggy will give me a ride and bring bail money, just as she did for Don Draper when he crashed his car on a drunken joyride with his mistress. I’m sleeping much better now. 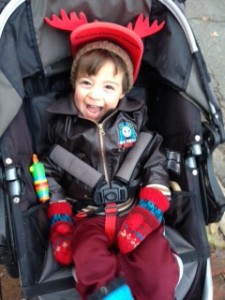